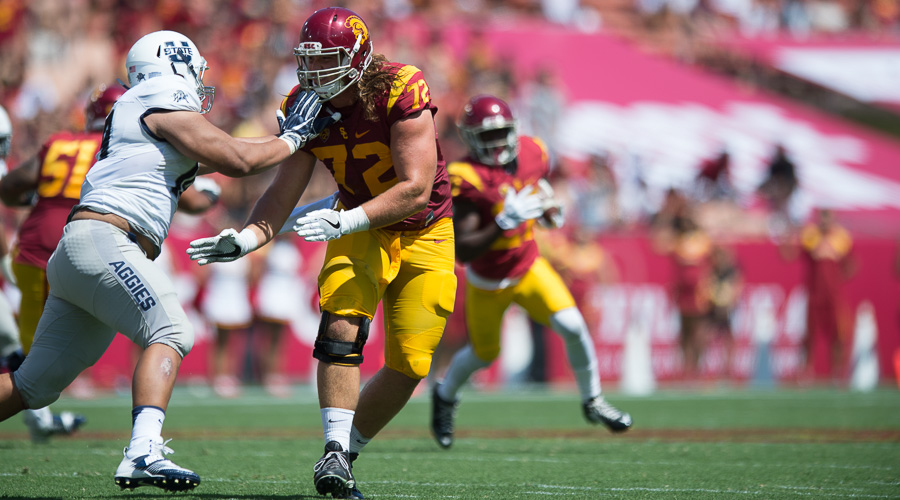 After a rocky start, USC has managed to turn things around, with the team’s current three-game winning streak serving as proof.

One position group that has played a major role in the Trojans’ revival is Neil Callaway’s offensive line corps, which struggled early before coming together to perform at a high level as of late – just as many expected prior to the season, when a number of pundits pegged the unit as one of the nation’s best.

“This is the group that has improved with every week and I think is playing their best ball to date,” said USC head coach Clay Helton. “We’ve made this three-game run right here, and I think a lot of that is due to the offensive line’s performance.”

And while it has come against lesser competition when compared to the teams that they faced early on, the evidence is still in the numbers. The Trojans offensive line has allowed just one sack during the current win streak. They’ve also spearheaded a ground attack that has averaged 222.3 yards per game in that same time span, after averaging 143 yards per game in the team’s first four contests.

Coinciding with the unit’s improved play has been the reemergence of fifth-year senior left tackle Chad Wheeler. USC’s most experienced offensive lineman with 39 starts to his credit, he missed almost all of fall camp due to plantar fasciitis, which continued to hobble him through the early portion of the schedule, forcing him to serve in a reserve role in the first two games of the season.

Since having been re-inserted into the starting lineup in Week 3, however, the 6-foot-6, 312-pound Wheeler has provided USC with a solid veteran presence at his normal left tackle spot, particularly over the last three games.

“He’s played a lot of ball, he has a lot of experience here, and he’s playing his best football right now,” Helton said. “He’s really been a student of the game this year, he’s really invested in himself, and you can see it in his play. I hope it continues for him. He’s making us a better team right now.”

But after missing so much time, Wheeler admits that returning to action didn’t come without its challenges.

“I wasn’t really confident – that’s what camp is for, to get you confident and ready to play against good teams,” Wheeler said. “Coming off that injury I had to build up by repetition how I was going to perform in the game.”

Now feeling better than ever, physically, it’s safe to say that Wheeler has been able to not only get back into the flow of things, but to also take his game to a new level.

Wheeler gives much of the credit for his overall improvement to Callaway, who ironically, is the fourth offensive line coach that he has played for in as many seasons.

“Shout out to Coach Callaway, there were a couple screws loose in my technical game, and he’s helped me out with those,” Wheeler said. “Just technique-wise, I think he’s the best coach that I’ve had.”

Wheeler also believes that age and experience has something to do with the strides that he’s made.

“I’m listening better and just maturing more,” Wheeler said. “I heard that tackles reach their peak at 28, so I’m just trying to develop every week.”

With his history, Wheeler might seem like a natural leader, and while he has taken on that role, he hasn’t done so in the traditional sense. One of the quieter, more reserved members of the team, he leads not through words, but instead through the example that he sets each and every day on Brian Kennedy-Howard Jones Field.

“I try to lead by actions – being on time early to everything, just taking every rep seriously,” Wheeler said. “I only have like five weeks left on this field, so every single second counts.”

With the Trojans now in the midst of the final half of their schedule, Wheeler is determined to carry that same mindset with him throughout the rest of the season – all with the goal of helping his team to continue to compile victories so that he can end his USC career on the right note.