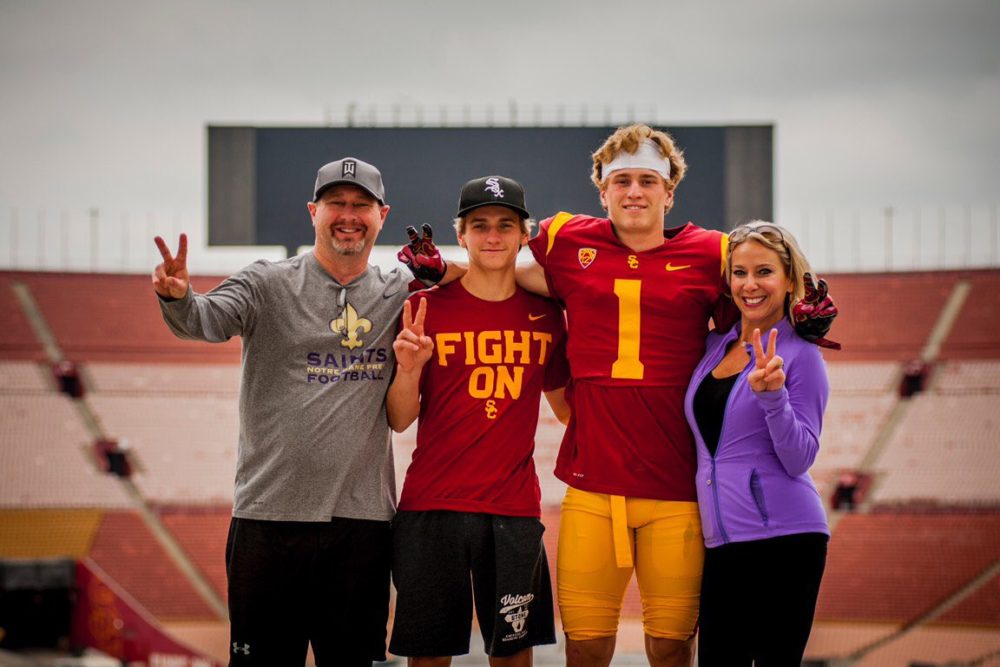 There are always differences between the spring and fall rosters with the addition of a bulk of the incoming freshmen. But the number of players who have taken advantage of the transfer portal means there will be more new faces than ever across college football when it comes time for fall camp. With less than a month to go before the Trojans officially open up preparations for the 2021 season, here is a position-by-position look at the changes to the USC offensive personnel so far, compared to what was on the field for spring ball.

Spring was about seeing whether Kedon Slovis was back to his freshman form and how ready the two early enrollee freshmen might be. Fall will come with similar questions, though Slovis did show he should be ready to assert himself as the best quarterback in the conference and both Jaxson Dart and Miller Moss had flashes of solid play (Dart bordering on spectacular at times).

While Slovis will still be under a watchful eye as he bounces back from an up-and-down 2020 season, this is all about the backups and USC will have a new name to watch here. With Mo Hasan out for the season after tearing his ACL during the spring game, USC looked to bring in a quarterback this offseason and found one in Oklahoma State transfer Brendan Costello.

The 6-foot, 192-pound Costello will walk on at USC, giving the Trojans a boost as a scholarship-level player similar to what they had with Hasan. Costello never took an in-game snap with Oklahoma State, but he was a three-star recruit out of San Clemente High School and drew interest as a transfer from Indiana, Michigan State, Utah and others. It will be very interesting to see where Costello falls in the pecking order. It’s likely that either Dart or Moss is the future behind center for the Trojans, but having the safety net of a third-year player — even one who hasn’t seen game action — means USC won’t necessarily need to go straight to a true freshman if Slovis is on the sideline for any reason.

The running back position saw a significant change before the spring, with the arrival of Keaontay Ingram from Texas and the departure of Markese Stepp to Nebraska. There has been some post-spring movement at the position as well, with another round of addition and subtraction.

Out is veteran back Stephen Carr, who elected to transfer to Indiana for his final season. In is former TCU running back Darwin Barlow, who ran for 428 yards and four touchdowns last season but saw his time cut by standout freshman Zach Evans.

Kenan Christon isn’t a new name to the roster, but he’ll be a welcome sight after he missed spring ball while participating in track.

How this depth chart shakes out will be an interesting watch, especially since so much of the talk about it will be in reference to position coach Mike Jinks’ statements referencing that he won’t split carries evenly between a handful of backs and will be looking for a lead back or two to carry the load. Ingram (who had a terrific spring) and Vavae Malepeai look as though they could be the guys called upon first, but Christon, Barlow and true freshman Brandon Campbell offer ready-to-go options that bring some speed and pass-catching elements that the offense could use right now.

USC will welcome former Texas wide receiver Jake Smith and former Memphis wide receiver Tahj Washington to the fall roster, and competition for playing time will be fierce and immediate.

Drake London has a starting spot sewn up and will likely be moved around inside and outside this season. There is plenty of evidence that Bru McCoy and Gary Bryant Jr. will be big-time contributors this season, though McCoy fought injuries for much of the spring. The hope is that Kyle Ford can get back to full health and become an impact player because the potential there is immense. He did not participate in any contact drills during the spring. True freshman Michael Jackson III did, however, and was one of the stars of spring ball. It’s tough to imagine he won’t factor in at least a little bit this fall.

But there was a clear plan to go out and get some dynamic speed receivers in Smith (6-foot, 200 pounds) and Washington (5-foot-11, 175 pounds), who can both take short passes the distance and also take the top off defenses as deep threats. They’ll be joined by Kyron Ware-Hudson and Joseph Manjack IV as true freshmen additions this fall, and the Trojans should be able to find some capable replacements for Amon-Ra St. Brown and Tyler Vaughns in that group, though how quickly the new additions mesh with Slovis will be something to watch. St. Brown and Vaughns had such an understanding of the offense and an obvious rapport with Slovis that will be challenging for the new additions to match right away.

Munir McClain was not with the USC program during the spring, but his departure was made official this offseason with his announcement that he’s headed to Utah.

USC brings everybody back at tight end and it is a loaded group in terms of talent. Erik Krommenhoek and Josh Falo will serve as veteran presences and hopefully the Trojans can get Jude Wolfe and Ethan Rae on the field fully healthy for significant stretches. Early enrollee Lake McRee was impressive this spring and looks like a future contributor. But USC coaches obviously weren’t completely settled at the position and brought in Texas transfer Malcolm Epps, who has played both wide receiver and tight end during his college career. He was much more effective as a big outside receiver than at tight end, but USC has that big inside receiver role that London has been so effective playing the last two years.

But the guy to watch here is incoming freshman Michael Trigg, a four-star tight end signee who plans to play basketball at USC and might be a slightly shorter but thicker version of London. The hybrid tight end position at USC seems to be a perfect fit for Trigg and while it might be asking too much for a true freshman to come in and beat out all those veterans in the group ahead of him, few incoming freshmen will be watched as closely as Trigg this fall to see if he can make a quick impact.

Thus far, there has been no movement on the offensive line through the transfer portal for USC. That means the additions this fall will be in the form of the three freshmen signed in the 2021 class — Mason Murphy, Maximus Gibbs and Ty Buchanan.

It’s unlikely any of the three will make a real push to see time this season, but Murphy and Buchanan are very intriguing additions right now and Murphy could have the size and ability to start getting some meaningful reps at one of the tackle spots fairly early in his career. So much of what Gibbs is asked to do will depend on conditioning and where he is physically when fall camp starts, but the footwork and athleticism is there for a guy who was listed at 6-foot-6, 385 pounds as a recruit. If he can find his way to playing shape, the upside is there.