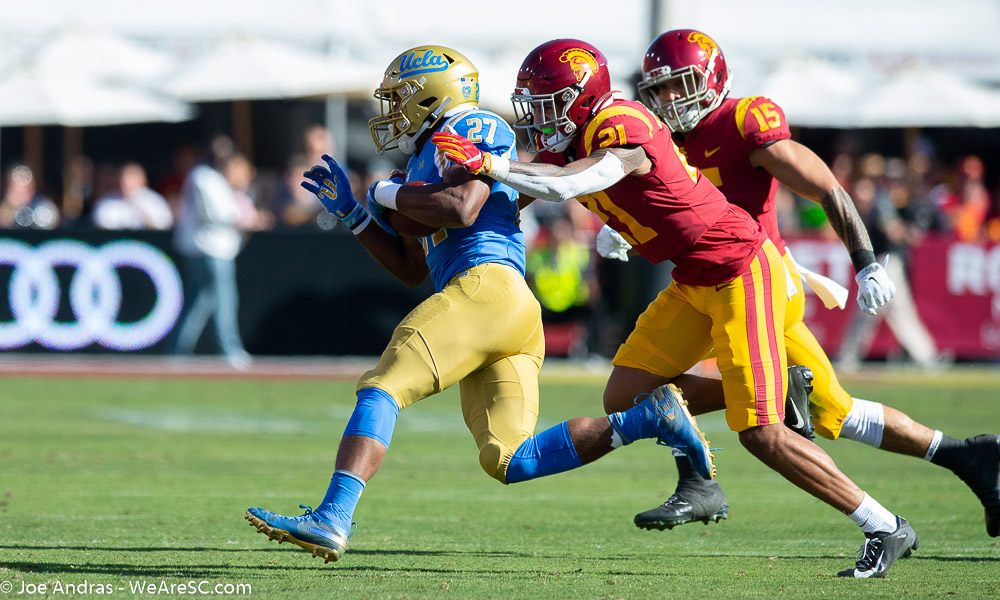 Defensive back is one of the units in the running for the position group hurt most by a lack of spring ball. Not only was the group going to be working on the installation of a new defensive scheme, it also needed to iron out on-field communication between the cornerbacks and safeties, and a number of young players would have received extended reps during their first or second spring ball sessions.

Most importantly, the lack of spring ball takes away the players’ opportunity to spend time on the field with new coaches, in safeties coach Craig Naivar and cornerbacks coach Donte Williams. There is always a period of adjustment as players fully grasp what is being asked of them and exactly how each drill needs to be performed. Pushing that back later in the year means there could be less time with players going full speed with 100% confidence in what they’re doing.

But where this group is hurt the most right now is in not being able to experience the new defensive scheme in a live environment. The new defensive coaches have said these scheme is easy to implement and run with a veteran group, but it’s also proven to be one where uneven secondary play can be disastrous.

The safety position was likely going to be without Talanoa Hufanga for all or most of spring. And while it’s never a great thing to have a positional leader off the field, this would have given other players an opportunity to step into a leadership role.

Chase Williams was filling the void left by Hufanga’s absence, and it would have been interesting to see if he would have been left there all spring, or continued to be worked in with the nickel backs as well, as he was last season.

Without Hufanga on the field, fellow starting safety Isaiah Pola-Mao would have been looked to as a leader at the position. He was impressive last spring in taking on the role of a vocal leader and it would have been interesting to see where he went with that role again.

Spring also would have provided another extended look at Briton Allen. Working at cornerback last spring, Allen took advantage of the fact that USC was down in numbers at the position overall, and was also missing several players due to injury, to take as many reps as just about any player on the team. That helped him get ready for a true freshman season where he saw action in 10 games. With the safety position similarly depleted this spring, he likely would have gotten in a similarly high number of reps. And the same goes for Kaulana Makaula, who showed some flashes last fall and was impressive in the first day of spring.

Naivar said there are a lot of asks of the safeties in this defense, as you are just as likely to be stuffing a run at the line of scrimmage as you are to be 30 yards downfield defending a deep post. Getting the safeties some significant on-field experience would obviously have been beneficial.

At cornerback, the Trojans would have been dealing without Isaac Taylor-Stuart, who is recovering from surgery following a knee injury suffered in the Holiday Bowl. Cornerbacks coach Donte Williams would have been able to take an extended look at Olaijah Griffin and Chris Steele – who would have been competing in his first USC spring ball after spending last spring at Florida – and more importantly, second-year players Jayden Williams, Adonis Otey and Dorian Hewett would have been thrown in against USC’s terrific group of wide receivers and would have grown exponentially.

This was going to be a massively important spring for Max Williams, as the early enrollee last season had to miss spring ball while recovering from injury. And after working his way onto the field, he sprained his ankle late in the season and was held to just four games. Williams is someone who could see plenty of time during his redshirt freshman season, so getting him some extended time on the field would have been tremendously helpful this spring.

With Kedon Slovis back and the USC offense likely to be humming in seven-on-seven and one-on-one situations, these defensive backs would have been challenged significantly this spring. And between the total number of reps and learning under two new voices in the coaching room, there would likely have been some real growth at a position looking to improve on its takeaway numbers and overall production from last season.