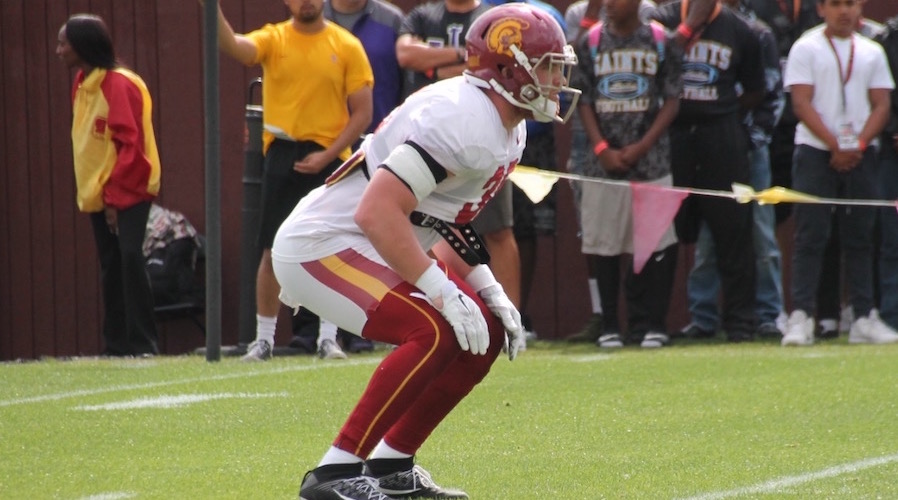 Here’s what we’ve learned after Week 4 of USC football spring drills. The Trojans will wrap-up spring on Saturday at noon in the Coliseum:

One of the better position battles this spring has taken place at nose tackle between senior Josh Fatu and early enrollee freshman Marlon Tuipulotu.

Fatu began spring as the starter and it made sense to have him that role considering he had extensive playing time last year with 21 tackles and one start. Josh offers a thick, run-stuffing option in the middle of the line and that’s certainly a recipe that worked well for the Trojans in 2016 with Stevie Tu’ikolovatu.

As spring went along, however, we also saw the emergence of Tuipulotu, a highly-ranked player who was one of the keys to the 2017 recruiting class after he flipped from Washington. It’s always a bit risky to pin too many hopes on a freshman along the line so the expectations were somewhat muted for Marlon as we waited to see how he would make the adjustment. It took one week for Clay Helton to move Marlon to the 1’s in order to take a look at how he would perform with the starters, and there’s no question that he held his own with his sheer power. There are little nuances still for Marlon to learn but what we’ve seen so far indicates that the Trojans have a real gem here.

The coaches have been alternating Fatu and Tuipulotu with the 1’s during the last week (we even saw one line-up with Fatu at DT and Marlon at nose) and there’s no real reason to change anything with that rotation as we move toward fall camp, where there will also be the addition of another veteran option in Kenny Bigelow (coming off knee surgery). That’s the potential for a very solid three-deep at a critical spot.

There is good talent surrounding the nose as well. Rasheem Green appears to have taken his game to another level with his impressive physique, and Christian Rector has impressed behind him. And I think Uchenna Nwosu at OLB can make a case for being the most consistent defensive player in spring.

If there is a concern on defense it’s probably with the lack of depth at the inside linebacker spot. There are enough bodies at the moment but things are definitely a little thin. Cameron Smith, of course, is set at one spot as he has moved to the Mike position in order to call defensive signals, which Michael Hutchings did last year. Next to him has been John Houston, who brings a lot of athleticism if not a ton of bulk, while Jordan Iosefa is a more physical option and he has been lining up as the reserve to Smith.

The Trojans had a loss earlier in the spring when Tayler Katoa went down to a knee injury as he was lining up behind Houston, and we’ve seen walk-on Grant Moore and Olajuwon Tucker both taking reps in his place. I think Moore has shown a lot in his opportunity for an extended look.

It’s also a reality that the situation along the offensive line is going to remain unsettled until midway through fall camp.

The news came out last week that Viane Talamaivao would be out until fall with bicep surgery, so he joins Toa Lobendahn (knee) and Nico Falah (back) as projected starters who are not available on a full-time basis. There are also a pair of freshmen (Nate Smith and Andrew Vorhees) who are not available due to injury and they would have benefited from taking the extra reps.

Here’s what we do know. Chuma Edoga is more than likely set at LT, and Viane will be the right guard upon his return. Toa will probably be at center or left guard, while Nico brought up the thought of playing right tackle if he is not at center. In the meantime, Roy Hemsley and Chris Brown continue to get looks at both LG and RT, with the thought that there is going to be one open spot between the two of them.

Helton said this week that he will wait until the team is two weeks into fall camp before making a decision on the starting five.

Sam Darnold is the unquestioned leader of the team and every now and then we see a play that is a reminder of why he is so good. Two weeks ago it was a sidearm throw to Cary Angeline that Helton said reminded him of Brett Favre, and this past Saturday it was a simple 30 yard throw to Jalen Greene in the corner of the end zone. The pass was incomplete after PI from Ykili Ross but the play happened right in front of where the media was stationed and it was clear that the ball was perfectly placed for the catch. The reason I bring it up is because of the touch that Sam shows that I think is one of the more underappreciated parts of his game (see Kirk Herbstreit comments on TD at end of Rose Bowl) and this throw could not have been any better.