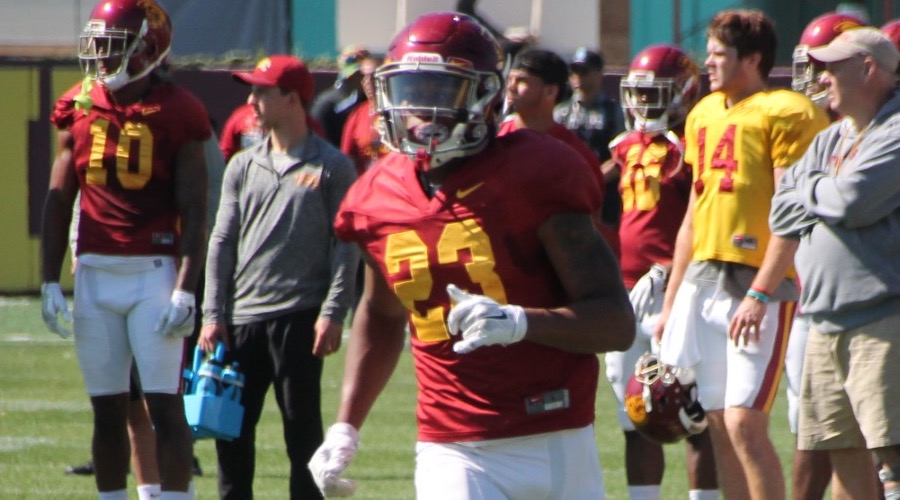 One of the biggest position groups that needed to be reloaded was wide receiver, and Clay Helton even went as far as to say last week that the offense will go as far as the young receivers go who are replacing JuJu, Darreus, etc. I understand the point Helton is trying to make (although I would still say the offense will go as far as Sam Darnold goes) but there will need to be good production from the young receivers when their opportunities are there in order for the offense to really thrive.

Based on the first three weeks of spring you have to like what you see and the good news is that it’s not just one of the young receivers who is making plays, they are taking turns showing up and they are doing it a lot.

I would put Tyler Vaughns at the top of my list so far based upon the number of impressive catches he has made. Tyler came in with a reputation for coming down with the ball in contested situations and he’s certainly doing that now, he also had an impressive diving touchdown catch in the practice on Saturday.

There has probably been the most chatter about Velus Jones (photo above) and it’s deserved. I would definitely call it a pleasant surprise to have Velus make so many explosive plays, we knew he had speed but it’s not something that was even on display much last fall on the service team, at least not at the level it is now. It wouldn’t be a surprise if he ends up being one of the return men on special teams either, he’s made a real impact so far.

You also have Michael Pittman, the one freshman who got playing time last year and he’s been solid. Michael offers a physical presence and I would project him as one of the starting receivers on the outside based on what we’ve seen so far. He had a beautiful TD catch from Darnold last Thursday. We haven’t seen as much from Josh Imatorbhebhe as he was slowed by a sickness early in spring. Josh has been able to get out there a few times, and got praise from Helton for what he did in the first scrimmage.

The way it’s shaping up right now you would have a depth chart that had Pittman, Jalen Greene, Vaughns and Imatorbhebhe on the outside, with Deontay Burnett leading the way in the slot along with Velus, Steven Mitchell, Trevon Sidney (sitting out spring after hip surgery) and Keyshawn Young (we haven’t seen enough from Young to know if he will stay on offense). Not surprisingly, Burnett has been one of the best players on the field and Helton said after practice on Saturday that he was an example of what a Trojan should be, a “shut up and work” kind of guy.

As has been well documented, the Trojan placekicker job is most likely going to be open for grabs with the Matt Boermeester situation up in the air and that has meant a huge opportunity this spring for Michael Brown, who redshirted last year after battling an early quad injury.

Things didn’t start off great for Brown, who struggled in his first major audition on the 2nd day of practice, and the news came out that night that the Trojans would be adding another kicker (Chase McGrath) in the fall. Brown has rebounded nicely, however, and has been more consistent as spring has gone along. He also got the confidence boost of making a 30-yard kick on Saturday after Helton had promised to end practice early with a successful kick.

Early enrollee freshman linebacker Tayler Katoa suffered an ACL injury last week and will undergo surgery that will keep him sidelined for the 2017 season. Katoa had been working as the #2 will linebacker behind John Houston.

Katoa sent out a message on social media responding to the news:

There was a bit of shuffling in the starting line-up on the offensive line as the coaches look to find the best starting five players. The switch involved Roy Hemsley going from RT to LG, and Chris Brown going from LG to RT. Helton said the move was planned, and it makes sense to see the two guys in both spots because one of them will likely end up being a starter. One of the spots will probably be filled by either Toa Lobendahn or Nico Falah (depending on which of the two ends up at center) and spring is the time to look at Hemsley and Brown in both spots.

One player who has impressed lately is Andrew Vorhees. The early entry freshman has seen time at RT and even took some reps with the 1’s at RG this week when Viane Talamaivao was out. Vorhees is physically solid for a first year guy and he’s very aggressive.

Last week marked the first on-field action for Kenny Bigelow in a year since his knee surgery, which coincidentally took place on his birthday (March 31st). It was limited action, and we probably won’t see Kenny do much until the fall, but it was still good to see the big man out there.

One of the things I’ve been most impressed about with Kenny in his attitude and leadership as a veteran player with his injury. It’s been a tough road in his SC career for a former 5-star recruit who has gone through 2 knee rehabs and Kenny has not only preserved but he’s become a steady mature presence for the defensive line.

It will be real interesting to see what the interior line depth chart looks like in the fall. You could have Bigelow back in the rotation at nose, along with a senior in Josh Fatu and the early enrollee Marlon Tuipulotu, who has been one of the bright spots of spring. You have Rasheem Green at one tackle spot, along with the improving Christian Rector, Malik Dorton, Liam Jimmons and Jacob Daniel. Not to mention the possibility of a Jay Tufele or Brandon Pili getting in the mix right away.