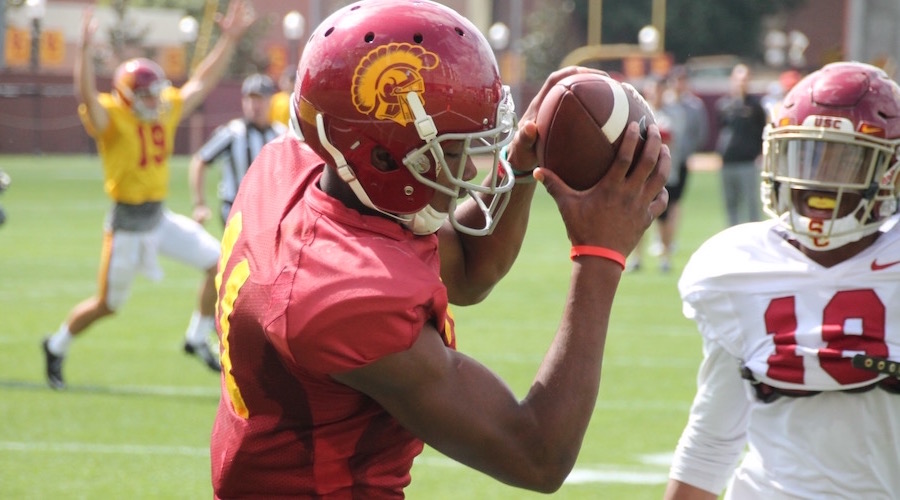 One of the things that is being made clear through the first two weeks of USC spring ball is that the defense is playing fast and physical. It shouldn’t be much of a surprise considering the defense is entering the second year under defensive coordinator Clancy Pendergast, so there figures to be an increased familiarity between players and coaches, especially with eight defensive starters returning.

On the defensive line the player who has jumped out so far is Uchenna Nwosu, who got things started in the scrimmage on Saturday with an early interception and a big hit on Ronald Jones along the sideline. Rasheem Green also looks like a veteran out there. We haven’t seen much of Porter Gustin as he rehabs from injury so that has meant both Oluwole Betiku and Connor Murphy with extended reps. One big move we saw over the weekend during the scrimmage was the insertion of Marlon Tuipulotu into the starting line-up at nose guard. It remains to be seen if this will stick but there’s no question Marlon showed well at the point of attack in his initial scrimmage, he brings a real physicality for an early enrollee freshman.

Clay Helton has made a point to praise Cameron Smith for moving over to the inside linebacker spot occupied last year by Michael Hutchings, which will allow Smith to get the defense lined up each play. Most Trojan fans look at Smith as the centerpiece of the defense anyways so the move makes sense, and Cam looks solid in the middle. John Houston is currently lined up next to him with the 1’s, with the combo of Jordan Iosefa and Tayler Katoa with the 2’s. Houston, Iosefa and Katoa offer good pursuit speed, more than we’ve seen from the position in recent years.

I really like what I see from the secondary. It’s hard to imagine losing the Thorpe Award winner and actually being better as a group but I think that will be case with so many players coming back with experience. Biggie Marshall led the way on Saturday with his physical battles with Michael Pittman, there was a nice pass break-up, a pass interference, and Pittman made one impressive grab in tight coverage. It’s always fun to watch the top CB and top WR match up with each other every day and those two could be the next duo in line. Chris Hawkins is clearly the leader calling out assignments and he also put a huge hit on Velus Jones after a pass down the middle, although Jones did hold on to the ball. Marvell Tell, Ykili Ross and Ajene Harris all had moments as well. And of course, there was Jamel Cook with another pick and a jarring hit, Helton said Cook plays with a “heavy head” and we’ll agree with that. If Cook continues to play like this I don’t know how you keep him off the field.

The scrimmage offered a chance to see some of the offensive skill players who redshirted last season and there were some nice performances. Velus Jones continues to showcase his speed, and you hear the excitement in Helton’s voice when talking about the explosiveness that Jones is showing. We’re seeing Jones not only on offense but in special teams return work as well. Vavae Malepeai has been another pleasant development as he got a lot of reps with Aca’Cedric Ware sitting out the last week. Tyler Vaughns had a pair of acrobatic catches, and Cary Angeline made a play as well. And Matt Fink continues to be solid including a TD pass to Vaughns.

I’m encouraged right now by what we’re seeing from the offensive line, and it starts at the two tackle spots. Chuma Edoga is looking comfortable at left tackle and that’s obviously a big key to having things get settled. Edoga has the talent, and so far he’s showing the steadiness as well. On the other side, so far so good with Roy Hemsley. The coaches are allowing Roy a solo audition with the 1’s at RT and that tells me they want him to hold the job. We haven’t seen a lot of Nico Falah so Cole Smith has been with the 1’s at center, and Frank Martin looks more natural than I thought he would after a recent switch to center.