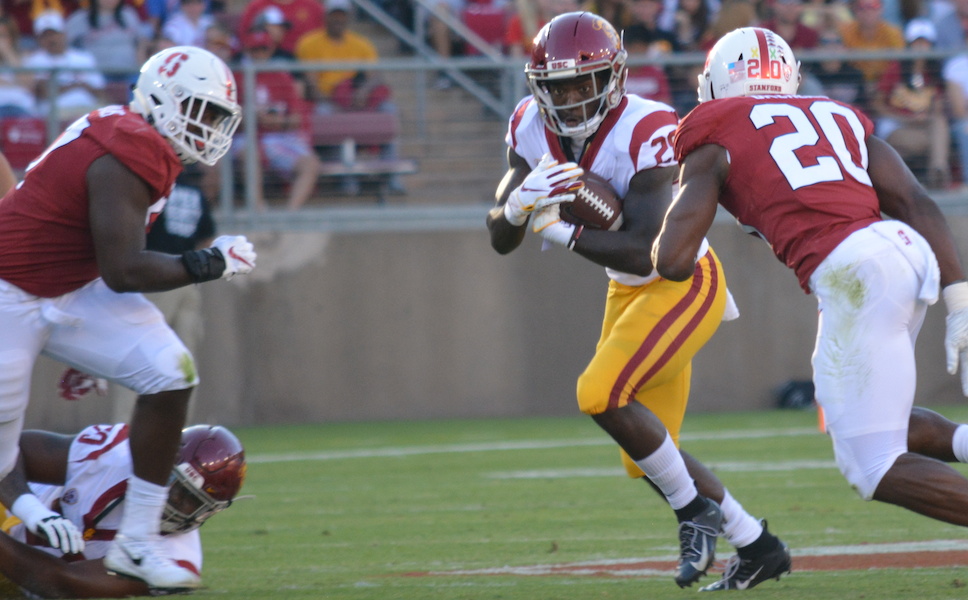 USC loses 17-3 in a game that felt different with the way the Trojans lost. There have been some big losses recently to teams like Alabama, Ohio state and ND, this wasn’t one of those but it wasn’t far off because of the way the Trojans just couldn’t put much together against a good but not great Stanford team.

There has been a lot of focus and frustration with play calling and certain decisions. For instance, opening drive. 3 straight runs nets a first down. Then we go to three straight passes and a punt.

We see JT Daniels leave and Matt Fink comes in, he leads a 13-play drive where 11 plays were runs (53 yard FG attempt missed). Drive has 4 first downs for 44 yards and took 5:39 off the clock. I thought it was a good run-based drive that caught Stanford off guard. JT came back in and 11 of next 17 plays were passes. Was it trying to get Pittman and Vaughns in rhythm with JT?

The decision on 4th and 2 at end of first half. Do you punt? I do. Your offense hadn’t done much, Stanford offense hadn’t done much. Only down 7-0, punt, pin them deep and get into the locker room to adjust. Why risk not making it and giving them great field position and enough time to do something with it? And what did you think of play call?

Stanford marched down. 4 straight completions and a touchdown to make it 14-0. Ronnie Lott made a comment about how our secondary did not make them pay with a big hit if they do make those kind of catches (is that a connection to lack of tackling in practice?).

To prove the point about going into the locker room to readjust, we come out in 2nd half and get two drives deep into Stanford territory. First one was due to biggest play of the day, a 45-yard completion to Pittman at 14. We kick FG, another red zone opportunity where we can’t get ball into end zone. Next drive we get 4 first downs on run plays to the 36, but missed 3rd down throw to Petite.

* How did JT handle first road test? Did we do enough to help take pressure off him (defense no turnovers)? Don’t blame him for picks at the end, he was chucking it up there at that point.
* Should Trojans have been able to take advantage more of back-ups at safety spot for Stanford? What did they do to slow Amon-Ra and/or Velus Jones?
* We saw Stanford take advantage of WR/TE match-ups in red zone, why are we continually struggling in that area? To be fair, no Daniel Imatorbhebhe or Josh Falo.

I’m generally pleased with what the defense did. If you would have offered 17 points and 342 yardage I would have taken that. Still too many big plays in key spots (Love long run to flip the field, 3rd and 23 conversion and drive at end of first half).

It was a bad omen at the opening drive when they got a big run by getting outside Gustin and Tell, two veteran captains. 8 play, 83 yard drive to open the game with a score.

Overall the defense basically held Love (under 4 yard average outside of big run) by controlling interior part of LOS. Boy they are patient running the ball, have to admire it. No sacks on Costello, we got close but never got him.

The Stanford TE’s and WR’s made the difference in the red zone. Ronnie Lott comment, we didn’t make them pay. Darrell Rideaux said on the podcast there is no ability to grow 3-4 inches at half so need to get more physical.

Biggie Marshall – was this his best game as a Trojan? 6 tackles, all solo, including back-to-back when they were pinned in their end. Held Whiteside to 4-62.

We’re down 3 safeties (Bubba, Ykili and now Isaiah Pola-Mao). We will see C.J. Pollard and Talanoa Hufanga. Both had a big tackle in the game, C.J. also had a big miss. Chase Williams will also move from corner.

Now comes Texas and a huge game for this team, program and coaches. Clay Helton said the Stanford game came down to the fact that the Cardinal finished two drives with touchdowns and the Trojans did not. It felt like a little more than that but a bounceback performance on the road against Texas would go a long way toward proving him right, at a time when plenty of USC fans think the offensive issues run deeper. Texas isn’t a world beater right now, it will be a great environment for college football between two traditional college bluebloods but it’s certainly a game that offers the Trojans a chance to come away with a timely victory if they can get some things straightened out.