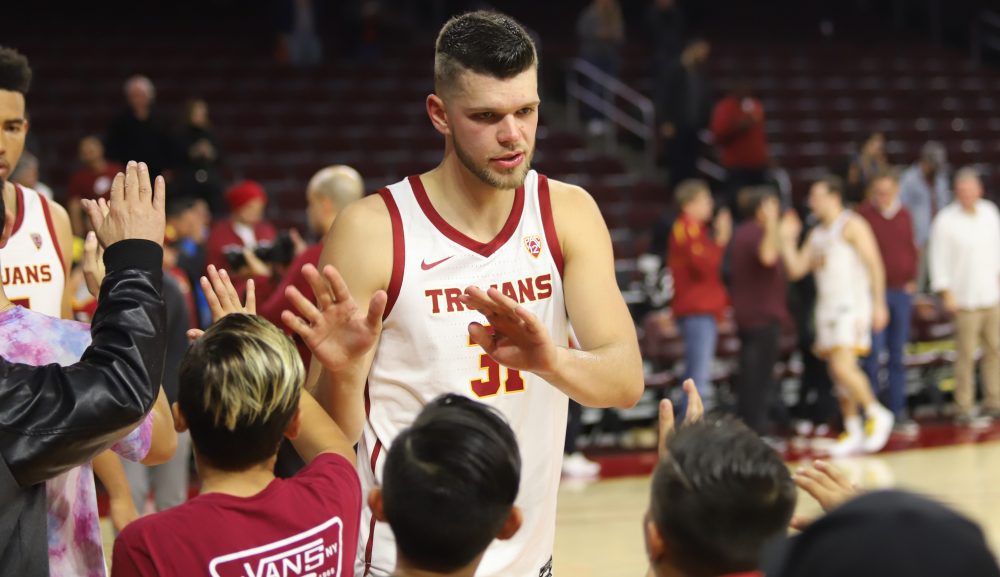 Senior Nick Rakocevic had a career game in leading Troy to an 84-66 win over South Dakota State Tuesday night. On a night when freshmen bigs Onyeka Okongwu and Isaiah Mobley had off games, Rakocevic carried the team early, with 11 points and 9 rebounds in the first 11 minutes. He finished with 27 points, 16 boards, 5 steals and 2 assists.

Big O had early foul trouble for the second straight game, and played only 10 minutes in the first half. The Trojans tried to take advantage of their size and get the ball inside with mixed success. Nick and Big O were often double teamed inside, but both did a good job of beating the defense with quick moves or passes. Big O has an incredibly quick spin move and can go in either direction with either hand. He finished with 12 points and 8 rebounds.

Even with the size advantage, SC only outscored the Jackrabbits 32-26 in the paint. The Trojans won the game by outscoring SD State by 22 off turnovers.

Now it is on to Reno for a game against Nevada on Saturday night.

The Trojans Can Win Without a Big Game From Big O

A lot of fans have wondered how the team would fare if Big O did not have a monster game. For one night at least, the question was answered. Nick was tremendous.

Before the game, Andy stressed how well the defense has played. In the first four games, including the two exhibitions, Andy said that the Trojans have been holding teams to 36% from the field and 55 points per game. The defense was good again against the Jackrabbits. They shot 38% from the field and under 26% from three. After the game, Andy credited increased defensive intensity over the last six minutes for the winning margin.

The Trojans Have Trouble Starting Games and Putting Teams Away

Another slow start and a seven point lead at the half. With 4:20 left in the game, the lead was down to 6. The increased defensive pressure led to an 18 point win, but this game was not one sided. The Trojans are yet to play a good first half.

Isaiah did not have a big impact; He had 4 points and 6 rebounds. When the three bigs are in the game together, the 6’10” Isaiah plays small forward and is often on the perimeter.  Although this may be his natural position, he is still getting comfortable at the 3, and is not 100% recovered from his broken foot from this summer.

Before the game, he spoke about his support and passion for basketball and his goal to increase attendance and gain a better home court advantage. During the game, Mike moved around the arena engaging with students and fans. We’ve heard the same thing for years from ADs and coaches, but I think he may get it done. His passion and enthusiasm is tremendous.

At tip off, there were less than 50 students in the student section and about 1000 fans in the arena. More people filed in during the early part of the game, but the final crowd was small.

In the post game press conference, Jonah and Nick discussed how they had been friends since they were 16. Jonah signed his letter of intent in November, and he worked on Nick to also signed with SC. Nick did eventually sign the next Spring. In this game they each scored their 1000th point just minutes apart, and they said that doing it in the same game made it more special.

The teamed worked hard over the last several practices on taking care of the ball. They had 37 turnovers in the first two games, but reduced their TOs to 11 against the Jackrabbits. Last year they averaged 11 a game, and were in the top 20 nationally in assist to turnover ratio.

It certainly seems that Max is gaining confidence as he continues to play. Against SD State, he made 3 quick threes in the first half, when scoring from someone other than Nick was needed. Andy said after the game that Max struggled on some defensive possessions, which limited his floor time. On the other hand, grad transfer guard Daniel Utomi seems to be pressing. At Akron, he was a key player and played big minutes. On this team there are several players fighting for playing time, and I think Daniel is pressing. He didn’t score and had 3 rebounds in the game. We all know he can shoot, with 5 threes against Villanova. He needs to settle back in.

Jonah Mathews Did Not Start.

Andy benched Jonah again for missed classes. He played well when he got in, especially in the second half, scoring 14 including 3-7 from beyond the three point line.

Four Pac 12 teams are in the top 25, but S.C. did not get a vote. I was curious whether the voters would give the Trojans any credit for the exhibition win over 10th ranked Villanova. The answer is clearly no, though anyone who watched the game could see that both teams played the game as if it was a regular season game and played to win.

Nick and Andy Have A Very Good Relationship

Nick said after the game that Andy is his biggest fan when he plays within the system and that he found out that Andy was not a fan of his step back three with 3 minutes left in the Portland game. “Lesson Learned”, Nick said.

About two hours before the game, I walked past Andy’s car when he was waiting for a security person to open the gate to allow him to park under Galen. He rolled down his window and talked for a couple of minutes. I suggested that perhaps his inability to get into the parking garage was a message from the new AD. I think he thought it was funny.

The Trojans are 3-0 after a season opening home stand, winning three games they should have won. But I am left wondering if the Trojans are ready yet for all the preseason expectations. They have not yet played a full game, or a good first half. Things get much tougher Saturday night against Nevada on the road. Andy expects a big crowd and a tough atmosphere, and Nevada has won over 90% of its home games over the last few years. He said that the Wolfpack have three very good high scoring guards. I still think the Trojans will win, but it will be a tough game and good test.