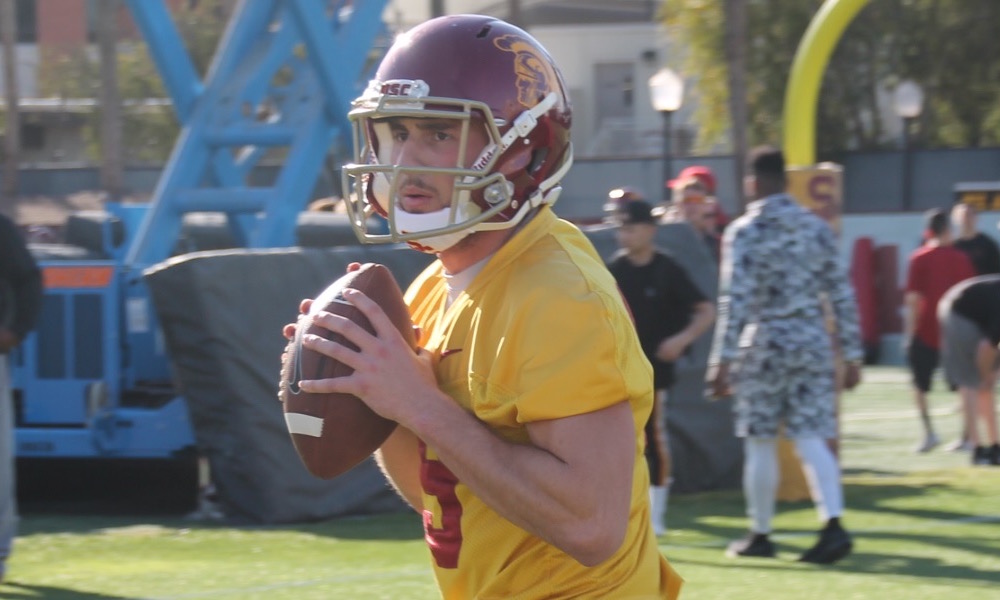 For those coming out to the final USC spring practice on Saturday, or who plan on watching the Pac-12 Network broadcast at noon, here are a few thoughts on what you’re going to see:

* Improved depth, especially on defense, which is one of the reasons why the defense was the dominant unit during spring led by seniors Cameron Smith, Porter Gustin, Iman Marshall and Marvell Tell. Cameron Smith has been his usual steady self, the rock of the defense. Gustin is the one who has really been a pleasant surprise to me with his leadership, a more vocal player in his final spring than we’ve seen from him before. Iman Marshall has raised his play as much as anybody and he looks very comfortable on the field. Marvell Tell brings the physicality from the safety spot.

*New names: We’ve seen Aca’Cedric Ware before but not in this kind of lead role. He was out there every day running hard, and many times he was the only available scholarship tailback. A message was definitely sent to the coaches that Ced is ready if needed. Velus Jones got hot toward the end of spring with the ability to get deep for multiple explosive plays in the scrimmage last week, including a pair of touchdowns. Kana’I Mauga and Talanoa Hufanga are a pair of early enrollee freshmen who have really stood out on defense. Mauga will line up with the 1’s on Saturday at outside linebacker with Jordan Iosefa out of action due to injury, and he has impressed with his quick feet. Hufanga has such good football instincts at safety.

* Injured or unavailable: Stephan Carr is probably the biggest absence as he is rehabbing from back surgery but he’s not the only loss for the offense who will also be without Toa Lobendahn and Daniel Imatorbhebhe, among others. The defense will be without Marlon Tuipulotu, Jordan Iosefa, Greg Johnson, Tyler Katoa, Isaiah Pola-Mao and Jay Godfrey. Jackie Jones is unavailable due to suspension.

* QB battle to be continued: This will be the final opportunity for Matt Fink and Jack Sears to have the stage to themselves this spring. Neither one was able to take a step forward as the leading candidate for the starting job and Clay Helton had already announced that there would be no starter named at the end of spring, which meant the competition will continue into fall camp when J.T. Daniels arrives. Daniels was a frequent visitor to spring ball and the fact that neither Fink or Sears took a step forward has brought about a lot of speculation about JT eventually winning the job.

We talked to former USC quarterback John Mazur to get his thoughts on Fink and Sears based on what he saw at a recent Trojan spring ball session.

“The first thing I would say is nothing is ever really clear in spring ball. There are a lot of guys out on offense (see list above) and you don’t have the new guys arriving in the fall either. And while Fink and Sears are out there and there are some struggles, JT Daniels hasn’t missed a pass yet. JT has the advantage of people talking about him but he hasn’t had to show his cards yet. All we can do in spring is get a snapshot of what’s happening now, and know that things can change in the fall. When I watch the two quarterbacks now, Fink seems less volatile, more likely to be able to handle the load. I know what my eyes have seen from him with his running ability, he can cut up-field vertically with a burst, not just a quarterback who is running. With Sears there is a higher volatility, such as last week in the scrimmage when he didn’t see the nickel corner and threw the pick-6. He doesn’t see that yet. It’s nothing against Sears, that could change and it could happen overnight. There will be a lot of factors at play in fall camp and a lot of thought put into it by Clay Helton. He had a similar situation two years ago with Browne/Darnold, and in my eyes that camp I thought Darnold was making all the plays but I didn’t know everything that was going into their thinking. Does he need to pick one guy right away this year? Does he rotate guys early to see who is playing the best?”