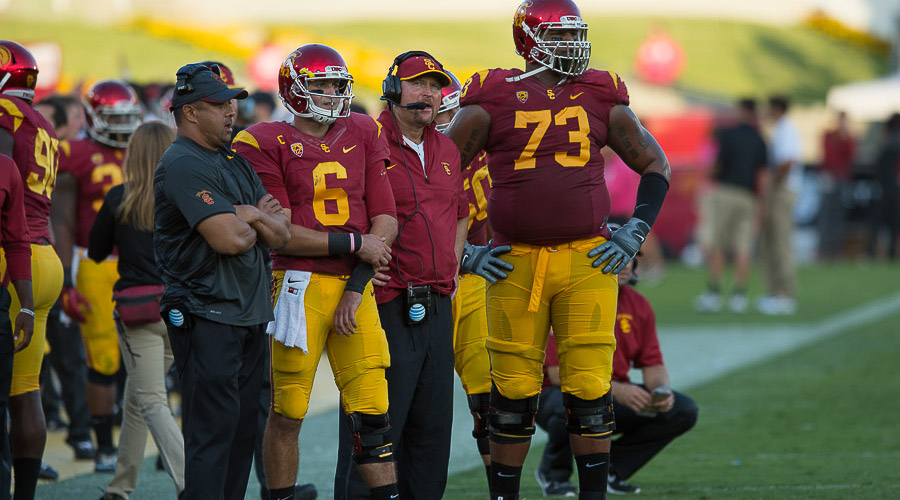 How did high school football players get so big?

Rich Neuheisel commented recently about how Pac 12 players look smaller than players from other conferences.  I don’t what the statistics say – it should be easy to do an analysis, being that every program lists the heights and weights of their players – but my eyeballs agree with Rick.

But more noticeable to me is just how big high school players have gotten compared to years past.  In the late 80’s, I had a teammate who was 6’5” and 240 pounds.  He accepted a scholarship to Notre Dame where he played on some of Lou Holtz’s great Irish teams and then had a cup of coffee with the Bears.  He was huge, an absolute dominant presence on the field every week.

Today, he’d be a project, too small to be a blue-chip recruit.

What has happened?  I’ve seen a number of articles discussing this phenomenon, but I haven’t seen anybody try to explain it.  Evolutionary changes don’t happen in a generation.  The United States wasn’t exactly impoverished 30 or 40 years ago; we ate then, too.  And we lifted weights.  And we tried to get bigger.  But we didn’t have dozens of athletic 330-pound tackles or 250-pound linebackers that could run 4.7 in the 40.  Can this really be a case of better weight training?  Is it the prevalence of PED’s?  I’m bewildered.

Man, I miss the wheel route with the running back running the out and up.  How many times did that play pay off during the Pete and Norm days?

I don’t know how much freedom Kliff Kingsbury will be given to run the offense, or what changes he might make from this Texas Tech schemes, or how quickly USC’s players will catch on.  But I suspect he’s at least a little intrigued to have so many elite prospects at his disposal.  Look at the numerical rankings from 247 for the likely skill-position starters on offense next season:

Holy smokes.  Those are ridiculous numbers.  I doubt he ever had such a collection of top-notch recruits at Texas Tech.  (He did, of course, have some pretty remarkable individual talents.)

I can’t wait to see whether they can score in the second half.

So I was watching 4th and 9 the other day because – wait, why should I have to explain that?  Do you need a reason to watch 4th and 9?

There are some things I don’t understand about that play.  I’m curious what wearesc thinks.

So I know that PC, LK, and SS told Leinart that if he got a blitz look, he could audible.  Pete discusses it here:

And ND does, in fact, give a blitz look.

So Leinart audibles and changes the pass protection; he actually keeps both Reggie and Dominique Byrd in to block, and for reasons I don’t understand, Byrd looks inside where no help seems to be needed and leaves Reggie one-on-one with a blitzing linebacker on the outside.  That doesn’t seem to be ideal, although Reggie handles his assignment like a champ.

But why was the look ND gave pre-snap a look that made the fade to Jarrett the right choice?  You have Jarrett split to the left side, the short side of the field, with a corner in his face and Tom Zbikowski over the top just outside of the hash.  How does Leinart know that Tom Z won’t stay over the top and play the fade?  There are no other receivers to that side, and I can’t imagine Tom Z is given responsibility to handle Reggie if Reggie runs a short route.  (He’s 12 yards back, and if Tom Z is one-on-one with Reggie with that much space, ND is in trouble.)  If Tom Z stays over the top to help the corner on his side, Leinart’s decision seems terrible – essentially throwing the fade into a man under, 2-deep on that side.  Even without safety help, the fade isn’t exactly high percentage there.  So what is Matty L seeing that I’m not seeing?

I have a nomination to make: Kevin Kelley, the coach at Pulaski Academy in Arkansas, for special teams coordinator.  Most of you have probably heard of him; he’s the guy who almost never punts and virtually always attempts on-side kicks.  He’s heavy into analytics and challenging conventional football wisdom.

I know, you’re saying this is too outside-the-box for major college football.  Maybe.  And I’m not suggesting that USC should adopt Kelley’s approach wholesale.  But we’ve already abandoned traditional, Trojan football for the Air Raid, and I’m not convinced that the current staff is exactly neck-deep in innovative thinking.  He might be a nice addition.

Besides, is Kelley’s approach any more radical than Baxter’s practice of only sending 10 men on the field?  We’re experimenting already, from my perspective.

Trojan Game of the Past

For the second week in a row, the top-ranked Trojans played a horrific first half and found their winning streak at risk, trailing 21-3 at the half to 14th ranked ASU.  Leinart had taken a shot in the first half and didn’t really look like himself for much of the game (though his numbers weren’t terrible).  So in the second half, USC just brutalized ASU on the ground, rushing for almost 300 yards in the second half alone.  LenDale finished with 197 yards rushing on 19 carries with 2 TD’s; Reggie finished with 158 on 17 carries and 2 TD’s as well.  ASU rushed for only 68 yards on 32 carries.  The Trojans kept their winning streak alive by outscoring ASU 35-7 in the second half.

That was old-school Trojan football.  Absolute, physical dominance over a ranked team at their place.