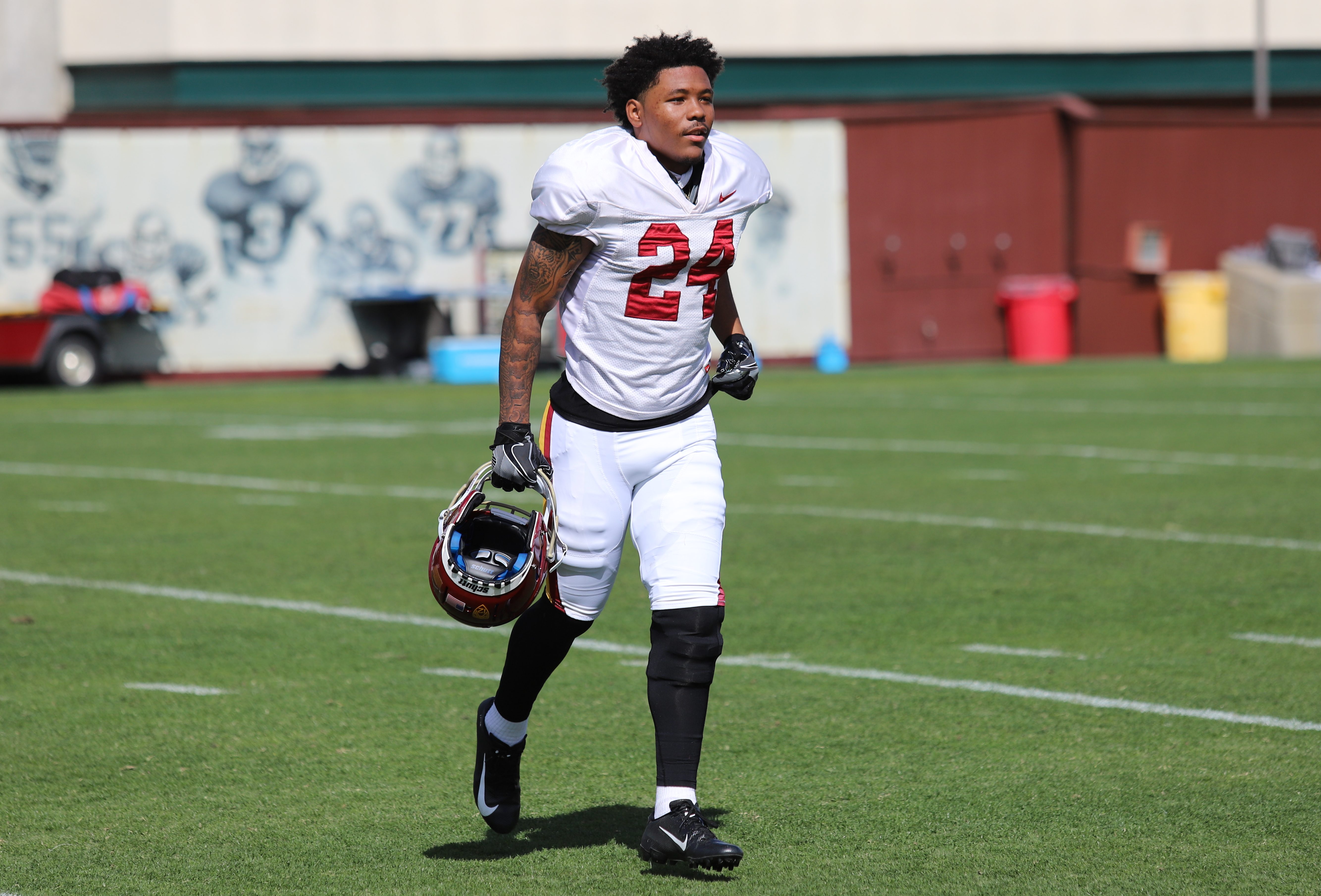 Through five games of the 2019 season, the USC defense has probably been good enough to win all five games, but the Trojans are still a ways away from fielding a dominant unit, capable of leading the Pac-12 in multiple important categories.

Still there are signs of life from the defense, including a stout interior of the defensive line, and improved play from a secondary relying on plenty of guys getting their first shot at extended playing time.

Defensive coordinator Clancy Pendergast said that through the first five games, he’s pleased with the pressure the Trojans are getting on opposing quarterbacks, their third-down performance and their ability to force field goal attempts in the red zone.

Still, Pendergast said the defense needs to do a better job tackling the quarterback. He estimates they’ve left at least 10 sacks on the field as defenders are getting behind the quarterback and allowing him to step up into second-level lanes with access to get up the field. Pendergast also pointed again to the perimeter, where teams are attacking with varying degrees of success, but where most big runs are hitting the Trojans.

“Playing with better eye control int he back seven, seeing those perimeter plays, is probably one of the biggest things I want us to get better at,” Pendergast said. “The fly sweeps, the crack tosses. You put on any NFL film and that’s what everybody is doing in the league right now, so it trickles down to the college game. We just have to play it better on a more consistent basis.”

Pendergast said that entails a combination of everybody in the back seven, whether it’s a cornerback or safety setting the edge, or linebackers taking the correct angles to get to the ballcarrier.

“People will try to get the perimeter and our guys know that now,” Pendergast said.

He said the bye week has allowed them to slow some things down, as they aren’t rushing to prepare for an opponent. Pendergast said the defense is getting some visual clues about what teams are doing against them, allowing them to better understand what might be coming at them if they start to recognize a certain formation in a particular part or side of the field. Pendergast said it’s all about playing with better eyes, and doing a better job of recognition.”

One position group that has stepped up in a big way, considering their lack of experience entering the season, is the defensive backs. The Trojans were tasked with slowing down a potent Washington passing game without starting safety Talanoa Hufanga and starting cornerback Olaijah Griffin, and they performed well. True freshman Chris Steele has become a mainstay at cornerback, and fellow true freshman Max Williams got his first bit of playing time this past weekend, drawing the start at nickelback. Williams came up to force quarterback Jacob Eason to slid in the Washington backfield, and he also forced a fumble at the goal line, which was eventually recovered by the Huskies for a touchdown.

“I thought he did a really good job, and I knew he would have, just by how he practices and carries himself,” defensive backs coach Greg Burns said of Williams. “He’s earned the opportunity. I’m glad he got it and he took advantage of it.”

Head coach Clay Helton praised Williams as well, saying that he believes Greg Johnson is playing good football as the starter at nickel, but Williams coming along could allow them to move Chase Williams back to safety full time.

It’s a defensive backfield that has seen plenty of movement, as cornerbacks Steele, Griffin and Isaac Taylor-Stuart have bounced around on both sides of the field and in and out of the starting lineup as injuries call for it. With three good cornerbacks, Burns said it isn’t a matter of selecting starters and being settled there.

“Even when Steele got his first start, I never told him he was going to start,” Burns said. “I said, ‘You’re going first.'”

Burns said it’s all about competition with the cornerbacks, nickels and safeties.

“They have to,” Burns said. “That’s what this thing is based on. I don’t want you to relax. I want you to understand clearly that you’re just going first…If someone’s outworking you, why should they not get the opportunity?”

Burns is clearly pleased with much of what he’s seen from his defensive backs this season, but he’s admittedly a tough grader, and he sees much more as being possible from them.

“I would say it’s too early to cast a full assessment,” Burns said. “I would say, yes, we’re in an upward swing, so to speak. But in my eyes, [we’re] nowhere close. We still have a lot of things to work on. I’m happy we’re moving upward, but we still have to move a lot further.”

As for those “things” to work on, Burns said: “attention to detail in their coverages, alignments, checks, footwork in the press, our fits.

“It’s a mixture of different things for each individual.”

But overall, Burns stressed tackling and getting off blocks as something that he will stress from the start of spring ball through the final whistle of the season.

“We have to get better at defeating blocks and stop doing one-for-ones and letting somebody else make the play,” Burns said. “Find a way to defeat it and make the play. That’s the part that’s going to make you become special.”

Helton said that quarterback JT Daniels had successful surgery on Tuesday and is already pushing to get ahead of his rehab schedule.

Quarterback Kedon Slovis and safety Talanoa Hufanga were both in shells on Wednesday, but neither is yet cleared for contact.

Defensive end Christian Rector, wide receiver Amon-Ra St. Brown and running back Vavae Malepeai sat out Wednesday practice after missing Tuesday as well. Linebacker Jordan Iosefa is not yet back at practice. Helton suggested that Iosefa could potentially be back to practice at some point before the Notre Dame game.

Linebacker Eli’jah Winston participated in practice, but did not wear pads. He has been out for several weeks with turf toe.

Helton spoke glowingly about Max Williams, saying they’ve always known about his football instincts and comparing him to Ajene Harris and Nickell Robey.

“He’s going to be a special player for us,” Helton said of Williams.

Asked about the penalty issues this season, Helton said they were “really good going into the Utah game.”

He said the Utah and Washington games were closely-officiated games, but the thing he’s addressed with the team is decision making. If there are tightly called games, they have to be better about celebrations and after-play issues that have drawn penalties. But Helton said he is pleased with the lack of fundamental penalties — a lack of holding calls or “handsy” calls — and believes the attention they paid to hand placement and having officials present at camp has helped in that area.