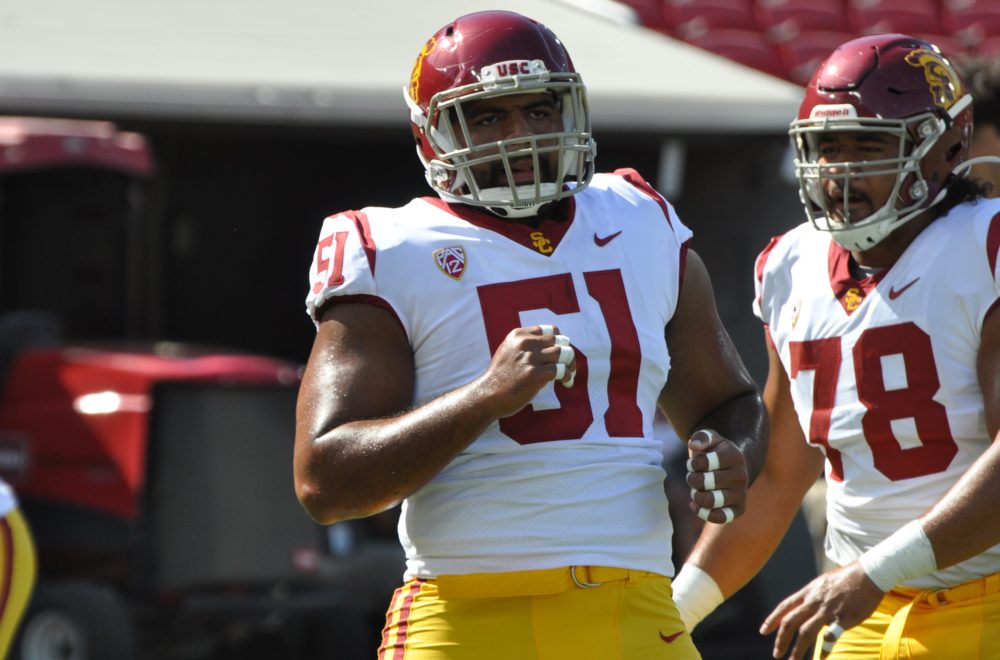 The USC defense will be tested Saturday by a BYU offense playing with some confidence after pulling out a win over Tennessee with 12 points scored in the final minute of regulation and two overtime periods.

But the Trojans defense is carrying some momentum of its own, after shutting out Stanford over the second have of the game this past weekend.

As with virtually every game, this matchup between the Trojan defense and Cougar offense will likely be decided in the trenches, as BYU brings an offensive line with plenty of size and some experience throughout.

“This offensive line is a seasoned group of guys,” USC defensive line coach Chad Kauha’aha’a said of BYU’s front five. “I got to face them last year and they’re not the same group of guys. I think last year was a developmental year for them, and right now they’re playing really well together. They’re big. They’re physical and they’re doing a nice job of getting in peoples’ way because they’re so big. It’s going to be a challenge this week. No. 1, us staying in our pass rush lanes. And then No. 2, is slowing down their run game.”

The run game is paced by 6-foot, 220-pound Ty’Son Williams, a graduate transfer from South Carolina. While Utah kept him largely in check, he got some momentum going against Tennessee and scored the game-winning touchdown. But the USC defense has been very good against opposing tailbacks through two games, save for one long run by Stanford’s Cameron Scarlett.

“They’re playing sound, fundamental football in the run game, which was an area of concern for coach Clancy,” Kauha’aha’a said of his defensive front. “We’ve been addressing it since Day 1 and it’s showing up on film. It’s showing up in games.”

Kauha’aha’a specifically praised nose tackle Marlon Tuipulotu, who has nine tackles through two games from a position that usually requires taking on a double team.

“What’s great about Marlon right now is he’s playing with some violence,” Kauha’aha’a said. “His physicality is pretty dang good right now, where he’s coming off the blocks with violence, and that’s why he’s getting these TFLs. That’s why he’s making these plays from his position.”

And that play has led to increased production from the defensive line as a whole.

“His effort is through the roof right now,” Kauha’aha’a said of Tuipulotu. “He does it in practice every single day and it’s become contagious to the rest of the d-line. These guys are flying around.”

With Christian Rector missing practice while still nursing an ankle injury suffered late in the Stanford game, Connor Murphy and Caleb Tremblay are battling to step into that starting spot if Rector is unable to go on Saturday.

But it’s a defense that looks to have a little life to it after that Stanford performance. Outside linebacker Hunter Echols said that the firepower that quarterback Kedon Slovis and a wide receiver crew of Michael Pittman, Tyler Vaughns, Amon-Ra St. Brown, and the rest of the playmakers on that offense brings to that side of the ball makes things easier on the defense.

“When the offense is doing their thing, when they’re balling like that, it just takes the pressure off us,” Echols said. “We know that if we stop them, the offense is going to go put more points on the board and help build that lead. It makes everything more fun; it makes it more comfortable out there.”

The Trojans were in shells and shorts for Wednesday practice.

Wide receiver Devon Williams was not in attendance, a few hours after entering his name into the NCAA transfer portal.

Christian Rector rode the exercise bike for a bit. With Clay Helton not available to the media today, we will get an injury update following Thursday’s practice.

With Jimmons out, true freshman Jason Rodriguez worked with the second-team offense during the early walkthrough. In that same group, the wide receivers were three true freshmen, with John Jackson III, Drake London, and Munir McClain.

Defensive tackle Jay Tufele is the lone player from Utah on the USC roster. He said he will have plenty of family in attendance although he added that he “ain’t gonna lie,” and that some of his family are BYU fans.