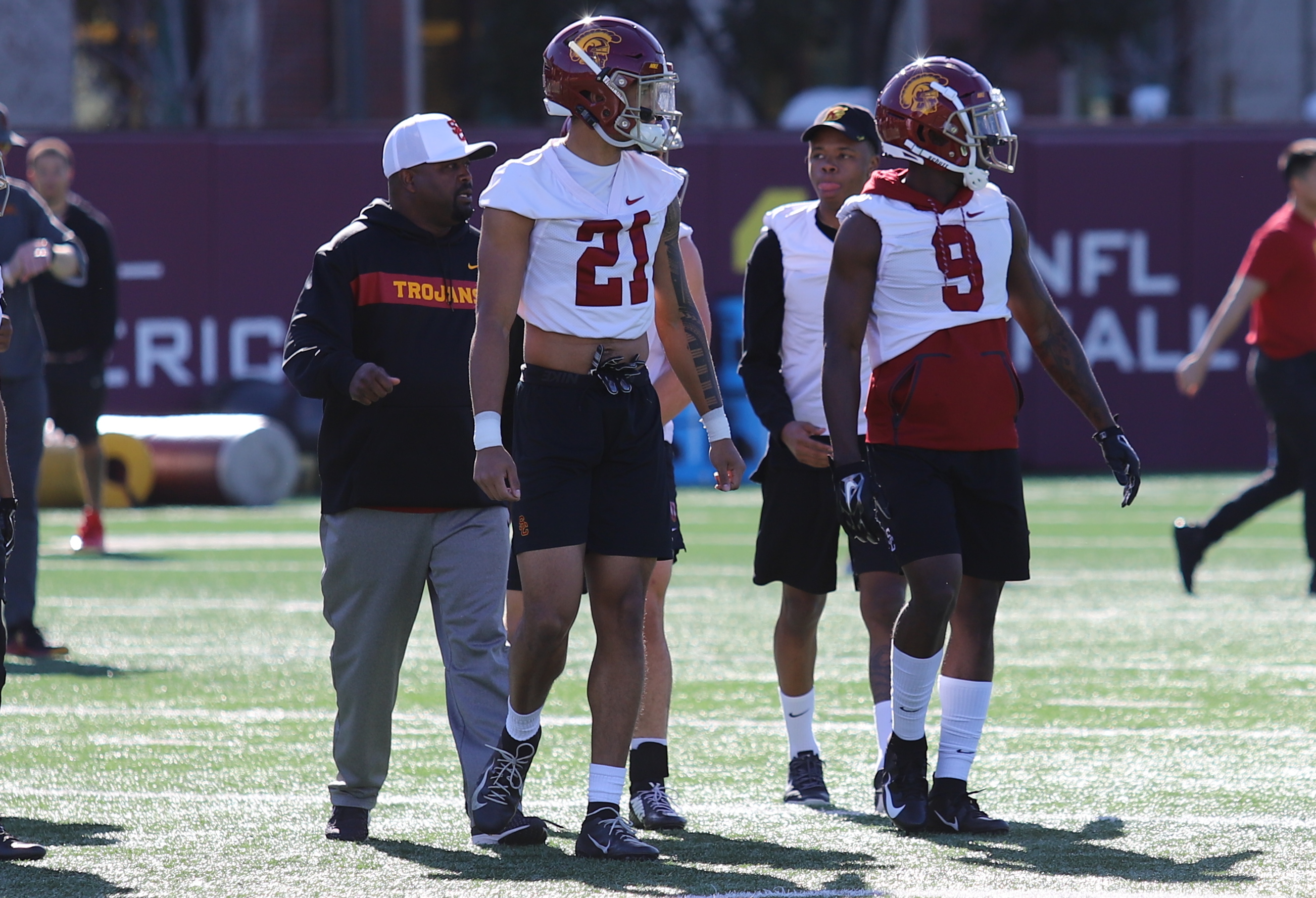 It’s easy to look at just three starters returning for the Fresno State offense and assume that the Bulldogs will be toothless on that side of the ball, especially with a quarterback starting his first game and a group of wide receivers with very little experience. But it’s even easier to look back at last season as a whole, and specifically the season opener, when UNLV ran for 308 yards against the Trojans, setting the tone for what would be a dismal 5-7 season.

This time around, the USC defense is looking to get off to a strong start, and that should start up front with a veteran defensive line hoping to stop the run and make quarterback Jorge Reyna and his 12 career pass attempts beat them through the air. But that was certainly the plan last year as well against the Rebels, a game that senior defensive end Christian Rector said this team is using to prepare for the season opener.

“We definitely look back on that,” Rector said of both the UNLV game last year as well as the 2017 opener, when Western Michigan ran for 263 yards. “[It’s] the same things you see from every team on opening week: missed tackles, guys being out of gaps. We’re looking to fix that and not really having too many of those mistakes early on.”

Rector said the defense’s confidence level is “at an all-time high” at this point and knows that proving it won’t come with words.

“We’ll see,” Rector said. “I’m confident in us, but that doesn’t mean anything until we go out there and you see us play.”

Rector will likely be joined by fellow defensive end Drake Jackson on the defensive line at various times this Saturday, as the Trojans are capable of going to a four-down lineman look with the emergence of the standout true freshman.

“We’ve been able to go into a 4-3 now,” defensive coordinator Clancy Pendergast said following Wednesday’s practice. “In recruiting different types of bodies to play different styles of defense, I feel like we’re at that point now where we can do it.”

Pendergast said there will likely be more rotation among the defensive line than the back seven, noting that he’s “always felt there’s a cohesiveness where the back seven needs to play together.”

Pendergast said he feels a wide receiver can come off the bench to run a route and then go back to the bench, but there’s a need for a defensive back seven to play together for an extended time, getting a feel for each other, the environment, and the speed of the game.

But he added that he is open to playing more players this year.

“I’ve seen our depth,” Pendergast said. “When we go out here and we put the twos out here, it’s a group that I feel comfortable with. I think we’ll be able to keep as fresh as possible, particularly up front.”

As for the secondary, defensive backs coach Greg Burns said he could see five to seven guys playing in a rotation. That likely means Talanoa Hufanga and Isaiah Pola-Mao at safety, with either Greg Johnson or Chase Williams at nickelback, and Olaijah Griffin, Isaac Taylor-Stuart and Chris Steele at cornerback. Safety CJ Pollard is another candidate for playing time. While Johnson and Williams have been working at nickel, Burns said both could play other positions, with Johnson capable of playing corner and Williams moving to safety. He isn’t looking for a set five to leave in for the entire game, and guys could play multiple positions.

“I don’t have a problem with rotating,” Burns said. “There’s no reason why Chase and Greg shouldn’t both be playing. They’re both good.”

One thing Burns will have to deal with heading into Saturday is the inexperience of his defensive backs. None have started a full season and the oldest potential starters are redshirt sophomores.

“I just want to get it started,” Burns said. “Get that first game in, get that first hit. Then all of a sudden it’s like, hey, it’s football. Go play. I’m not necessarily worrying about them. I think they’re going to do a good job.”

Burns said “the newness of it all” was the biggest concern with an inexperienced secondary.

“The biggest thing they have to realize is simplify what you’re doing,” he said. “I would say the one thing I’m going to be honing in on is if, when the game starts, do they change their technique, or are they trusting their training? That’s when I’m going to say okay, I have to reel him back in. Because that’s the reality of it. Do you revert to something random, or do you stick to your training?”

For Pendergast, that training has paid off heading into the season. Multiple defensive coaches have talked about how improving tackling across the board was a priority for this season. Asked where this team is better than the 2018 at a similar juncture, Pendergast pointed there again, listing open field tackling, playing better as a complete unit, and being better situationally as the biggest improvements.

The Trojans were in shorts and shells for Wednesday’s practice.

Redshirt senior Dominic Davis again wore red (offense) on Wednesday after doing so on Tuesday. He had been working at cornerback throughout spring ball and fall camp, but came to USC as a running back.

Kyle Ford did not dress for practice, one day after wearing full pads.

During the early portion of practice we are able to watch, the offensive line featured the usual left side, with Austin Jackson and Alijah Vera-Tucker, Brett Neilon at center, and a right side we’ve seen of late, with Jalen McKenzie at right guard and Drew Richmond at right tackle.