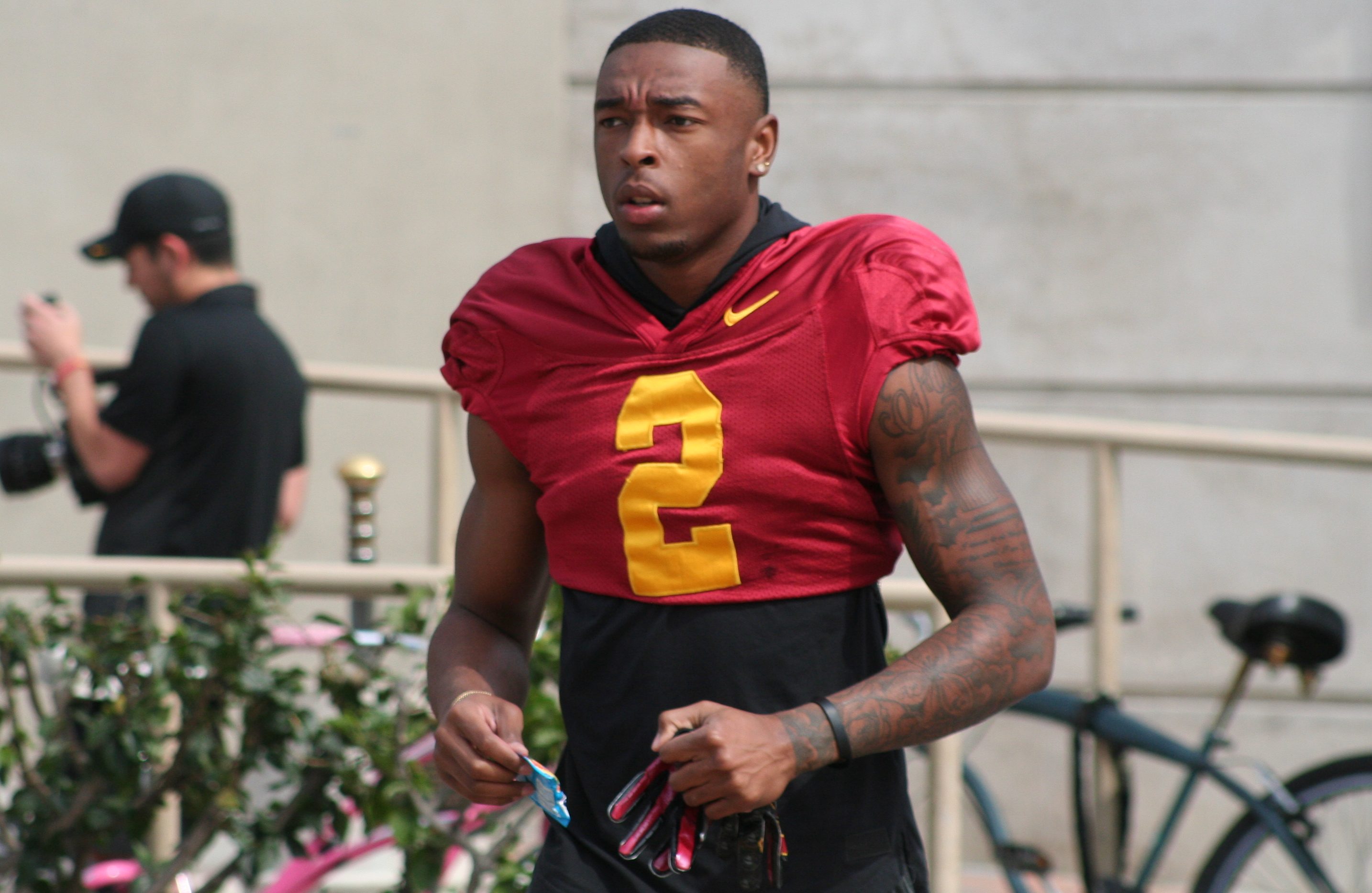 The USC Trojans hit the practice field in shorts and shells on Wednesday afternoon, in what was a bounce-back day for the offense following yesterday’s more disjointed outing.

Defensive tackle Brandon Pili went through individual drills, but did not participate in the team session.

Special teams continues to get plenty of work, and kicker Chase McGrath has returned from his injury rehab in terrific form. He made kicks from 30, 36, 42, and 46 yards today (some of them would have been good from more than 50), and he was slightly wide right from 50.

Michael Brown kicked as well, making a kick from 35, then missing from 45 when the ball bounced off the upright and then the crossbar. He came up a little short from 50.

The defensive backs and wide receivers went at it in a three-on-three drill, with a wide receiver grabbing a screen pass and the other two working to block the three defenders. One of the best offensive reps came on a Devon Williams grab with Velus Jones and Jude Wolfe out blocking.

Josh Falo continues to show his improved blocking, drawing a few praises from his offensive teammates.

Drake Jackson had an eye-opening play as the offensive and defensive linemen were going at each other in a pass rush drill. Matched up against Jason Rodriguez, Jackson got leverage and got Rodriguez off balance, nearly picking him off the ground as he pushed him into the backfield. It wasn’t indicative of Rodriguez’ overall play this fall, as the true freshmen has been solid. But on this occasion, Jackson showed why he’s going to see the field early and often this fall.

Jackson had another nice rep against Drew Richmond, but Richmond came back to stop Christian Rector. Marlon Tuipulotu got around Andrew Vorhees. Alijah Vera-Tucker had a great rep to stop Tuipulotu a little later.

During team drills, JT Daniels came out firing with the first team, hitting completion to Amon-Ra St. Brown and Tyler Vaughns, to go with runs from Stephen Carr (Palaie Gaoteote had a solid wrap-up on one of the carries). Daniels had a noticeable bounce in his step today, 24 hours after what was pretty clearly his worst outing of the fall.

Isaac Taylor-Stuart and Chris Steele went with the first team defense, with Juliano Falaniko starting at outside linebacker in place of Echols. Taylor-Stuart made a nice play to fight through a block and put a hit on Velus Jones.

True freshman running back Kenan Christon got going a bit today, with a couple of nice runs. He was able to showcase his speed to get to the outside, but he did well to keep a couple runs up the middle today, showing a little wiggle and a combination of burst and strength.

Michael Pittman did well to hang onto a pass after it was slightly tipped by John Houston during seven-on-seven. Houston came back a little later and knocked away a pass from Jack Sears. Houston has made several plays in the passing game during recent practices.

Kedon Slovis found an open Jude Wolfe down the middle for a touchdown.

Daniels carved up the second-unit defense, hitting four-straight passes with the final two going for touchdowns to Amon-Ra St. Brown and Devon Williams. His fifth pass was knocked down by Ralen Goforth, who made a terrific diving play on the ball.

During team drills, Jay Tufele got things started by batting down a Slovis attempt, and a Christian Rector stop in the run game had defensive line coach Chad Kauha’aha’a sprinting in to offer high fives to his senior defensive end. Slovis hit Pittman over good coverage from Steele, and Falaniko eventually ended the series by chasing Slovis down for a sack.

Devon Williams continues his up-and-down play this fall, as he started a Matt Fink series with a drop on a ball that should have been caught. Fink went right back to Williams for a catch, then tried to hit him again but CJ Pollard made contact at the same time as the ball and it feel incomplete. Drops continue to be an issue for Williams. But he has so much potential, and if it comes together, he could wind up as the best receiver in the conference at some point in his career.

Daniels led the first-team offense to a touchdown during the final session of the day as he hit Vaughns with a really nicely thrown back shoulder ball. Markese Stepp finished the drive with a short touchdown run, where he carried a defender into the endzone.

Sears scored a touchdown of his own with the second team, finding Jones a couple times before hitting Drake London for a score.

Clay Helton announced there would be an overtime period, where the offense scored twice. Daniels hit Williams with a short touchdown. Steele had an argument that he actually came away with the ball, but the call was made in favor of Williams.

Fink finished the next drive with a pass to Williams, which he went up to grab for the score.