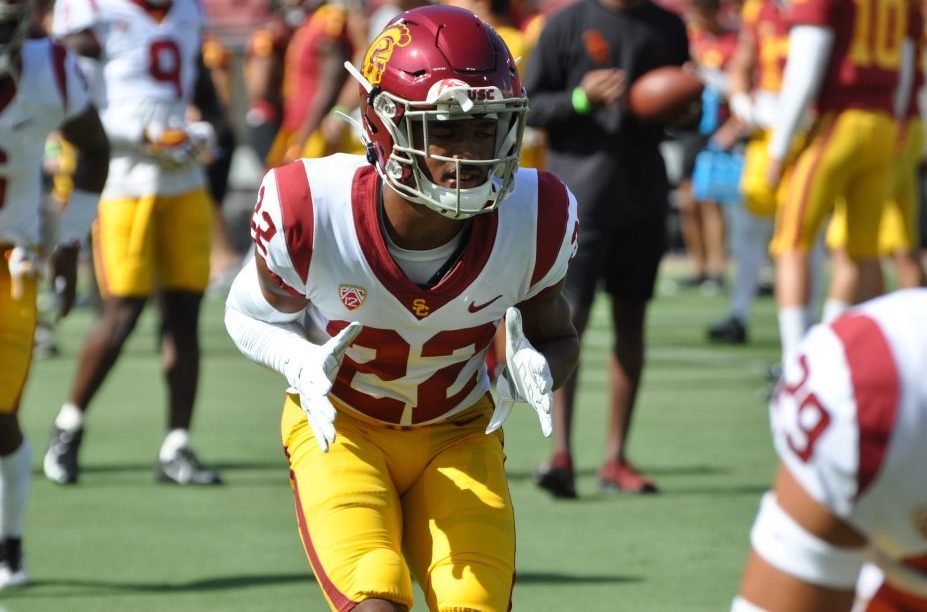 The USC defense is set to face an unknown quarterback this weekend, as Cal has not announced a starter between Chase Garbers, who started the season and is now cleared after recovering from a broken collarbone, and Devon Modster, who took over the Garbers and played his best game of the season last week in a win against Washington State. But that won’t matter to a USC defense that already has its gameplan set.

“They’re very similar in what they do,” USC defensive coordinator Clancy Pendergast said of the two Cal quarterback. “We’re really just preparing for the system and whoever they put out there, we’ll be ready to defend.”

“That part doesn’t matter,” Burns said of not knowing the opposing signal-caller. “For us it’s always the same…The biggest thing we’re going to do, like we always do, is focus on doing a great of stopping the run, force the pass, protect the deep ball and minimize mistakes. It’s always going to be the same for us.”

One thing that hasn’t been the same for USC’s defense this season is the healthy players available from game to game. At various times this year, the Trojans have been without starters in defensive linemen Drake Jackson, Christian Rector and Marlon Tuipulotu, linebackers Palaie Gaoteote and Hunter Echols and defensive backs Talanoa Hufanga, Olaijah Griffin, Isaac Taylor-Stuart, Chris Steele and Greg Johnson.

The USC defense has struggled at times, and Pendergast said some of those issues have to do with the youthfulness on defense as well as the lack of consistency with who is out on the field.

This seems to be a game where plenty of pressure could be placed on the shoulders of the defensive backs, as USC could look to load the box and make the Cal quarterback — neither has completed more than 60% of his passes this season — beat them through the air.

“They’re a team that’s going to settle in and try to run the football first and foremost,” Pendergast said. “We have to be able to take away the run.”

This could also be a game where USC’s defensive depth is tested, and the Trojans might actually have that at their disposal in the secondary. With Hufanga and Johnson back, Chase Williams can again be the “Swiss army knife” — as Burns calls him — of the secondary, able to provide depth at any position. And the Trojans also feel comfortable calling on true freshman Dorian Hewett at cornerback, after the way he responded late in the game at Arizona State.

Burns said Hewett was one of the guys who took advantage of playing time, and didn’t shy away from the moment when he was called on to bat a deep ball away in the fourth quarter and on a potential game-winning drive. Burns said that he could see Hewett’s confidence soar after he got the start against Arizona and saw some time in that game. Burns said it looked like the light switched on that following week at practice and there was no more nervousness. When Burns turned to Hewett and sent him into the game against Arizona State, he said the freshman’s response was, “Yeah coach. I’m good.”

Burns called it the perfect response. And while he was confident that he had three true starters at cornerback, in Griffin, Steele and Taylor-Stuart, now he said that after the way Hewett has played recently, he has “three and a half, or four now.”

Running backs Stephen Carr and Vavae Malepeai both practiced again on Wednesday. That’s a very good sign in terms of their potential availability for Saturday’s game, as it appears neither had a setback after getting a full workload on Tuesday.

Wide receiver Tyler Vaughns was dressed for practice today. He was injured late in the game against Arizona State and tried to practice Tuesday but was unable to get through an early portion.

Defensively, Marlon Tuipulotu and Caleb Tremblay were both dressed for practice, but linebacker Palaie Gaoteote was not in pads on Wednesday.

Chris Steele and Isaac Taylor-Stuart were the cornerbacks with the first group, while Ralen Goforth went at middle linebacker next to Kana’i Mauga until John Houston showed up partway through the media availability portion of practice.

Running back Markese Stepp is out of his large walking boot but is still wearing a brace on his injured ankle.

Two Medal of Honor recipients attended practice and were introduced to the team, in Master Sergeant Matthew Williams and Staff Sergeant Ronald Shurer. Both were both presented the Medal of Honor for their actions in Operation Commando Wrath, which was carried out April 6, 2008, in Shok Valley, Afghanistan.