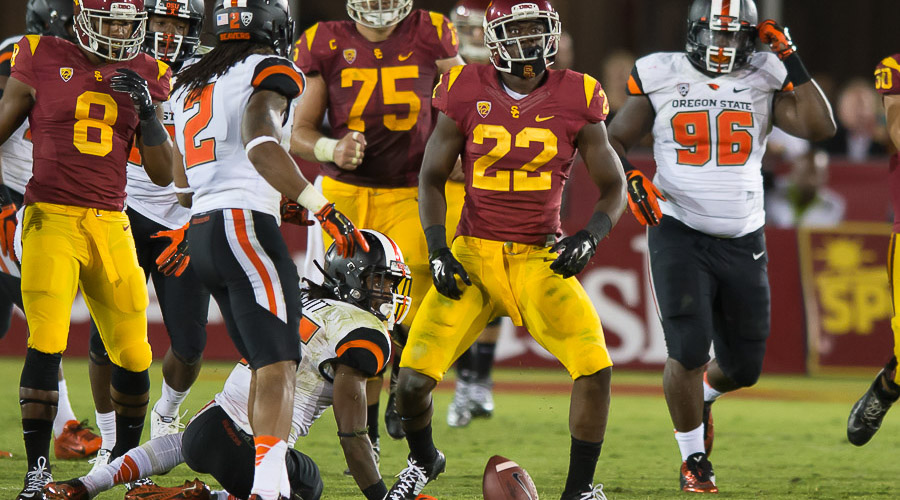 With it being the last day of finals, however, and the team having been away from the practice field since Sunday, things didn’t go quite as smoothly as Sarkisian would have liked during the almost two-hour, shorts-and-shoulder pads session, and he was open about it with the media afterwards.

“I thought today we were extremely average,” Sarkisian said. “That’s what happens when you have a few days off and you’re taking finals, and there’s stuff going on. We have to recapture these guys. Today wasn’t good enough for us to win. That’s why you come back early and you have a bonus Monday, and you prepare for two weeks, really, for a game. And so, the guys understand it. I expect us to be a lot better tomorrow.”

Woods out for bowl game

The biggest news to come out of the practice session was that starting nose tackle Antwaun Woods underwent surgery on his left pectoral muscle on Tuesday, and he has been declared out for the Holiday Bowl. The redshirt-junior out of Woodland Hills (Calif.) Taft originally suffered the injury this past Saturday.

In Woods’ absence, Delvon Simmons slid over from his normal defensive tackle spot and took reps with the No. 1 defense at nose tackle when USC went with their base look. The Trojans also have a couple of other options they could go with there, including Cody Temple, although he was sidelined Wednesday with a minor back issue that Sarkisian said is not serious.

“We’re in the infancy stages of game-planning here,” Sarkisian said. “We’re fortunate enough that we’ve got some versatile guys where Cody can play at that position, but very easily Delvon could step in there, Claude [Pelon] could step in there, quite honestly Leonard could play in there too, so we’ve got some versatile guys that we’re fortunate to have that way.”

Nebraska presents challenge on both sides of ball

With the Trojans defense set to face a Nebraska offense that features the nation’s No. 16 ranked rushing attack (248.3 yards per game), the loss of Woods comes at an extremely inopportune time. Running back Ameer Abdullah – the No. 11 rusher in the FBS – and dual-threat quarterback Tommy Armstrong Jr. pose a serious challenge, and Sarkisian said that it will be critical that the Trojans’ interior run defense comes up with a strong performance.

On the other side of the ball, Sarkisian praised the Cornhuskers’ secondary, their defensive front, and in particular, defensive end Randy Gregory, who has compiled 50 tackles, 10 tackles for loss and seven sacks in 2014.

“I know we have Nate Orchard – I don’t want to take anything away from Nate and some of the other pass rushers in our conference,” Sarkisian said, “but this guy can rush the passer.”

– Cornerback Kevon Seymour, who went to the sideline on Sunday and had ice on his ankle, returned to action on Wednesday. Linebacker Michael Hutchings also participated in the session after sitting out a majority of practice on Sunday.

– Wide receiver Steven Mitchell missed practice because he was studying for a final.

– Chris Hawkins, who spent a majority of the initial six bowl practices at safety, was back at his normal cornerback spot on Wednesday.

– The No. 1 offensive and defensive groups spent a good portion of the day going up against the scout teams. Bryce Dixon and Nelson Agholor each hauled in a deep touchdown pass during one of these periods.