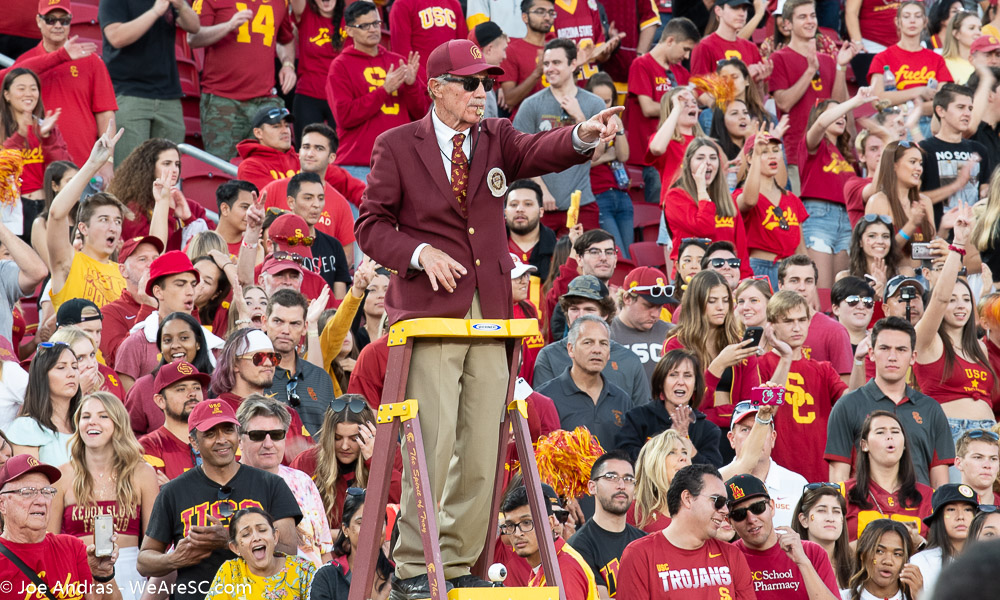 In this week’s roundtable, the WeAreSC staff tackles the question: “What are the three most underrated things (games, plays, people, etc.) in USC athletics history?”

I started this section thinking I’d talk specifically about the Notre Dame game of that year, but in doing so, realized the entire season needed to be mentioned. No, this isn’t a national championship team, but I think it’s a squad that deserves to be consistently mentioned among the best USC teams of all time. There was one off night in Corvallis against an Oregon State team that went on a 9-2 run to finish its season. This USC team pitched three shutouts in a span of four games and held a seven-win Notre Dame team to 31 yards (31!) and one first down through three quarters, and 15 of those came on the final play of the third quarter. This team absolutely destroyed 10-win Ohio State and Oregon teams, allowed a nation’s-best nine points per game, nation’s-best 134.4 passing yards per game and second-best 221.8 total yards per game. I’m not going to guarantee they would have beaten Florida or Oklahoma in the national championship game, because who knows how those teams would have matched up. But also, I guarantee they would have beaten Florida or Oklahoma.

Really, USC men’s basketball’s entire 2009 Pac-10 tournament run deserves mention here. This was the first time a No. 6 seed won the tournament title and it was probably USC’s only way into the NCAA Tournament. USC beat No. 3 seed Cal and No. 2 seed UCLA on the way to the final, and was down by one against Arizona State with around 50 seconds left. The Sun Devils had the ball and, more important, Pac-10 Player of the Year and consensus All-American James Harden had the ball. Harden drove to the basket but USC guard Daniel Hackett drew a charging foul. After Hackett made two free throws to put USC up by one, Harden again brought the ball up and after a USC switch, found himself guarded by USC big man Taj Gibson with 24 seconds left. Harden went left, Gibson went with him and got all the way up for a clean block on a layup attempt. In a do-or-die situation, a potential Hall of Famer got two chances to win the game against USC and the Trojans defense came up with stops both times. USC ultimately ran up against a Michigan State team that went to the NCAA championship game, but that shouldn’t take away from this defensive stand being discussed more as one of the great moments in USC basketball history

You could probably have a few of USC’s rushing records here. I don’t know if enough is made out of Charles White’s 6,245 career rushing yards, where No. 2 Marcus Allen would need a 1,435-yards season to catch him. But Ricky Bell ran for a USC-best 347 yards in one game–53 yards more than Reggie Bush’s unreal performance against Fresno State–and sits at No. 4 all-time in USC history with 3,689 career rushing yards. His 1,957-yard season in 1975 is No. 3 on USC’s single season list, behind Allen and White’s 2,000+ yard seasons. USC’s older generation of fans likely appreciates Bell an appropriate amount, but he might be forgotten a bit with the newer generation, as the Heisman Trophy winners are usually seen in a class by themselves. Bell is one of just three Trojans–along with O.J. Simpson and Matt Leinart–to finish twice in the top three of Heisman voting.

1) Although USC is considered for good reason a “football factory,” I think one of the most underrated “things” was the 1971 men’s basketball team (24-2), which featured guards Paul Westphal and Dennis “Mo” Layton, forwards Joe Mackey and Ron Riley, and center Bill Taylor. It was head coach Bob Boyd’s greatest team. Unfortunately, in those days, only the conference champion advanced to the NCAA Tournament, and that was usually the school across town.

2) Although the removal of the Coliseum track made for better football viewing, the track was also used by the Trojans’ mascot, Traveler, the great white horse, who would complete a full gallop around the entire track after a USC score. Today, Traveler just trots behind the USC bench and his day is done. Nobody got more irritated with Traveler doing his “360” than late Notre Dame head football coach Ara Parseghian, who watched Traveler gallop behind the Irish bench at full speed many, many times, thanks to Trojans superstar tailback Anthony Davis.

3) This may come as a surprise to some, but the one really underrated thing over the decades that is no longer a consistent tradition is when the Trojans would gather in the end zone next to the Coliseum players’ entrance tunnel and get fired up by gathering close to each other in a massive circle, jumping up and down, and then running across the field to their bench. In the old days, no coach led that “tradition” better than the late Marv Goux and later continued by former Trojans assistant Ed Orgeron. Nowadays, the Trojans come onto the field after a curtain is opened at the mouth of the tunnel, and the players just run directly to the bench without any spirit buildup. I miss that, and I think it fired up the Coliseum faithful, as well.

1) The 1996 streak-breaker against Notre Dame.  Bad year, not a great team, ugly and sloppy game … but it was beautiful,  and it may even be my second-favorite game of all time.  The streak was just so oppressive and humiliating.  I remember it all: the missed extra point, Delon Washington’s two-point conversion, Mark Cusano’s batted pass.  Great stuff.  And the Coliseum was electric in that overtime period.

2) The goal-line stand against Cal in 2004.  Start with the fact that a loaded USC team with Leinart, Bush, and LenDale was facing an opponent that may have had a better offensive backfield (Aaron Rodgers, Marsawn Lynch, and J.J. Arrington); that didn’t happen very often.  Throw in that Cal had beaten USC the year before, that USC’s offense struggled all day while Rodgers consistently moved the chains with short, pinpoint passes.  Add a sold-out Coliseum, GameDay, and a big national audience.  Throw in that when Cal had 1st and goal inside the 10 at the end of the game with everything on the line that Carroll apparently smiled and asked his defensive players “Isn’t this fun?”  USC needs to keep Aaron Freakin’ Rodgers from getting nine yards to save the season and Pete isn’t stressed.  Amazing.  And consider just how much was at stake.  If USC loses that game, there is no repeat title, no Oklahoma beatdown, no undisputed national championship during Pete’s tenure.  Pete still would have had a great run; Leinart and Reggie would still be legends; but everything we know about that era would have been a little bit different, just a little bit less.

3) Erik Affholter.  His numbers were not impressive by modern standards.  He wasn’t big or particularly fast.  But he was a major weapon on those Rodney Peete-led teams and had one of the all-time great (and disputed) catches to beat the heavily favored Bruins in 1987.

2. Tim Tessalone- The Don of the media mafia

3. The history of kicking the post on the way from campus to the Rose Garden en route to the Coliseum.