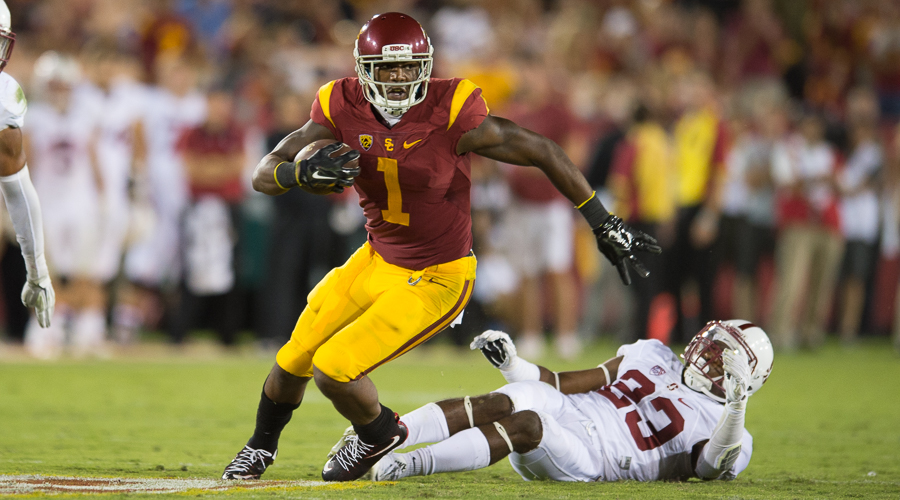 Garry Paskwietz: I know the first thought is going to be to establish the running game but I think the short passing game is going to be a big part of the ball control element that Clay Helton wants to establish. We all know what JuJu Smith-Schuster is capable of doing but the game last week against Utah State showed what can happen for the offense when guys like Darreus Rogers, Steven Mitchell and Deontay Burnett can get more involved too. And if the tight ends can get going that will help things even more.

Johnny Curren: No surprise here, the key for the USC offense to have success will rest on the shoulders of the Trojans offensive line, and whether or not they can hold their own against a physical Stanford defensive front. It’s going to be especially important for Neil Callaway’s group to produce some rushing lanes for the USC running backs early, which would not only allow the offense to eat up time to keep the ball away from the Stanford offense, but it would also figure to open up the passing game for Max Browne. After struggling mightily in this regard against Alabama in their first game, they did show improvement this past weekend – albeit against much weaker competition.

Greg Katz: The key for the Trojans offense against Stanford will be to establish a running game early and control the line of scrimmage. If this can be accomplished, they should make an effort to ball control the game to keep the ball away from the Stanford offense, AKA running back Christian McCaffrey. At the same time, the ball-control Trojans should pass when advantageous to an assortment of receivers, which means throwing the ball to somebody besides a double-covered JuJu Smith Schuster. Oh, and don’t forget to score points… lots and lots and lots of points. It may take over 30 points to defeat the Cardinal.

HelixTrojan: USC’s offensive line play will be the key for the Trojans. This unit took a step forward last week in a win against Utah State, but this game offers another test against a quality opponent. USC must be able to run the ball, and protect the passer against a disciplined and aggressive defense. Zach Banner and his teammates can draw a line in the sand in this game . . . it will set the tone for the rest of conference play.

GP: Tackle Christian McCaffrey. I realize that sounds simplistic but it’s not something the Trojans did a very good job of in the Pac-12 title game last year. I think the presence of Cameron Smith, who was not available for that game, is going to be a big factor on Saturday but I also think someone like Adoree’ Jackson could be important as the one player on the USC defense who can match up athletically with McCaffrey every step of the way. It will be very interesting to see how Clancy Pendergast schemes to slow down the Cardinal do-it-all star.

JC: How the USC defensive front performs against the Stanford offensive line – particularly with the Cardinal possessing one of the most exciting game-breakers around in Christian McCaffrey. USC’s defensive line and linebackers have performed well for the most part, particularly last week when they shut down a Utah State rushing attack that ran for over 400 yards in their opener. The Stanford offense obviously presents a whole new challenge in that regard, but they are breaking in three new starters along the offensive line. If the USC defensive front-seven can come up with a big performance and at least slow McCaffrey down, the Trojans will have a chance in this one.

GK: The key for the Trojans defense is to obviously try and contain or limit the damage that figures to be caused by Stanford’s Heisman Trophy candidate running back Christian McCaffrey. McCaffrey was a Trojans nightmare at last season’s Pac-12 Championship Game, and the Trojans must make sure they have McCaffrey located at all times, which means No. 5 could line up in the backfield or at various wide receiver spots. A byproduct of this strategy is not to get burned on play-action passes, which means the Trojans front seven will have to be disciplined and physical for four quarters.

HT: It’s not hard to identify Cardinal RB Christian McCaffrey as the player to stop for SC’s defense. The goal for SC is to limit touchdown scoring plays by McCaffrey, even if they give up some yards to the versatile Heisman candidate. I believe Trojan defensive coordinator will dial up quite a few run blitzes to take away gaps for the Cardinal running game.

What individual match-up do you think favors the Trojans the most in this game?

GP: Pendergast usually tries to take away the strength of an opponent, so that would mean the Stanford run game, while forcing Ryan Burns, who only has one career QB start under his belt, to beat you through the air. And while McCaffrey is also the best Cardinal receiver, the Trojans offer a secondary that brings a favorable match-up against the Stanford overall group of receivers.

JC: I’ll go with the Trojans secondary against Stanford quarterback Ryan Burns. He did perform solidly against Kansas State for the most part, but he definitely lacks experience, and that might hurt him here. The USC secondary could be a real strength of the defense this season. If Burns gets rattled early and makes some mistakes, I can see the Trojans safeties and cornerbacks making him pay.

GK: The match-up that favors the Trojans over the Cardinal will be USC’s defensive coordinator Clancy Pendergast over respected Stanford offensive coordinator and O-line coach Mike Bloomgren. Because of his NFL experience and playing against some of the pro league’s best running backs, it figures that Pendergast will have a slight advantage of knowing how to attempt to stop a running back like Christian McCaffrey. Since Stanford’s Bloomgren was once a four-year assistant offensive assistant coach with the New York Jets, it figures that Clancy’s pro experience will cancel out Bloomgren’s pro pedigree.

HT: I think that the Trojan slot receivers, Steven Mitchell and Deontay Burnett, both of whom scored TDs against Utah State, will have the advantage against the Cardinal third cornerback or safety assigned to defend against the them.