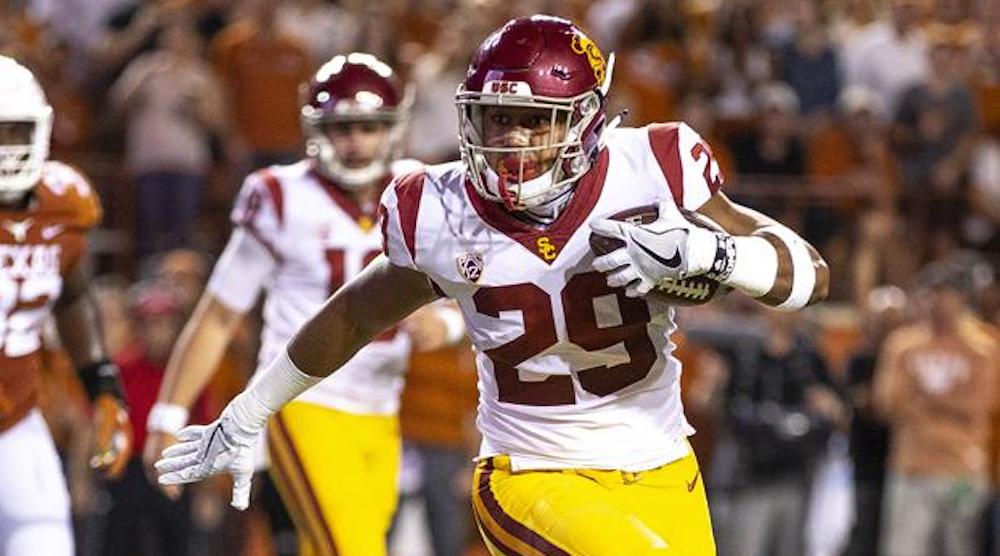 USC offensive coordinator Graham Harrell sat down with assembled media yesterday to answer questions about his offense, his path to USC, and specific players in the USC offense.

For this week’s roundtable, WeAreSC staffers share their immediate takeaways from what Harrell had to say, which can be found here.

I liked just about everything Graham Harrell had to say on Monday morning. Sure, there’s the Mike Tyson quote about plans and getting punched in the mouth, but Harrell immediately struck me as a guy who knows exactly what he was brought to USC to do, and knows exactly how he’s going to go about doing it. The thing that jumped out the most was when he talked about what he took away from playing under and working with Mike Leach.

“And that’s what I think Leach does an unbelievable job of is saying, ‘We’re just going to be great at these plays.’ And that’s it. I’m not going to worry about all the great stuff that’s out there or anything else. This is what we’re going to do, and we’re going to be really, really good at it.”

It seems like it has been a long time since USC had a small handful of offensive plays that they knew they could run at any time in any situation and have success with them. If Harrell can find those and develop that sense of knowing you can make important plays–not just any plays–that’s a massive step forward for this offense.

I also really liked the way he talked about Vavae Malepeai. Stephen Carr is so shifty and explosive, but backs who can simply run through arm tackles can be so dangerous in this offense. And even though Harrell has only seen tape and a small sampling of workouts from Malepeai, it’s obvious he’s excited about how he fits and what he can do.

My first impressions with Graham Harrell were that this may be the guy that could truly ignite the Trojans’ offense. Why? Harrell said things that really reminded me of Norm Chow in the areas of keep it simple, do what you do, and have a philosophy (now isn’t that refreshing). He was honest that if you wanted the Mike Leach Air Raid offense, then you should basically hire Mike Leach. The fact that he articulated the need for a running game and its benefits and showed that he had already had a preliminary opinion of the Trojans’ running back was spot-on. I thought he embraced the USC challenge of pressure from a year-to-year basis, and accurately said that only a select few of schools really have a shot at a national championship with USC being among that select group. Unlike some of the past USC offensive coordinators, I thought Harrell was genuine, knew what he wanted to accomplish, and appeared to be “real” in how he would handle his quarterbacks and the offense in general. Although he is still young (33), he was self-assured with what he was saying yet not coming over as cocky or “playing the scene.” All in all, I was impressed and believe the loss of Kliff Kingsbury and the hiring of Graham Harrell in the long run may have been a blessing in disguise.

I thought his point about keeping it simple was interesting. Not sure an overly complicated offense was our problem last season but an ineffective muffled scheme was. So I liked that. His most in-depth assessment was about the wide receivers which also makes some sense. I truly think for him the QB position is an open switch. Not sure that’s really true for CCH. No mention of tight ends at all, also telling to me. Passing mention of run game but an acknowledgement of the need to defeat a defense in short yardage when the defense loads the box. Is this a reference to power or formation? Time will tell. I noticed too that his review of the running backs went from Malepeai to Stepp and then to Carr. I don’t read too much into that necessarily but was interesting to me. I didn’t expect to hear a lot about scheme directly and Harrell was spot on in keeping that wide open. Nice young man with a huge step function change from OC at UNT to OC at USC.

Two things jumped out at me.

The first is Harrell’s consistent refrain that the goal of this offense is to simplify things so the players can play without having to think too much.  Obviously there’s a balance to be struck.  If you called a QB sneak on every down, nobody would ever have to do any thinking.  But it does seem that the best college offenses are the ones that make things simple.  You have young guys and limited time, and overly complicating things has been the downfall of many college coaches, including I suspect Paul Hackett and his complicated West Coast playbook.  Spreading the field should lead to a lot of easy reads for the QB’s, because opponents will be forced either to simplify their defenses (by playing a basic zone coverage) or have their third and fourth-best cover guys on USC’s third and fourth-best receivers.  Unless the opponent is Alabama or another team with top-flight skill position talent, there should be a mismatch to be exploited.  I think the offense will put up much bigger numbers than it did last year.

That being said, there is no such things as a magic offense, and there is nothing particularly novel about what USC is doing.  Much of the college football world has moved this direction.  And, of course, not everybody does it well.  The question is whether Harrell can really coach this offense – is he like Mike Leach or just somebody who knows Mike Leach? – and whether USC’s players will execute when it matters most.

Second, I would be very happy reading this interview if I’m JT Daniels.  There has been a lot of talk about whether there will be an open QB competition, and Harrell assures us there will be.  But multiple times, Harrell talks about how there is no substitute for reps.  Well, on this team, only one guy has a lot of reps.  That’s obviously a big plus for JT in an area that Harrell thinks is very important.  I just don’t know how Sears or Fink overcome that.  Besides, an offense that gives the QB the freedom to read a defense and call his own plays at the line seems tailor made for a guy who famously called his own plays in high school.  And an offense that allows the QB to quickly diagnose the offense and get the ball out of his hands seems like a really good fit for JT, who should thrive in an offense that requires him to be a point guard rather than a playmaker with his feet.  I know there are posters on this board who are hoping Jack Sears wins the job – and I think Sears could be great – but it’s always hard to unseat the incumbent starter, and I’d be surprised if anybody but JT Daniels is starting against Fresno State this fall.