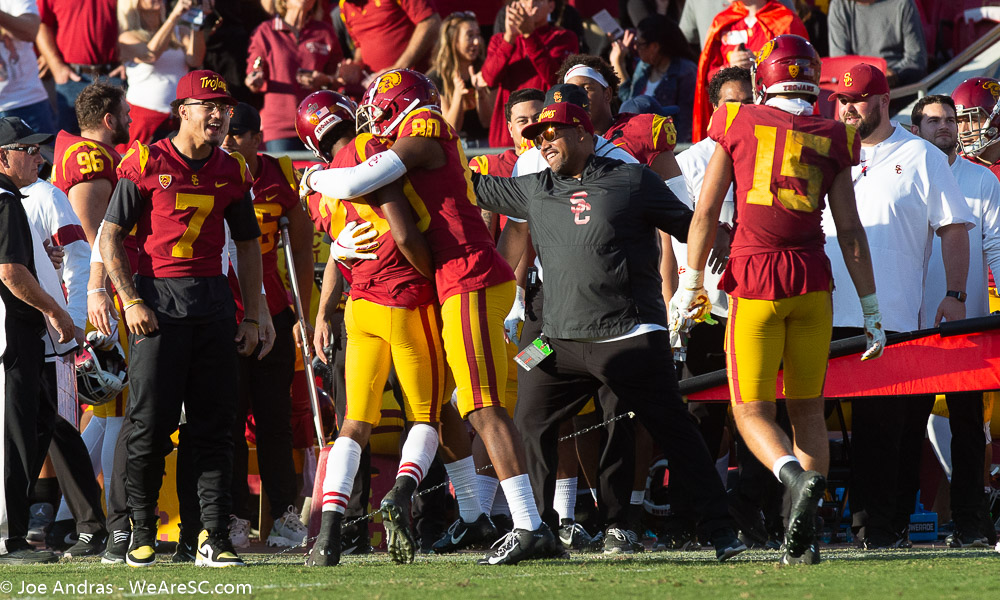 This week, the WeAreSC staff answers the question: “Without USC football this fall, what are you most disappointed to miss out on seeing?”

There were so many individual performances I was looking forward to seeing this fall, starting with the second years’ of Kedon Slovis and Drake Jackson. Seeing Justin Dedich potentially get major playing time and Alijah Vera-Tucker try to become another first-round offensive line selection from USC were at the top of the list. Tyler Vaughns potentially setting the career receptions record at USC and just what kind of passing numbers this offense could put up building on that UCLA game where four different receivers surpassed 100 receiving yards. I wanted to see Talanoa Hufanga and Palaie Gaoteote in this new defense, and Chris Steele’s second season with an elevated comfort level.

Outside of team-related issues, I’ll miss USC football adding that extra layer of connection to friends and family, specifically filling my grandmother in early in the season–any jersey changes and impactful newcomers, until she gets them all squared away and can announce her new favorite players for the season–and the growing appreciation my son has for USC football–he’s asked for months when the Trojans get to try to play the Ducks again.

While there’s still hope that this winds up as just a slight delay rather than a full-blown cancellation, there are going to be plenty of disappointing reminders of the lack of USC football this fall.

The games take care of themselves, but I will miss all the pregame buildup of fun conversation in the press box and watching and hearing the Trojans Marching Band take the field, which generally gets everybody fired prior to kickoff. Whether the team lives up to its annual lofty expectations, the TMB always plays and marches with spirit at a national championship level.

An added melancholy thought, I will miss driving up to the Coliseum and back for home games with journalistic legend Steve Bisheff, a USC grad and member of the USC Athletic Hall of Fame, who never ceases to regale and entertain me with his stories of John McKay, John Robinson, Pete Carroll and the world of USC football. And if time permits and it’s not too late, our trips to the Katella Deli for a post-game meal of continued conversation and memories of the sports world in general and our beloved Alhambra High journalism teacher Ted “Mr. T” Tajima.

The most disappointing part that I will miss about not having the 2020 college football season is the interactions around the Coliseum, the tailgates, the conversations with friends, alumni, and fans. I know that this is a cliche answer, but the withdrawals that I have been experiencing have caused me to reflect and appreciate the little traditions that I have taken for granted. There are but a few things in my life that are as constant as the changing of the seasons, a staple of consistency  that  can fundamentally and universally be landmarked years in advance when planning an itinerary, college football has always provided that platform. All who use the forum to host annual  meetings, social gathers, or simply for entertainment, share in that the football season  provides that justification to come together as an advocate and adversary knowing that the one commonality is football.

College football checked off those boxes for me, and gave me a relevance, a sense of purpose that allowed me for a Saturday afternoon and into the late hours of the night; share a common passion of being amongst 70,000 strangers that I call my brethren, while the games allowed me to evoke passion–the inner “fanboy”roots, cheers, laughs, cries, and and loses his mind during the 60 minutes of pandemonium.

While we all must contend with the new normalities of life, we clench our fists holdings on to the hope that this detour, hiatus, temporary suspension of our reality, allows us to reset, and appreciate, just how fortunate we have been to experience live entertainments regardless the outcome of games. There is just nothing like it!

I wanted to see:

1) The new and improved defense and special teams