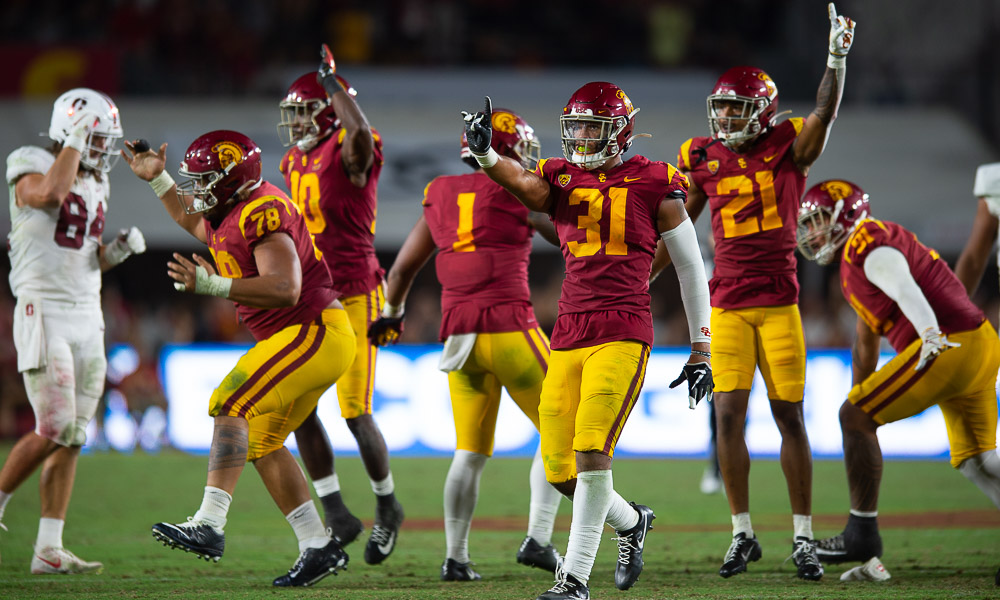 With the position open, WeAreSC staffers give their thoughts on names that would be intriguing options as the next defensive coordinator at USC.

Currently over performing his salary. According to USA Today, Arnett is earning just under $200k base salary. During Arnett’s five-year tenure as a linebacker coach, with two years as the defensive coordinator, the San Diego State Aztecs defense has been amongst the best in the country in several defensive categories. First in interceptions with 87. Sixth in rush defense at 121.1 per game. Sixth in total defense (316.4). Ninth in scoring defense (19.7). Tied for 10th in turnovers forced (98). Tied for tenth in interceptions returned for touchdowns (11). Eleventh in pass defense (195.2 yards per game).

Arnett’s Defensive Scheme features 3-3-5 concept which is similar to what USC has been running. Arnett should recieve at least an interview from the Trojans.

Has ties to the Pac 12 former University of Colorado head coach and 2016 National Coach of the Year Honors.  Could bring head coaching experience and organizational leadership to the defense. He has ties to Mike Bohn, as Bohn hired him at Colorado.

This is a homer pick considering Richards ties to USC as a former player who graduated in 2001 under Pete Carroll. His energy and attention to details makes him a crowd favorite and one who can get the most out of an underachieving USC unit.

The former Texas and University of South Florida head coach has a resume and a pedigree that commands the attention of young men. He can lead the defense and develop the linebackers, in a more traditional 4-3 base front. He is outstanding with recruits. His Defense in 2019 ranked 32nd in the FBS in total defense.

1. Jack Del Rio: Would be an outstanding choice if he was willing to “work under” Clay Helton. JDR would want complete control of the defense and would probably demand a culture change to the program in general.

2. Joe Barry: A former USC linebacker and coach, he, too, would be a worthy DC if given the opportunity. He would bring a toughness and plenty of college and NFL experience and understands the expectations of USC football.

3. Kris Richard: Now that the Dallas Cowboys have been eliminated from the NFL playoff picture, Richard has proven himself to be not only experienced but would also understand USC like Del Rio and Barry.

4. Kevin Bruce: Another outstanding candidate but probably would cost too much and bring too much old school cardinal and gold brimstone, In addition, he probably wouldn’t want to give up his unique position of writing his weekly “Defensively Speaking” for WeAreSC.

There are some reports that the Dallas Cowboy coaches won’t be retained, and if that’s the case, Kris Richard would be a really intriguing option at USC. He’d be able to command the defensive room and would be a strong recruiter, thanks to his success coordinating the Seattle defense when the Seahawks were leading the NFL in scoring defense just about every year. It’s easy to imagine Richard finding a landing spot in the NFL, but he’d be a positive addition to the Trojans.

I’m on board with Greg’s push for Jack Del Rio as well. I think it’s always a positive to have multiple former head coaches on the staff and Del Rio brings experience and a sense of gravitas to the position.

And sticking with NFL (or former NFL) coaches, Saints defensive coordinator Ryan Nielsen is a very interesting option. He hasn’t served as a coordinator at this level, but he was responsible for producing some really great defensive lines during his tenure at North Carolina State, including helping produce four defensive linemen picked in the first four rounds of the 2018 draft.

Yes, all three of those guys played at USC, but I don’t think that’s a requirement for this position.

As for college coaches making the move, I’d take a long look at Washington’s Pete Kwiatkowski. Jimmy Lake gets so much attention for the Huskies, but he and Kwiatkowski served as co-defensive coordinators up there before Lake’s promotion to head coach. Maybe Kwiatkowski is comfortable sticking around as defensive coordinator under Lake. Maybe USC could bring someone in who served as one of the architects of one of the conference’s best defenses.

Another interesting name for me is Todd Orlando, who was just shown the door by Texas head coach Tom Herman, as he looks for answers for the Longhorns. Orlando has served as the defensive coordinator at Connecticut, FIU, Utah State, Houston and Texas. The Longhorns’ defense cratered in 2019, but in his first season at Texas, Orlando took the defense from 94th to 41st in total yards allowed per game, and from 90th to 29th in scoring defense.

I’m not going to give specific names.  I’m going to talk about what I would like to see USC do.

There are three routes you can go.  The first route is to offer the job to established defensive coordinators.  This is the Kliff Kingsbury route, just on the other side of the ball.  Think Brent Venables, Dave Aranda, et al.

The well-known guys, of course, will be hesitant to wade into this grease fire.  The program is a mess, recruiting is in the dumps, and the fan base is one part demoralized, one part furious, and one part apathetic.  Brent Venables isn’t leaving Clemson to work for Clay Helton.  So if you try to go the established D coordinator route, you’re going to have to offer lots of money and multiple years, and I think you’re still likely to strike out.

The second path is to go with a young, up-and-comer, probably from a smaller school.  This is the Graham Harrell route.  This is a higher risk strategy, of course, because you can’t be sure what you’re going to get.  Nick Saban plucked his current defensive coordinator out of UT San Antonio.  Of course, he’s Nick Saban, which means that he’s far more likely to be able to find a diamond in the rough, and he’s probably really the Alabama defensive coordinator anyway.  I think Clay Helton will go this route, and we’ll just have to cross our fingers that he gets it right.

The third route is to go with a USC insider.  Greg listed a bunch of those guys in his response.  I’m usually suspicious of the insider, he-gets-SC hiring racket.  But in this case, I’m not so sure.  You might be able to land a JDR or a Kris Richard – both legitimate defensive coordinators – because of their love for USC when somebody with their resumes might otherwise be hesitant.  And Clay Helton’s bargaining power is at an all-time low right now.  Somebody like JDR might not only be able to insist on a big paycheck, he might be able to insist on how practices will be run, for example.  If so, maybe he can use his leverage with a drowning coach to force necessary changes and instill some much-needed toughness into this program.  Because unless that happens, as Bill Murray told us, it just doesn’t matter, it just doesn’t matter, it just doesn’t matter….