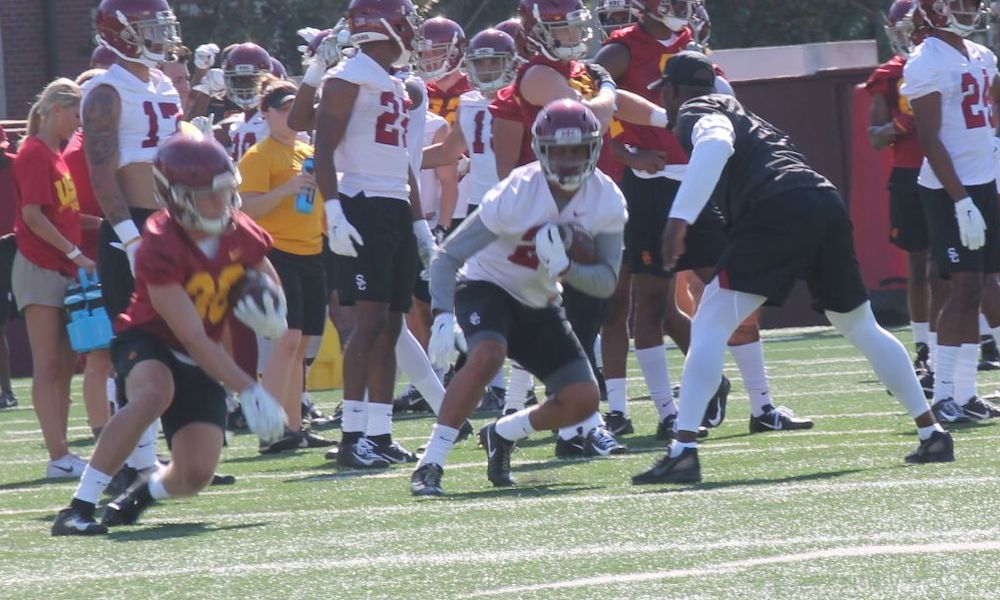 1. Ajene Harris and Biggie Marshall: These are two of the veteran seniors in the secondary so it’s no surprise that they are playing well, it’s just good to see how well they are playing early in camp. Ajene had a pair of interceptions on the first two days while Biggie has been very aggressive in coverage that has resulted in passes being batted down rather than contact that could result in a flag.

2. The QB competition: It’s hard not to be paying attention to what’s going on at the QB spot and it’s been a lot of fun to watch so far because Matt Fink and Jack Sears have both had nice moments, in addition to the freshman JT Daniels who has definitely come in and impressed from his first snap against the 1st team defense in an 11-on-11 drill when he threw a 50-yard touchdown.

3. Toa snapping issues: If we’re talking about things that stand out after three days you have to include the fact that Toa has had some issues with snaps on two of those three days. I happen to think that he will be fine as he gets adjusted to being back at center (he really hasn’t played the position much in his career at SC) but there is a lot riding on him taking over in the middle of the line so hopefully the rust gets shaken off sooner rather than later.

1. I thought that the defensive intensity really came alive on Saturday. It tells me that while the talent appears to be there, this defense will go as far as its intensity take it. They certainly have the leadership and experience to get the job done. However, we’ll get a better idea of how this side of the ball looks on Wednesday when the helmets and pads are put on. I was also impressed by the overall communication between players on defense. I liked the spunk of the freshmen and their ability to physically challenge their older classmates. One “confrontation” that stood out to me on Saturday was when true freshman wide receiver Amon-Ra St. Brown went facemask-to facemask with sophomore safety Bubba Bolden after a combatant pass play. There were messages exchanged but no punches. I like the “edge” of this freshmen class.

2. Offensively, I liked how quarterbacks Matt Fink and Jack Sears met the early challenge of freshman JT Daniels. Fink and Sears have really upped their game and didn’t appear phased by the freshman prodigy. One offensive player that stood out for me was sophomore wide receiver Tyler Vaughns who is playing at an elite level. This is one former high school superstar that is coming into his own. Regarding the offensive line, I am not alarmed but am concerned over the center snapping accuracy in the shotgun. Toa Lobendahn is shaking off the rust of not having played center last season or during spring ball. On a positive note, senior tailback Aca’Cedric Ware continues to impress with his knowledge of the offense and his field awareness when getting through the line. As for sophomore TB Stephen Carr, you like what you see in terms of back surgery recovery, but who knows what happens with the real hitting starts on Wednesday.

3. Along the defensive line, sophomore nose tackle Brandon Pili is really coming into his own. Brandon almost intercepted a JT Daniels attempted middle screen on Saturday, and he has the beginnings of an all-conference defensive linemen. There were also glimpses of standout play by sophomore linebacker Levi Jones who looks really ready to contribute in 2018. I would be remiss not to mention the play of senior CB Ajene Harris who has looked great and could be another potential all-conference pick if he continues to impress. Two interceptions in two days ain’t bad.

1) The return of Stephen Carr – there’s no doubt that Carr will play a huge role as the primary running back in this offense, so his clearance to fully participate in Fall camp is huge. He looks like his old explosive self so far, and he’ll have plenty of help from experienced and solid veterans in Aca’Cedric Ware and Vavae Malepaei.

2) The defensive starters are ready to play game one tomorrow – guys like Porter Gustin, Ajene Harris, Christian Rector, Brandon Pili, Jordan Iosefa, et al. look, stronger, faster and better. Finding out WHO and HOW MANY of the talented reserve players has taken the next step in their development is a key for this Fall camp session.

3) The freshmen who don’t look like freshmen – so far WRs Amon Ra St. Brown and Devon Williams have not skipped a beat in moving from high school to the college practice field. Physically, St. Brown and Williams look like upper-classmen, not true freshmen.

1.The Quarterback Competition: It’s still incredibly early in the quarterback evaluation process, however, I’ve noticed some trends early on. I think we can all agree that Clay Helton has his own way of being brutally honest on the men in contention for USC’s starting quarterback position. When Helton tells us the quarterbacks had an “OK” day, that’s not a good sign. He wants to see more out of these quarterbacks, especially in live situations. If this trend of “OK” play from the quarterbacks continues through the fall — I’d say it’s advantage JT Daniels. Matt Fink and Jack Sears need to make a big breakthrough soon, or the starting job will, by default, be awarded to JT Daniels — the young hype train who has made several “wow” throws early on.

2. Shouldn’t we expect this? Throughout the opening days of fall camp — and especially this past Saturday — the defense has been putting on a solid performance. This is certainly encouraging to many, but it is also a great source of distress for Trojan football fans concerned about the offensive side of the ball. But hey, isn’t there something natural about a offensive unit having struggles early on in camp? (Let alone an offensive unit which is looking to replace it’s leading passer, rusher and receiver from the prior season?). Look, all I’m saying is hold your horses on crying doom for this offense. Let’s see how the O progresses as it faces live action from the defense throughout this week of camp.