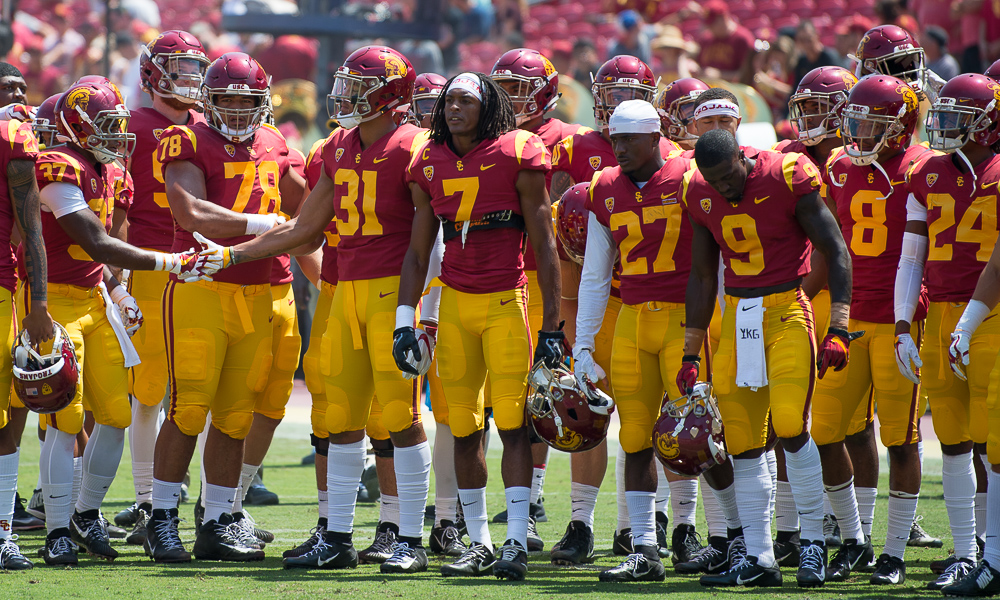 What stood out to you from the season opening win over UNLV?

Garry Paskwietz: I thought the Trojan running backs performed well, all three of them, and that’s a very encouraging sign for how they can be used moving forward as a complement to what we saw from true freshman JT Daniels.

Greg Katz: I think the thing that stood out to me was the poise of true freshmen, quarterback JT Daniels and receiver Amon-Ra St. Brown. Given the nature of their inexperience, given the expectations of both former prep superstars, and given the fact that most true freshmen would make some sort of glaring mistakes due to inexperience and “Coliseum fever”, it was a remarkable performance by both kids.

HelixTrojan: The chemistry between QB JT Daniels and WR Amon Ra St. Brown. We saw it during Fall Camp, and it carried over to the first college game for the dynamic freshmen duo from Mater Dei.

Angel Viscarra: I might be alone on this one, but I was surprised to see JT Daniels finish the day with 35 passing attempts. Coming into the ball game, I really expected the Trojans to spend the majority of the game running the ball — working in a Daniels passing attempt here and there. But this coaching staff definitely showed their confidence in Daniels, letting him throw it early and often against the Rebels.

Give 3 things that need to happen in order for the Trojans to come away with a victory at Stanford?

1. Dust off the playbook – I would go back to the playbook that was used for the first Stanford game of 2017 when the Trojans dominated on the ground and study what worked so well in that game. As one former USC offensive lineman said after the game “for the first time in 10 years I watched Trojan football tonight”. It was a game plan that saw the Trojans impose their will against a Cardinal front that featured Harrison Phillips in the middle, and he’s gone to the NFL, so it would be a good time for the Trojans to run the ball in a similar fashion.

2. Stop the run – Plain and simple, the Cardinal will want to avoid two straight games where their Heisman candidate tailback Bryce Love is slowed by the opposing defense as he was in the opener against SDSU. On the other side, the USC defense will want to avoid giving up 300 yards on the ground like they did last week against UNLV. Only one team will get its wish, and it would go a long way toward a victory if that team is USC.

3. Vaughns and Pittman return to form – One of the biggest surprises of the opening game win for USC was the “struggles” from Tyler Vaughns and Michael Pittman in the pass catching department. These are two normally dependable guys and I do not expect those troubles to continue, and if they can deliver their usual quality play, to supplement the obvious chemistry between Daniels and St. Brown, we could see a passing onslaught that will be too much for the Stanford secondary to keep up with.

1. Rush defense – On the surface of it all, the only thing for the Trojans worse than giving up 308 yards on the ground to UNLV would be playing Stanford and its traditional physical ground game the next game. However, Stanford’s All-America tailback Bryce Love couldn’t even crack 100 yards rushing against San Diego State last week, so there’s reasonable hope. However, it would seem unlikely that Stanford’s rushing attack could be held the Cardinal two games in a row. If the Trojans are going to keep Stanford’s offense in check, it begins by stuffing the run. It figures that both the Trojans and Stanford learned something from the San Diego State game film as it pertains to running the ball and stopping the run. Therein provides a real coaching game plan and chess match.

2. The secondary – If you checked out Stanford’s game against San Diego State, you saw what happens when you stop the Cardinal running attack. Stanford head coach David Shaw directs his team to attack through the air and, boy, did San Diego State’s secondary pay a heavy price. The Trojans’ revamped secondary will also have its maturity thoroughly tested. Cardinal junior quarterback K.J. Costello and his lethal senior receivers like JJ Arcega-Whiteside and Trent Irwin and a bevy of future NFL tight ends led by Kaden Smith will provide the air acid test. Perhaps no area of the defense would be under more duress than the Trojans’ secondary, which will have to provide run support and be close to pristine in pass defense.

3. Offensive line domination – If the Trojans’ are going to discard the memories of the 2017 season in which the Cardinal and Gold were physically inconsistent, especially against power teams, they’ll have to show some real determination. The good news is that the Trojans were successful for the most part last season in their two meetings and beatings of Stanford. With the Trojans’ rookie quarterback JT Daniels getting his first road game baptism and no less a big conference game, JT’s success will likely go hand-in-hand if the offensive line does its job of providing the wunderkind quarterback with a running game and dominant pass protection.

1. Offensive Line Improvement – It has been a common theme throughout camp that this unit needs to be better and more consistent, especially in short yardage situations. To beat Stanford, the offensive line will need to execute on downs and distances that SC can run the ball in order to move the chains. SC can’t become a one dimensional passing team. The goal is to maintain possession and score TDs, in order to keep Stanford’s offense on the sidelines.

2. Put the D back in Defense – We know what Stanford brings in the running game with Bryce Love who must be contained first and foremost, which is a challenge to the Front 7 on SC’s defense. But the Cardinal can also hit for impact plays in the passing game. So the Trojan coverage units will have to be good, especially in jump ball situations with Stanford WR J.J. Arceaga-Whiteside.

3. Don’t Beat Yourself – Taking care of the ball (no turnovers) and limiting penalties are always key factors in a big road game. As the Trojans go to The Farm, disciplined play will keep SC in a position to make plays, instead of playing catch-up from behind the 8-ball.

1. I’m definitely not going to be alone on this one. USC must be able to stop Bryce Love and this Stanford rushing attack if they want any chance in this one. It’s a national game, so you know Love is going to come out like a caged animal this week, looking to redeem himself after getting shut down by San Diego State a week ago. The Trojans in the box, upfront defensively really need to show up this Saturday evening.

2. The USC running game is going to be crucial for the team this weekend. When the Trojans topped Stanford in convincing fashion in Week 2 last season, it’s because they were able to pretty much run the ball at their will. If the Trojans can get their three-headed rushing monster (Malepaei, Ware, Carr) going, along with the offensive line, it’ll be a huge help.

3. Last week against San Diego State, KJ Costello put on an absolute show (332 yds, 4 TDs, INT) against the Aztecs — especially in the second half. The Trojans need to generate a solid pass rush this week, before Costello is able to get into a rhythm with some lethal receivers like JJ Arcega-Whiteside (6 rec, 226 yds, TD last week) and Trent Irwin.