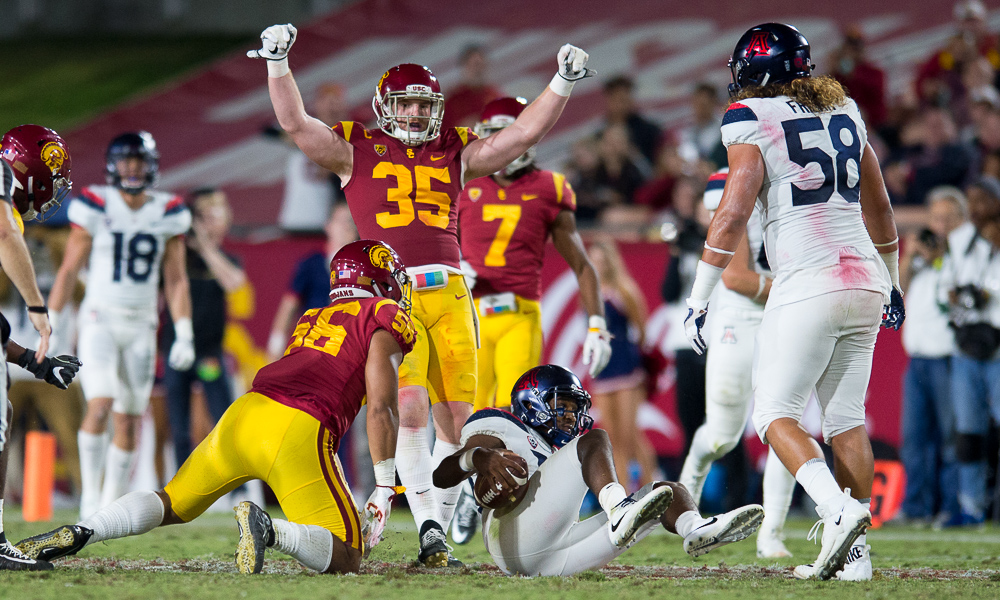 1. What will be the key to slowing down Arizona QB Khalil Tate?

Garry Paskwietz: Same as last year, do the best you can to keep him contained within the pocket, and unable to take advantage of his dangerous skills once he breaks the pocket. Khalil has been battling an ankle injury and it remains to be seen how that will impact his running. Last year we saw Jordan Iosefa do an admirable job against Tate while filling in for Porter Gustin at OLB, now Iosefa is a starter opposite Gustin. Porter has obviously been a bright spot in causing disruption in the backfield this year, something the Trojans have otherwise struggled with. Can Iosefa reprise his play from last year? What about a Christian Rector or Jay Tufele in the middle? One wild card could be Palaie Gaoteote, who saw extended reps last week and could be effective in chasing Tate around.

Greg Katz: The key to slowing down Khalil Tate will be to stay extremely discipline in the front 7 and for the offense to consume long drive and score touchdowns and no field goals. If Tate is left unchecked, he will make life miserable for the Trojans, especially in Tucson and coming off a big win at Oregon State. Another key is to rough him up at every chance and change his concentration from looking down field to be aware of getting smacked around. Then again, the Trojans’ pass rush has done much consistent smacking around up to this point. Last season, the Cardinal and Gold did a relatively good job in the first half against Tate, but Tate got loose in the second half in the Coliseum. Remember in the second half last season, the Wildcats outscored the Trojans in the second half 29-28, and Tate finished with 161 yards rushing (26 carries) and an electric 32-yard TD run in the third quarter.

Helix Trojan: There are two keys to handling Khalil Tate: the first is to keep outside containment, which will fall on the shoulders of LBs Porter Gustin and Jordan Iosefa. Tate is as good as any running back in the Pac 12 when he breaks the line of scrimmage, so SC’s front 7 on defense will have to repeat last year’s performance. The other key is to score efficiently on offense – you want Arizona to play from behind and pass more, as well as keep Tate on the sidelines as SC’s offense dominates time of possession.

Angel Viscarra: For the most part, we have not seen Khalil Tate rush the ball as effectively this season as he has in the past. Last year Tate was the epitome of a dual-threat quarterback, rushing for over 1,400 yards. However, four games into the 2018 season, Tate has accrued just 32 yards on the ground. USC should hope that this trend would continue on Saturday. The Trojans will look to edge defenders such as Porter Gustin and Jordan Iosefa to contain Tate from finding open space. If Tate finds his running legs against the Trojans, it could mean some serious trouble for Troy.

2. How do you handle the USC running back rotation? Do you stick with the two-backs that worked well last week, or do you put Aca’Cedric Ware back as the third option if his knee is ready to go?

GP: I think it’s difficult for any back to get into rhythm when you’re rotating three, especially since the Trojans rarely commit to 40 carries a game. And so if that’s going to be the case I see merit in rotating two, and right now my two would be Carr and Malepeai. It’s nothing against Ced Ware, I would have no problem going to him if needed, but I think Carr and Vavae complement each other well as a 1-2 punch.

GK: I think you handle the running back rotation by who performed best the previous game (Washington State). Considering what I saw, if there is any credibility in selecting a starter, one would think that the tailback that should start would be Vavae Malepeai. The young sophomore scored two touchdowns and ran with authority and head-nodding wiggle. Of course, it helped having an actual fullback to lead him into the hole. As far as Aca’Cedric, I think he should play, but he should be eased back like what has taken place with Stephen Carr. Since all three tend to play anyway, continue to play the hot runner, which should be evident in the first half.

HT: I think you insert Aca’Cedric Ware back into the rotation at running back. The game will determine who has the hot hand, and whom to feed the ball. I would really like to see SC run the ball more with these backs, and run it efficiently.

AV: If Aca’Cedric Ware is healthy for the Arizona game, I think it’s a no-brainer plugging him back into this running back rotation. Of course, this coaching staff should proceed with caution about how they use Ware in his first game back. But keep in mind that after this weekend’s tango in Tucson, Ware will have a bye week to further nurse that knee if it is still bothering him. While many feel that Stephen Carr and Vavae Malepeai solidified themselves as a tandem against Washington State, I think that Ware has something to offer the USC ground game. Let’s not forget Ware’s 100-yard game to open up the season (achieved on just 10 carries) against UNLV. Each of these three backs has something to offer. It’s just up to the coaching staff to utilize the three-headed monster in the appropriate way.

3. Talk about the importance of getting a win in Tucson to continue the momentum into the bye week.

GP: After the way in which the Trojans lost on the road at Stanford and Texas it was important to get the win at home against Washington State to get some positive energy around the program again. But now comes Arizona, a team that took the Trojans down to the wire last year in the Coliseum and is leading the conference in rush offense this year. A Trojan victory means going into the bye week with a pair of victories in a row and a chance to regroup and address some of the issues facing the team. A loss would not only be damaging to any conference title game hopes but it would mean a bye week filled with critiques and questions directed at Clay Helton and staff.

GK: At this point in the season, you could argue that every game is important, but what makes this game extra important is that it’s a Pac-12 South game. The Trojans can’t drop a South Division game without putting themselves in some serious (fill in the expletive). From what I have seen, the Pac-12 North is by far that class of the two divisions, but one could argue that the emergence of Arizona State and Colorado presents some definite South challengers for the Men of Troy. The fact that both games against ASU and Colorado are at the Coliseum is a gridiron blessing. That being said, play a divisional game at Arizona and win and the momentum builds. A loss to the Wildcats and the upcoming games with ASU and Colorado really puts the Trojans in a place they don’t want to go. Either way, the bye is coming at a good time, although a bye after a win would provide the momentum for the upcoming Sun Devils and Buffaloes.

HT: When you lose two games early, every game going forward becomes a bowl game. So the offense has to continue to gain confidence scoring-wise, while the defense has to get back on track. Arizona presents a different challenge on the ground than Wazzu, but as a unit, the defense needs to come away feeling good about itself going into the bye week.

AV: USC’s thrilling victory over Washington State last week improved Clay Helton’s record in the Coliseum as head coach to an admittedly very impressive mark of 18-0. The Trojans currently boast the second-longest active home winning streak in the nation, only trailing Alabama (21). USC’s last loss at the Coliseum came against Washington on Oct. 8, 2015. However, Helton’s record on the road as USC’s full-time head coach currently stands at 7-9. That’s just not getting it done for those around the Trojan football program. Clay needs his team to take this one out in the desert this weekend. Also, if we’re looking that far down the line already, a win this weekend against the Wildcats essentially puts the Trojans in the driver’s seat of the Pac-12 South Division (not that USC fans are at all enthused about another one of those “let’s win the South”-type of seasons).