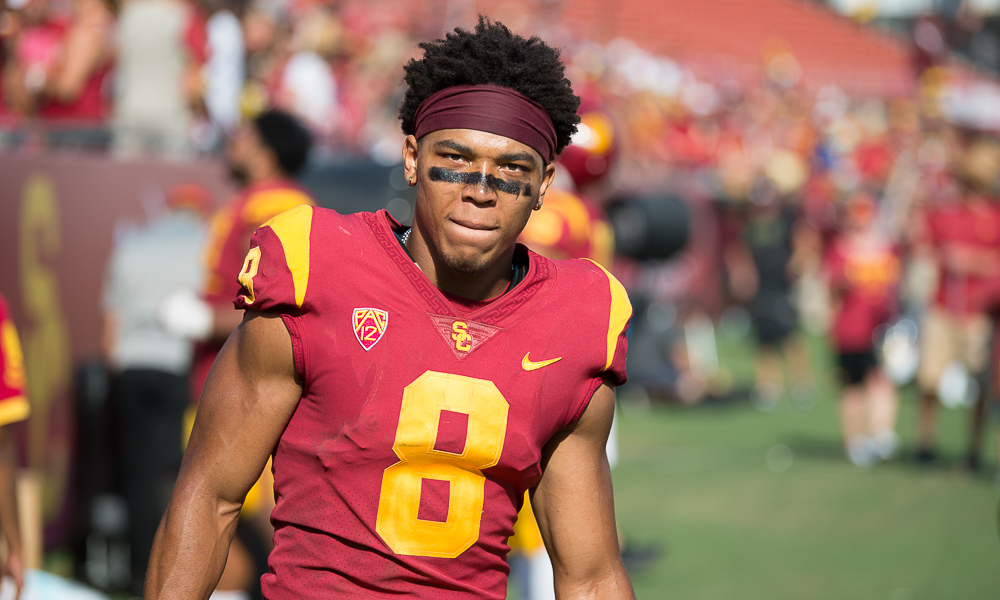 1. What’s going to be the biggest key for the Trojans to bounce back from two road losses as they get back to the Coliseum on Friday against WSU?

Garry Paskwietz: Finding and maintaining an offensive rhythm that results in putting the ball in the end zone. The start of the Texas game was beautiful with two rushing touchdowns on the first three possessions, and another drive down inside the five-yard line. Unfortunately that’s where things stalled and never got back on track. If this team is going to have any success against the Cougars, and the rest of the schedule, it’s going to have to get these struggles under control as there is too much talent on the offensive side of the ball for it to continue.

Greg Katz: I think after back-to-back losses in games that weren’t close, it’s time for the team captains and other leaders to do an attitude adjustment and speak to the team on what it means to be a Trojan. Certainly, there is a whole host of issues on the team in all three phases of the game. However, the mental makeup of the team is being seriously challenged, and it’s up to the players to make sure nobody rolls over and packs it in. If you look at the 2018 Trojans’ sideline during a game, it is lifeless. It is sad to see as it “appears” that the “Spirit of Troy” and “Fight On” mantras are being seriously challenged. Although the players need to make a compact to “Fight On”, I think the adult leadership bears a large since of responsibility. The coaching staff is missing a voice like an Ed Orgeron. Helton and his coaching staff are nice guys and professionals for the most part but none would be considered a real vocal leader at least publicly. If the players can’t get motivated to play as Trojans, then it is the responsibility of the coaching staff to do it.

HelixTrojan: The biggest key for the Trojans to bounce back this Friday against Wazzu is to not lose confidence in each other. Many of the players and staff on this team have been through tough starts before (see 2016). And while they try and find the right formula to break out of a scoring slump, and various other breakdowns, they have to keep believing in one another. It is a long season, and the goals of winning the Pac 12 and going to a major bowl game are still on the table. Go get it!

Angel Viscarra: The Trojans will need to be able to sustain drives offensively, convert on third-down opportunities and win the time of possession battle this Friday. This is a game where USC crucially needs to prove to itself that it can be competent offensively — over the course of an entire game.

2. How would you handle the USC receiver rotation with the early emergence of Amon-Ra St. Brown?

GP: The old saying “numbers don’t lie” applies here because Amon-Ra has produced more than the other receivers on the USC roster in the areas of catches, yards, yards per catch and touchdown (not touchdowns). Any worry about J.T. Daniels locking in on St. Brown due to their familiarity is out the window because he is the one getting it done and it’s up to the other receivers to match that. I came into the season with a lot of confidence in Vaughns and Pittman to be the lead receivers as the veteran guys but now all bets are off in that regard and I’ve got no problem with Amon-Ra moving into the starting line-up.

GK: Honestly, Amon-Ra St. Brown should have started the season. He proved in practice that he was as good as advertised and as good as any of the returning receivers. I think he has proven that over and over again. He’s a pro. I would start Amon-Ra, Tyler Vaughns, and Michael Pittman. I really don’t care who catches the ball as long as the ball is caught; it’s something that has been a challenge for most of the USC receivers – tight ends included. Whatever rotation you want, Amon-Ra St. Brown should be near the very top of the rotation list. I don’t you will get much disagreement that St. Brown has been the most consistent of the receivers. Who cares if JT Daniels is looking for his favorite target if it works. That’s all that counts. I wouldn’t worry about hurting feelings.

HT: At this point, Amon-Ra St. Brown should be a starter due to his chemistry with young QB J.T. Daniels. It is apparent that Daniels looks for St. Brown as a primary receiver, although he needs to learn to scan the field and find other mis-matches or single-covered receivers in the patterns. I also like giving Trevon Sidney and Devon Williams more reps as well.

AV: Amon-Ra St. Brown needs to be at that starting slot position come kickoff against Washington State. His ability to make space for himself and make adjustments to JT’s passes in mid-air are not things you expect of a freshman wideout. While Velus Jones Jr. has made some impressive grabs early this season, it’s no secret that the chemistry between JT and St. Brown has carried over from Mater Dei.

3. Who will be the member of the secondary that will need to come up big against the Mike Leach offense in this game?

GP: One of the issues for the USC defense this year has been a lack of turnovers, and this would be a nice time for a couple interceptions while the Cougars are throwing the ball all over the yard. We’ve talked a lot since spring about the way Iman “Biggie” Marshall has stepped up his game as a senior and I’ll look to him to come up big by nabbing at least one, if not two, picks in this game. It would be an opportune time to show himself as a leader in the secondary by leading the way in this regard.

GK: At first glance, it would probably be both corner Iman Marshall and safety Marvell Tell lll, which I think they will come up big. However, no question in my mind that Leach will quickly test the new safety (CJ Pollard/Talanoa Hufanga) and Marshall’s opposite corner Greg Johnson. That being said, the player I really think needs to come up big is senior nickel back Ajene Harris, who is being challenged by opponent offensive coordinators. Harris has been somewhat inconsistent in pass defense and in tackling, and I think that Washington State head coach Mike Leach can see the question marks in the Trojans’ secondary. Since the Cougs are a passing team first, it won’t take long to target which player(s) Leach sees as the weak link.

HT: DB Ajene Harris will have to have a bounce back game against Wazzu this week. Harris had a rough game against Texas, one of the few in his career. As a good player and leader on the team, I expect Harris to come back strong against a Cougar offense that will give him plenty of chances in coverage, and tackling in space.

AV: Garry and I have consistently been mentioning one guy in this USC secondary the past couple of months: Marvell Tell III. Tell’s had some ups and downs through the first three games of this season, but Friday night could be a solid opportunity to flaunt his goods at safety. Tell can definitely bring the hammer in stopping the run game, but this week will certainly be a good test against a pass-happy Washington State team.