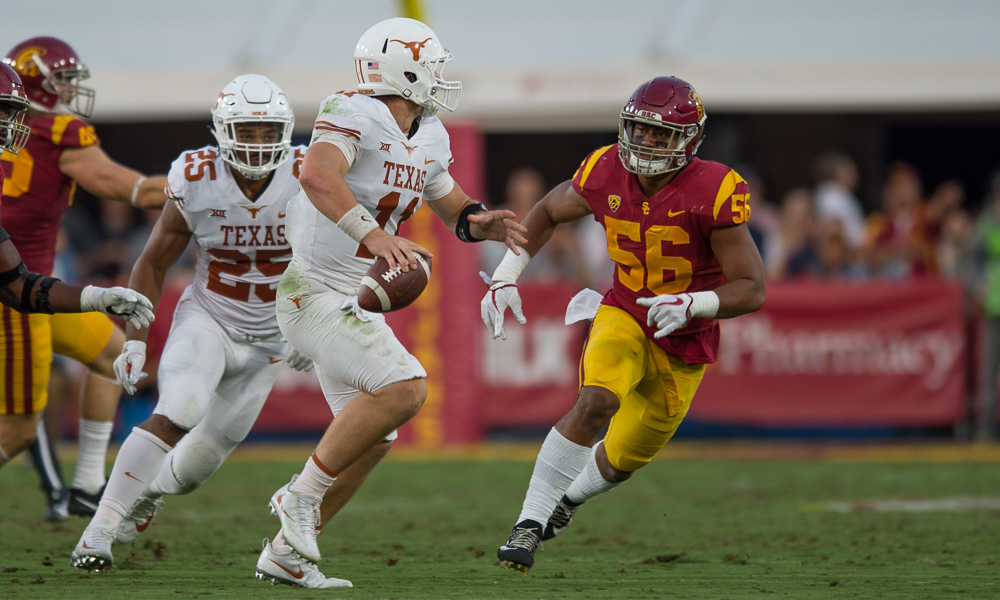 What do you see as the keys to victory against Arizona State?

One of the more surprising things last week was the way the Trojans showed up to play in a rivalry game like that. Riki Ellison said it well “there was no Fight in Fight On”. Playing the resurgent Sun Devils in a night game won’t be the same level as Notre Dame but it’s not going to be far off, especially with the winner of this game gaining an upper hand in the race for the Pac-12 South title. How the Trojans come out in terms of intensity and passion will play more of a bigger role for me than any helmet placement on an outside shoulder, but there are some things I would like to see, starting with making a commitment to the run game. I realize there hasn’t been a lot of success lately, personally I would like to see a fullback or more two-back sets (#29!) but I would be happy with anything that increases the number of touches by RoJo more than the 12 he had against the Irish. Helton said he would like to have him around 25 touches on Saturday, so would I, because I think the Sun Devil offense is going to put up some points on a banged up SC defense, so the Trojan offense will need to do their part as well.

No. 1, the Trojans need to avoid a post-Notre Dame-loss hangover by hitting the ground running this week in practice, turning their focus to a red-hot Arizona State team that will undoubtedly come out ready to pounce on them if their head isn’t in this game. No. 2, there needs to be a complete 180 when it comes to the play up front on both sides of the line, especially in terms of their physicality. This is particularly the case on defense, because for the second week in a row they’re going to be facing a potent rushing attack that is led not only by a pair of capable running backs, but, once again, a dual-threat quarterback in Manny Wilkins. And finally, the Trojans offense needs to take better care of the ball, particularly given the fact that they’re going up against an opportunistic ASU defense that forced four turnovers in their last game against Utah.

I hate to sound like a broken record, but, yes, you can bet that ASU will try and copy much of what Notre Dame did both on offense and defense, and that’s starting off by being more physical than the Trojans up front (duh). If the Trojans allow ASU this type of bully behavior, then they will be in deep at Sun Devils Stadium, which figures to be a sellout. The offensive line has to do better than it did against the Irish, but will they? If not, quarterback Sam Darnold will be running for his life and hurrying his passes. Conversely, the Trojans’ defense must pressure ASU quarterback Manny Wilkins or it will be an Irish redo. The Trojans secondary has to be at the top of its game and not give an inch to Wilkins with silly pass interference calls. And BTW, ASU is tops in the Pac-12 in the least amount of penalties called against them, and we know that the Trojans have the ability to ring up a lot of penalty yards if they don’t concentrate on each and every play. Lastly, let’s find out if there will be an Irish hangover, which could have an adverse effect on the Trojans early.

As mid-season games go, this game may be the most important contest of the season for the Trojans. Bouncing back from a blowout loss is never easy, but it is imperative against
a Pac 12 South opponent in the Arizona State Sun Devils. Here are my keys to the game:

1) Take care of the football – the Trojans have tallied (5) turnovers in its two losses on the road, and it has contributed to the team playing from behind in each game. It is a recipe that a team simply can’t expect to win with on the road.

2) Run the Football – despite the young players forced to play, USC must find the plays the offensive line blocks the best with and keep the Trojans in 3rd and short down and distances to take the pressure off of Sam Darnold and the passing game. If the Trojans can gain positive yards on the ground early in possessions, the play-action passing game will work against a Sun Devil pass defense ranked 11th in pass efficiency defense having given up (14) pass TDs.

3) Leadership – this game is where the Trojan veteran leaders must step up and provide confidence by making plays on the field, and encouraging players on the sideline.

1) play the game with intensity especially the defense
2) O-line has to improve
3) eliminate the negative plays on offense and specials
4) run the ball from a power set (two back and/or two TE)
5) get out fast as ASU in Tempe are very dangerous
6) watch for more playing time for Iosefa, Levi Jones, Jamel Cook on meaningful plays
7) if Gustin is back how will Rector be used?