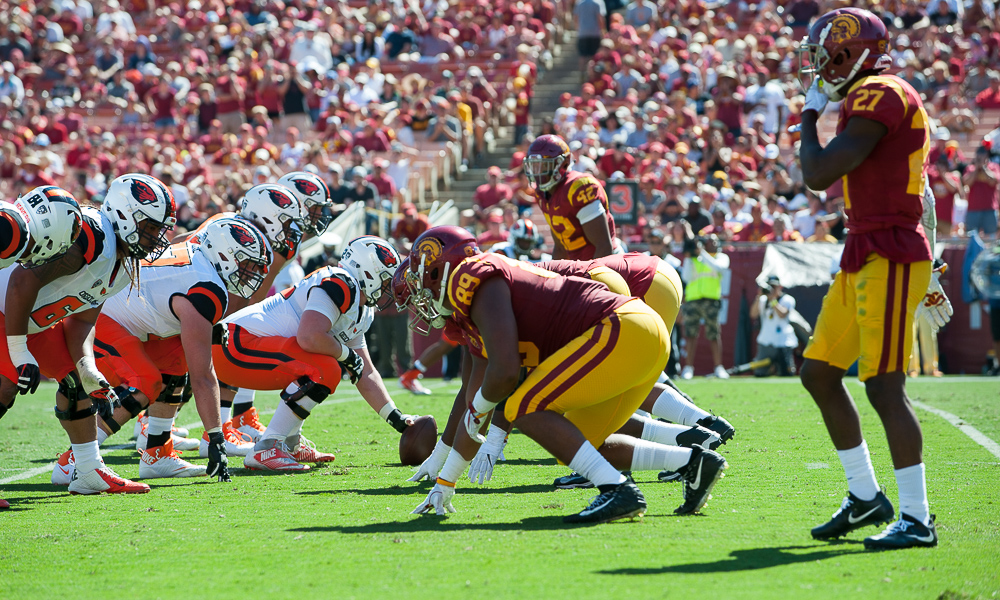 “What do you see as the keys to victory against Utah”

I think a commitment to the run game is going to be important for the Trojans in this game, and that starts with Ronald Jones and the offensive line. Last week we saw RoJo get 12 carries in the victory over Oregon State and there was definitely the feeling that there was much more in the tank if needed. It makes sense for the coaches to limit him somewhat in that game from a “wear-and-tear” perspective, especially with this game and the Irish coming up on the schedule, but now could be the time for a 25-carry type of day where RoJo shows why is deserves to be mentioned among the elite backs in the country. I would also have no problem seeing more of Aca’Cedric Ware and Vavae Malepeai if needed, and of course it would be good to get Stephen Carr back as well, although that is not encouraging news at the moment. With Ware and Vavae you have two backs who run hard and can help pound the Utes defense with a consistent push. And then it comes down to the o-line. Yes, there are injuries but the new guys have had a couple games to get their feet wet and now it’s time to go. If the Trojans can get the run game going in a similar fashion to what we saw against Stanford it would do so much to help Sam Darnold and the overall offense, hope we see it happen.

For one thing, the Trojans need to commit to establishing the run game, which in turn should take some pressure off of Sam Darnold, and ultimately lead to the passing game opening up. With Utah possessing one of the conference’s top rushing defenses, that is no easy task, but it isn’t impossible. Utah held Stanford’s Bryce Love in-check through three quarters last week, but the Cardinal stuck with him and the star tailback eventually finished with 152 yards on the ground. The Trojans, who should be able to get more out of Ronald Jones II this week, have given up on the run game too soon at times in 2017. Of course, to get the run game going they will need some physical play out of the offensive line – another vital key. And that goes for both sides of the ball. The Trojans need to come out and play with tremendous physicality against this Utah team.

Although this USC team is a bit banged up, they’ll still need to play their most physical game of the season. In terms of physicality, even though the Utes lost to Stanford last Saturday in a close one, they played on the same level physical playing field with the Cardinal. There has been some legitimate concern the Trojans don’t play physical enough on both sides of the ball, and beating Utah will take the guts, courage, and determination of a heavyweight fighter. One key will be defending the run-pass option no matter who starts are quarterback for the Utes. Another key will be the Trojans be able to run the ball against one of the best run defenses in the conference and the country? If the Trojans can’t run, they’d better have their passing shoes on and make sure they allow Sam Darnold time to unload. Speaking of Darnold, he can ill-afford to have passes intercepted in this game, and he figures to be pressured plenty. Sam will need to play his best game of the season for the Men of Troy to prevail. Let’s see if Trojans’ offensive coordinator Tee Martin calls for some more screens and draws, which work best against a physically attacking defense like the one Utah employs. Because of that Utah defensive front, you can expect that the Trojans O-line will be severely tested, and it won’t take long to figure out if the line is up to the task.

The drive for the Pacific 12 conference South division title for USC officially starts on Saturday against Utah. And here are my keys to this Important home game for the Trojans : 1) Win the Turnover Battle – QB Sam Darnold must protect the football in this game, eliminating the fumbles in the pocket and interceptions that have plagued the offense the last few games. 2) Make Utah QB Troy Williams have a bad day – Williams is only a 50% passer, and the Trojan defensive line must contain the So. Calif. native and make him uncomfortable in the pocket. 3) Run to set up the Pass – the Utah secondary is very good, #1 in the Pac 12 in pass defense efficiency. So the Trojans must get the Ute Safeties and LBs committed to stopping RB Ronald Jones and SC’s run game, BEFORE opening up the middle of the field with SC’s most effective passing routes – crossing patterns and drag routes over the middle.

Physical play​ along the LOS both offense & defense. Win the “War in the Box”
Particular attention to the O-line’s performance. Look for TE play and formation utilization. I would want to see an H-back added to our package with additional TE.
3rd and short what do we call first time it occurs (depends somewhat on field position)? Sam under center or pistol?
Specifically, can Nico Falah handle the 1 or 3 technique over him?
The backs will run hard but will the O-line win the one-on-ones and the LOS battle?
Others may be worried about Sam, I’m not. Protect him and he will deliver.

Win the “War in the Box” and defeat the point of attack run game and slow down the RPO QB keepers.
Watch #10 John Houston…what does he contribute? Physicality & intensity under scrutiny.
Biggie on weakside press coverage…how does he handle it? Penalties, interceptions, PBUs…keep count.
Marvell Tell will have a busy day. Watch Rector on QB RPO when quarterback keeps the ball. This is a mismatch speed-wise and Utah will try something against him and Housto is supposed to help him inside to outside. I think we’re vulnerable and that’s an area I would attack especially on 3rd downs in the first half.
Nwosu will eat up the QB on keepers so they will attack with power to his inside. Utah is smart (they are), they won’t test #42 with QB but with power in this way and try to seal off Fatu or Green.
Curious to see what Clancy dials up. He will toggle with loading the box (late) on 1st and and 2nd downs and pressure looks with CB coverage challenges on 3rd.
Utah will attack with Carrington on vertical and medium deep throws. Carrington has to be controlled.

Ajene as punt returner is of great interest. Let’s see what happens here.
Is Damon Johnson (#48) back in business as long snapper?

This is a defining game right here at home. Not just a must-win but a no kidding take-no-prisoners must win. Season defining. Yes, that important. I think we surprise Utah and pound them hard. They are susceptible to physical play with play-action. Watch for it.