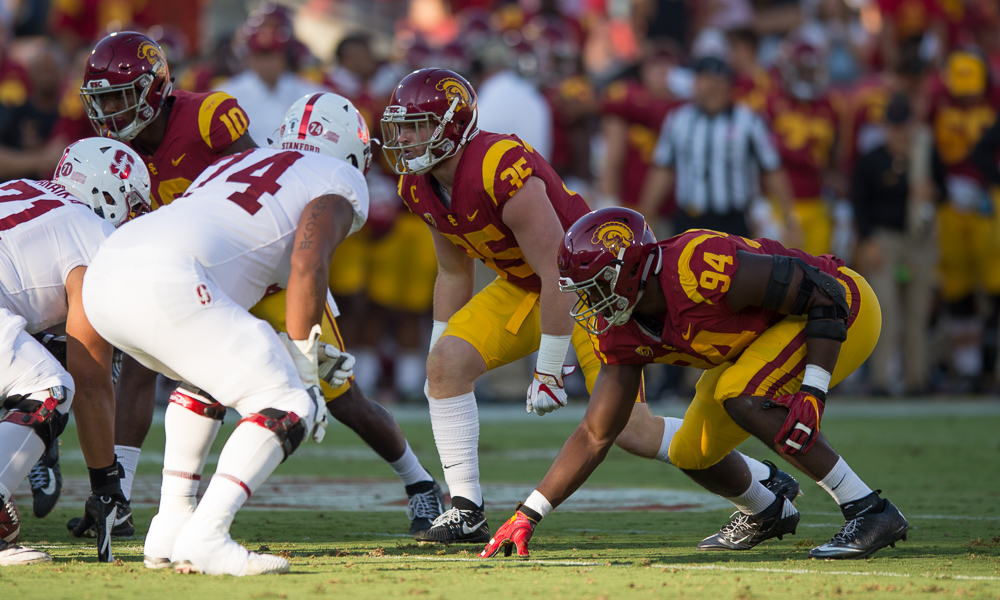 “What do you see as the key match-up for the Trojans this week against Texas?”

As much as I’m loving the momentum of the USC run game right now I actually think this is a game where Sam Darnold and the passing game can take center stage. The Texas defense is still a work-in-progress but the strength is in the front seven while the secondary has seen their share of problems. Holton Hill has been opportunistic at corner with a pair of pick-six interceptions but overall this is a group that would appear vulnerable to Deontay Burnett, Steven Mitchell and company, along with Ronald Jones and Stephen Carr sneaking out of the backfield, or a tight end down the seam.

The Texas rushing attack vs. the USC defense. I’m going to assume that the Trojans offense is going to pick up where it left off last weekend, so I think the key is going to be whether or not USC’s defense can keep Texas’ offense at bay. To do that, the Trojans are going to need to stifle a Longhorns ground attack that racked up over 400 yards last weekend. Chris Warren III rushed for 166 yards and two touchdowns on just 16 carries against San Jose State, and Kyle Porter compiled 72 yards and one touchdown on 16 carries. It was their production that really made all the difference in the world for the Longhorns. So, can USC’s defense repeat what they accomplished against Stanford? Will Clancy Pendergast’s group, once again, play a brand of defense marked by physicality? If the answer to those two questions is ‘yes’, then the Trojans should win handily.

One of the intriguing questions is whether the Trojans offensive line was that good last Saturday or was the Stanford defensive line not as formidable as past Cardinal lines? You could argue it was a combination of both, so a key match-up to me is the battle this weekend between the Texas defensive front and the Trojans O-line. Texas does have talent and is physical, but the Trojans’ offensive line gave indications that it, too, has become a physical group. One could also argue that an equal key to the game is the Texas O-line and the Trojans’ defensive front 7. That one could be interesting considering that Texas first-year head coach Tom Herman is a former OC for Urban Meyer at Ohio State, and the Longhorns’ offense is a sideline-to-sideline attack. The Texas offense will certainly test the Trojans front 7 with both the run and the pass. So, in summation, the key to Saturday’s big game will be the battle of the offensive and defensive fronts of both clubs, and the winners will have a huge say in the final outcome.

This long awaited game between USC and Texas finally gave me a reason to watch the Longhorn Network which I’ve avoided for years. The key match-up to me is USC’s Offensive Line Vs. Texas’ Defensive Line . . . in particular, Center Nico Falah vs. Nose Tackle Poona Ford. Excluding the mis-match game against San Jose State, the Texas defensive line struggled against the Maryland running game which racked up 263 yards. SC will experience similar success if Nico Falah can control Ford who plays the key nose tackle position in the Texas 3 – 4 base defensive scheme. The Trojan offensive line as a whole will also need to know where rush linebacker Malik Jefferson is at all times, as well.

I’m interested to see 1) O-line + RBs running the ball similar to the Stanford game. My guess is Texas will commit on 1st down to between the tackle run-stopping with safeties and maybe a special package. So can we inflict are will…again? 2) I want to see how we attack the LOS on defense and with which personnel. Situationally 1st and 2nd down look and then see the 3rd down call 3) Texas will run some Wildcat which we haven’t seen this year…will we prepared? Will we prepared for the inevitable Wildcat play fake pass downfield pass play that will follow from Jerrod? 4) Will we try a FG? Will we have to try a FG??  5) Sam’s game is coming up in my view.