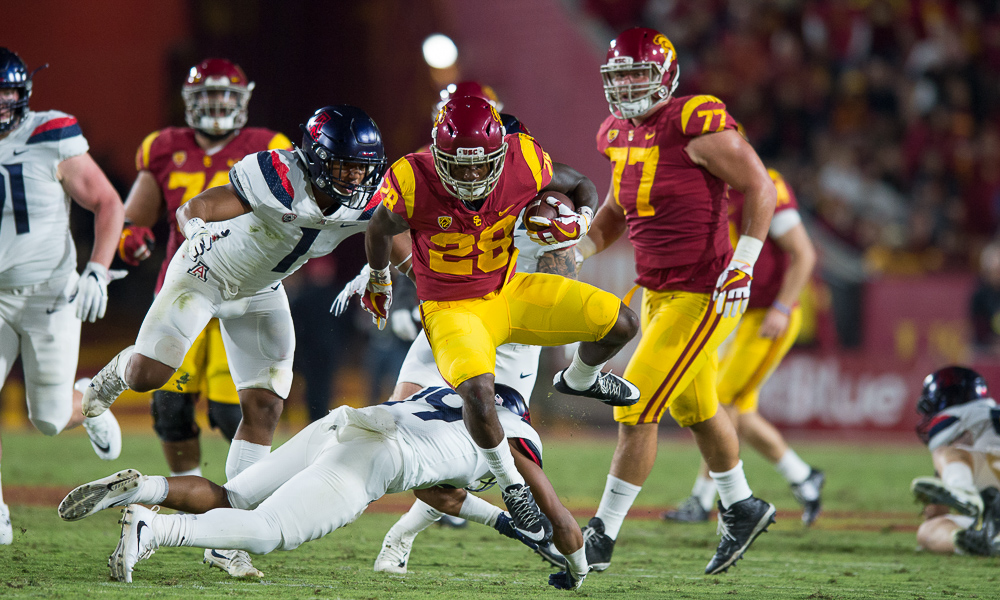 What is the key to beating Colorado and clinching a spot in the conference title game?

I would love to see the Trojans follow a lot of the offensive game plan that we’ve seen the last two weeks in terms of running the football. Last week there were twice as many runs (52) as passes (26), and in back-to-back games the Trojans have put up over 300 yards rushing. That’s not good news if you’re Colorado, who has one of the worst rush defenses in the country (#103). I really like what we’ve seen from the offensive line, particularly with guys like Chris Brown and Andrew Vorhees and the way they’ve progressed, and it seems like every USC tailback is producing when they are in the game. The return from injury of good blockers like Daniel Imatorbhebhe and Jalen Greene has also helped. If the Trojans can put up another 300-yard day on the ground it’s likely they will be in Santa Clara on December 1st.

On offense, the Trojans need to stick with what worked last weekend, and that was a potent rushing attack led by Ronald Jones II. The standout tailback carried the ball 27 times for 194 yards on Saturday, and Aca’Cedric Ware rushed for over 100 yards. On top of that, Stephen Carr could be ready for a greater workload this weekend. The Buffaloes rank second to last in the Pac-12 in rushing defense, so there’s no need for USC to get fancy in this one. On defense, USC needs to commit to shutting down Colorado tailback Phillip Lindsay. He’s averaging 133.4 yards per game on the ground, and he’s really been the only consistent performer on offense for the Buffs. The front seven needs to play physical and swarm to him, much like they did to Tate in the first half last weekend.

It will be Senior Recognition Day at Folsom Field, and it figures that Colorado, playing its last home game of the season, will be super focused to give the Trojans their best effort. The key for the Trojans is their preparation to play a focused game against a sure-to-be motivated Buffaloes team and not press knowing a win can clinch the Pac-12 South Division. With weather apparently not going to be a factor, it’s all about focus, staying disciplined on both sides of the ball, keeping emotions in check, so not to interfere with the ability to execute flawlessly. If the Trojans can do that, they should return to L.A. as Pac-12 South Division champs.

The Trojans enter Colorado with one goal in mind – clinch the Pac 12 – South Division title. To do that on the road, USC will have to take care of these three keys:

1) Cure the Red Zone Blues – it will be important to take the Colorado home crowd out of the game by scoring points early. And while the Trojans are last in the Pac 12 in red zone offense, they cannot afford to leave points on the board by not scoring TDs, and settling for field goals or no points at all on the road.

2) Stop Colorado RB Phillip Lindsay – one of the underrated players in the conference is Lindsay, who is 3rd in the Pac 12 averaging 133 rushing yards per game, and has scored (12) TDs on the season. Last year, the Trojans held Lindsay to just 57 yards on the ground. A similar defensive effort by USC is necessary on Saturday.

3) Win the Turnover Battle – after committing a rash of turnovers throughout October, the Trojans have only turned the ball over once in the last two games, and are (+4) in turnover margin. That trend must continue in this road game against Buffaloes.

1) Get focused and ratchet up the energy in practice and on Saturday. Colorado’s record is bad but they can play football. Don’t let them into the game
2) Get after QB Montez in the passing game. He’s an accurate thrower so it’ll take some pressure tactics to throw off his reads
3) Get our running game going early. I would love to see some two back sets but…When they stack the box with a safety down low, use the perimeter screens to weak side especially if they don’t adjust. Wait for a play action skinny post route for a big play later
4) Don’t forget the tight ends. Pushes the safeties back and open up running lanes.
5) Need to put the throttle down early
6) Hit RoJo, Ware and Carr in the flats, screens and wheel. It will always be a mis-match that nobody can equalize. Use it…
7) Develop and condition the younger players. We’ll need them now or later
8) Please manage the clock better
9) It’s Pac-12; manage to fewer penalties. Last week against Colorado ASU had one penalty (none on the defense). It can be done, so do it.