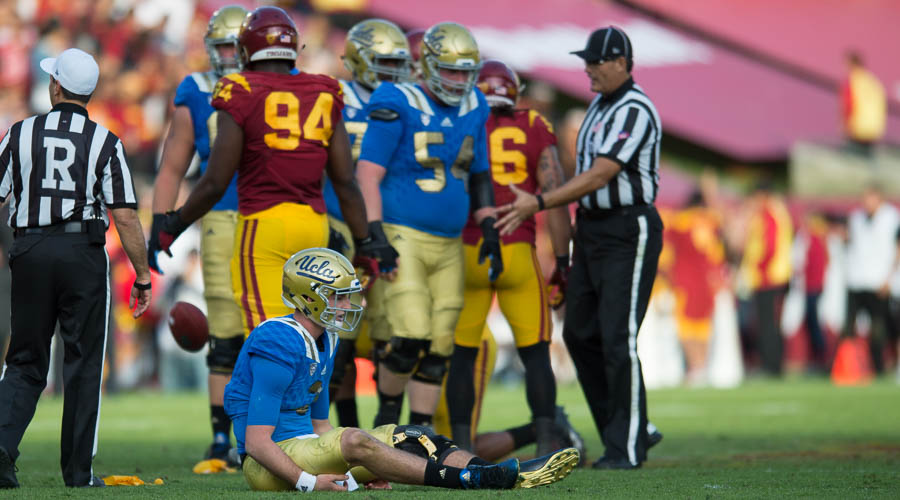 What will be the keys to victory against UCLA?

With the emotion of senior day and the excitement of a Coliseum crowd ready to embrace the team headed to the Pac-12 title game, it will be important for the Trojans to capture that energy and get off to a fast start. No need to stall offensively and let the Bruins stay in the game to give Josh Rosen a chance to get hot, it would be ideal for the Trojans to ride the run game early against a UCLA defense that simply hasn’t shown the ability to stop the run much this year. And then of course there is Sam Darnold, who has put together an impressive 6-game run that has coincided with growth along the USC offensive line and receiver group. It will also be important to pressure Rosen, who is far and away the best chance UCLA has of staying in the game.

On defense, the Trojans need to get after Josh Rosen early and often. The standout passer is obviously the Bruins’ biggest weapon, and he’s fully capable of making life miserable for Clancy Pendergast’s defensive group…but only if he has time in the pocket. He’s isn’t nearly as effective when he’s under pressure. Thankfully for Trojans fans, USC leads the Pac-12 in sacks (36), so there’s reason to believe that they have what it takes to get the job done here.

On offense, the key will be USC’s ground attack vs. UCLA’s rushing defense. UCLA ranks dead-last in the FBS in rushing defense, allowing over 300 yards per game on the ground. As such, the Trojans don’t need to get fancy on offense, they just need to commit to running the ball from the get-go, particularly with the way that Ronald Jones II has been racking up yards as of late.

Beating UCLA gets down to a couple of keys. First, the Trojans can’t turn the ball over and allow Bruins’ quarterback Josh Rosen more opportunities to test USC’s flag weary and inconsistent secondary, which would be greatly helped if the Trojans’ D-line can get to Rosen and physically introduce themselves repeatedly. Rosen has shown he doesn’t stand up well to being sacked. The second key is for the Trojans to not only run the ball – since UCLA’s run defense is Swiss cheese – but play with a high level of consistency for four quarters. It’s no secret that the Trojans play consistently inconsistent. If the Trojans allow the Bruins to be close in the fourth quarter, all bets are off.

It has been a long and winding road for the Trojans, but they have persevered and won the South division of the Pac 12. Now only one task remains in the regular season – win the war for Los Angeles. Here are my keys to beating the Bruins:

1) Pressure QB Josh Rosen – the talented passer for UCLA has put up a lot of numbers this season, but not when he is pressured. The Trojan defensive line has been really good at collapsing pockets and pursuing QBs. That must continue to make Rosen throw on the run and make poor decisions.

2) The Trojan running game – no team is as poor as the Bruins against the run, and the Trojan run game has been very good the second half of the season. The Trojans can pound UCLA right up middle with RoJo and company for big yards, and keep Rosen off the field for long stretches.

3) USC must start and finish fast – a couple of early scoring drives by the Trojans will put UCLA behind the 8 ball,and turn them into a one dimensional passing team. The USC defense can then turn the dogs loose. In addition, USC can’t take its foot off the gas pedal too early, as the Bruins can be a comeback team. A key to starting fast is limiting the early penalties and eliminating turnovers which stall offensive drives and give the opposition extra possessions.

1) Effectively pressure Rosen. Since he competes force him to throw a few bad passes and also run a few times so that the defense can apply physicality to their scheme. He will compete so force him to make some bad decisions.
2) Take away the pass on more than just 3rd down. UCLA struggles to run the ball so force uncomfortable throws on 2nd and 3rd downs. Good first down defense will create more and mounting pressure on Rosen.
3) We need to be productive offensively (points) 1st half and build a lead. Keep the pressure increasing.
4) UCLA defense is inexperienced so use more play action, different looks with TE & even two back sets. Force them to think and make calls pre-snap
5) In the red zone on 1 or 2 yard needs please use a power set. Opens up paly action and/or bootleg. UCLA’s defense is laterally fast so this has to be quick hitting.
6) If need be, Sam can run on these guys.