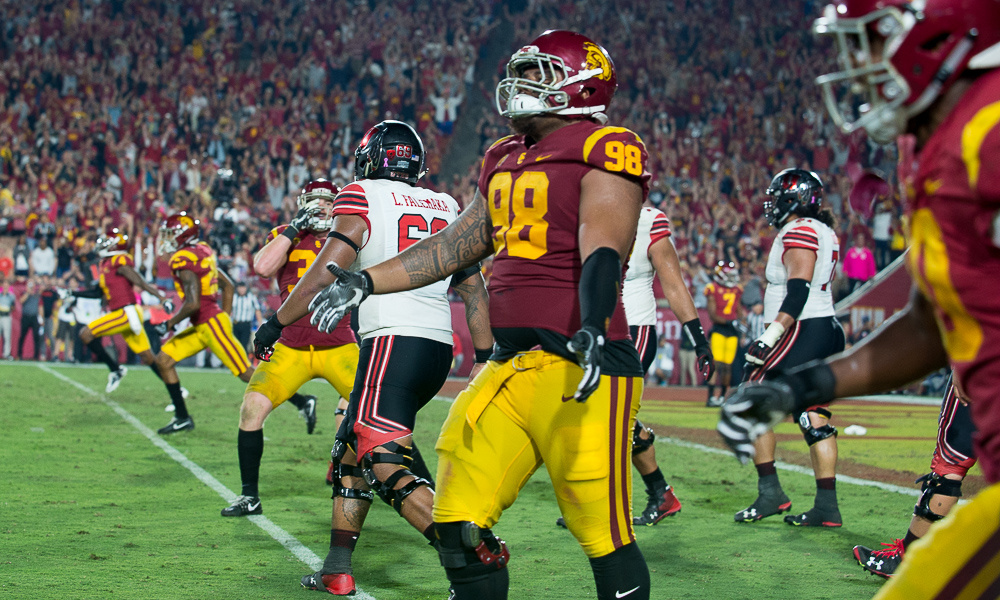 What is the key to victory against Arizona?

If the USC offense can bottle whatever it was that they found last week and continue it against Arizona it would go a long way toward coming away with the victory. For all of the issues with play calling, turnovers, penalties, etc that we saw in previous weeks, things all came together in this game and the Trojans looked sharp, in rhythm, balanced and controlled the line of scrimmage. The Wildcat defense has seen some extremes in recent weeks, from Colorado running for 300 yards to Washington State needing 84 attempts to pass for 602 yards, so there should be some good opportunities if the Trojans are on their game.

No. 1 – Stop Khalil Tate. The Arizona quarterback is a dangerous big-play threat, particularly on the ground, but he is also capable of dropping the deep ball on you through the air. The entire defense needs to play not only with physicality, but they also need to play disciplined football. Each player needs to stick to their assignment, and they need to get to Tate in a hurry. A lot of pressure will be placed on the outside linebackers – Uchenna Nwosu and – with Gustin and Rector sidelined – Jordan Iosefa. Perhaps most importantly, the entire unit also needs to wrap up when they tackle. They’ve missed way too many tackles in recent weeks, although they did show tremendous improvement in that regard this past weekend against Arizona State.

Obviously, the biggest key to victory is containing the running of Arizona sophomore quarterback Khalil Tate, the local product from Gardena Serra. The Trojans saw what Notre Dame’s quarterback Brandon Wimbush did to them with his legs, and you can bet that Arizona coach Rich Rodriguez has studied how ND attacked the Trojans on the ground and in the air. It should be fascinating how Trojans’ DC Clancy Pendergast elects to contain Tate.

1) The Trojan Front 7 on Defense needs to play Wildcat QB Khalil Tate like a running back – Tate may have 6 TDs passing, but he has 8 TDs rushing and averages 150+ ypg on the ground. Gap integrity by the Trojan defensive line and linebackers is a must against Tate, and an Arizona offensive line that should get more credit. The trick is to not just play a passive, containment strategy . . . but to be aggressive and disciplined in their assigned lanes.

2) SC’s Offense must play its own game – the common refrain may be ball control and to dominate time of possession by running the ball. But the fact is that Arizona cannot defend the passing game – they are dead last in the Pac 12. So SC must run its preferred balanced attack and score points against a porous Wildcat defense by establishing the run AND torching them with the pass with a Wide Receiver corp that is hot right now.

3) Surprise . . . the Trojan Offense must limit turnovers – well, this is not a surprise as it is a key every week for SC. Tate and the Wildcats are going to make some plays. But the Trojans cannot give them extra possessions with costly turnovers that take points off the board for SC, and give the Wildcats more chances to score in their big play ground game.

1) U of A is a finesse offensive attack but obviously very effective especially on the perimeter
2) Their RPO attack is right now and for all of October the best in the country
3) This is the time for fastest best defensive athletes on the field to defend Tate & Co.
4) Tate four weeks straight PAC-12 player of the week & U of A was FWAA’s team of the week last week
5) They are confident in offense, defense and specials…we got them right where we want them!
6) Offense needs to score and try to control the ball. U of A doesn’t need a lot of time to score or many plays but they need to be on offense.
7) We need to be up two scores in 4th quarter as U of A is a tough stop with go-ahead or tying score
8) No USC turnovers allowed or hidden yard losses on specials or thru penalty
9) Defense must play great assignment football and not create seams or wide open receivers. 3rd down defense will be challenging as we’ll want to keep plays in front and not get beat deep.

We need to play our best game this season to win. It’s very doable. Our defense is vulnerable but we have more going on than just a banged up defense.

What was the biggest turnaround you saw last week vs ASU from the Notre Dame game?

GP: The play on both sides of the line. Granted, the ASU lines are not the ND lines but they aren’t bad either, and the Trojans were certainly more effective both in stopping the Sun Devils run game and getting the SC run game going at the same time. I thought it was critical to get Josh Fatu back to help Brandon Pili on defense, and Andrew Vorhees really took a step up for a true freshman at right guard.

JC: The tackling by the defense reflected one major turnaround, but I’ll go with offensive ball security, because I think it might have been the biggest overall factor in the Trojans’ victory over Arizona State. The USC offense had been on a tear, and not in a good way, turning the ball over three times in three-straight contests leading up to last weekend’s win. In the USC victory, however, the Trojans turned the ball over just once, and that came on a Sam Darnold fumble on fourth down. If USC takes care of the ball like that again, the Trojans will be in good shape.

GK: The biggest turnaround I saw last week was the ability of the Trojans to stop making turnovers offensively. Because of that, the offense worked nearly as well as it has the entire season, both in the air and on the ground. Obviously, ASU was not Notre Dame, but given the stress this Trojans team was under following the devastating loss to the Irish, the team seemed to rally and really concentrate against the Sun Devils and didn’t make the mistakes they have been making in past games.