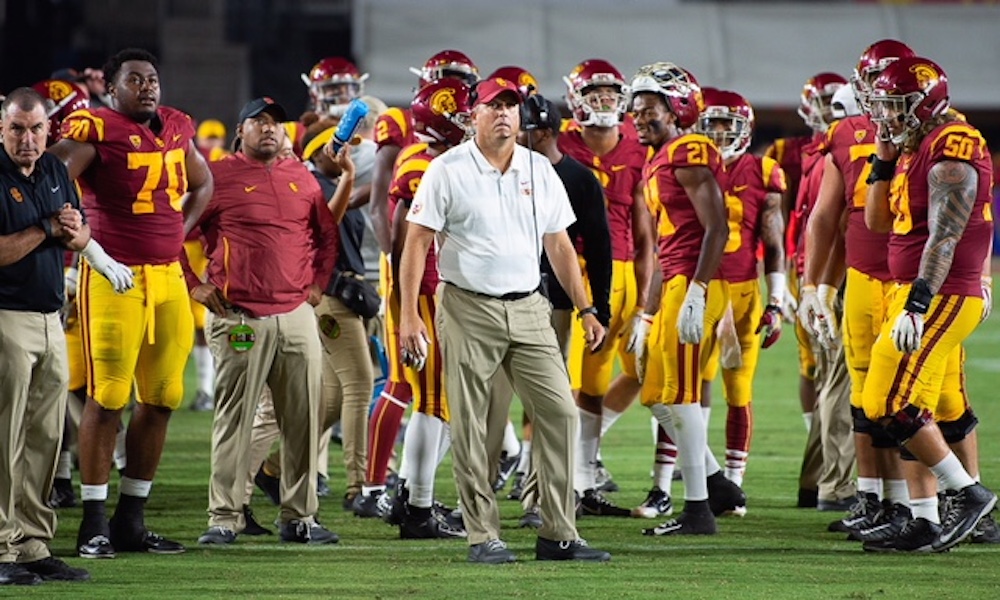 Give your thoughts on how these staff changes will impact things, if at all, over the last four games

It’s very interesting that these changes came on Monday less than 24 hours after Clay Helton had told his weekly media call that he would wait until after the season before evaluating all the elements of his program. We know that Helton met with Swann on Monday, so it’s reasonable to assume that Swann helped prod Helton to make some changes now. That’s fine with me, the Trojans are sitting at 4-4 and I I’m sure Swann is doing some evaluating of his own of the program and this is part of it. I do think there is a chance with the play calling for Helton to show a different path in the next four games. Whether or not that will happen, we don’t know, but most people reading this story believe that there is some production being left on the table with the USC offense and this is the chance for Helton to show that he knows how to bring that out. After all, he’s the one common link between all of the players on the Trojan offense, he recruited them, and he should know better than anyone how to properly develop them. If not, then it would add to the conversation wondering if he is the right coach for this team. If I could have one wish it would be more of a commitment to the run game as part of the weekly plan. As for what went wrong with Tee, it always felt like there were too many chefs in the play calling kitchen in recent years, and at least we will know where the buck stops for the rest of the year. With the move of Callaway to Drevno on the offensive line it again offers hope. For his lengthy resume things never really clicked between Callaway and the USC offensive line, and there were a lot of people who liked what Drevno did with the line last time around (2014). So now we see how much of an impact these moves can make. It’s not an ideal situation to be doing this at this point in the season and it shows that things are not closing strong. Swann went on the Trojans Live radio show last night and offered support for Helton, talked about the desire for stability in the program and listed many of the reasons why he thinks Clay is a good coach for the Trojans, but he didn’t say he would be back in 2019. How much of that depends on what happens in the next four weeks? Only Swann knows for sure, and he didn’t provide any answers.

Most Trojan fans would agree something had to change in the current state of the Trojans’ football program. The question really is: Can Clay Helton, now calling all the offensive plays instead of Tee Martin and Tim Drevno being the offensive line coach in place of the dismissed Neil Callaway, be an agent of change in the final four regular season games? Obviously, Trojans athletic director Lynn Swann has been aware of the current situation, and certainly Helton and Swann must have sat down prior to the staff reassignments, especially pertaining to the offensive line and a coaching dismissal. For Helton, who is trying desperately to fix his program immediately with a coaching reassignment and dismissal, assuming the play-calling responsibility puts new scrutiny upon the head coach. There’ll be no more rumors or innuendos whether Helton and/or Martin are calling the plays. Helton now clearly owns it – all of it. As for the beleaguered offensive line, how much can be done with a change in coaching with just four remaining weeks? Developing a new attitude or new culture along the O-line is not an overnight remedy. It actually starts in spring ball with a new philosophy, attitude, and a change in fundamentals. Can you become physical when in three seasons you haven’t? Dealing with assistant coaching issues or firings during the season is no longer unusual. Notre Dame head coach Brian Kelly has made changes last season, and the Irish were better off for it as this season would indicate. Is Clay Helton on the same coaching level as Clay Helton? Well, that’s a conversation for another day. One thing to pay close attention to is just who are the future starters along the offensive line with Drevno now in charge? Certainly, there could be player movement in the coming weeks. Lastly, you also have to wonder if Helton is now buying time or treading water, trying to appease Lynn Swann and the USC passionate fan base, and in the end, will his job be in seriously jeopardy if the Trojans don’t make it to a bowl game and/or lose to rival UCLA and/or Notre Dame? There’s a lot going on and probably more movement to come in the future. One thing for sure, the wheels of change are beginning to change as illustrated this week.

While it is difficult to change a culture during the middle of a season, sudden change can result in improved play if the objective is to return to basics and player confidence rises. Head coaches often break a season down into thirds, and so the effort put forward in the last third of this season (last 4 games) will be important to the remaining staff, players, and future recruits. I think the shake up in offensive staff responsibilities may focus play calling on the plays that the offense executes well, with a concentration on running the ball early in offensive series’ to put the team in convertible 3rd and short situations. I hope the changes ultimately creates an “us against the world” mentality that results in the team playing a full game, rather than the quarter and a half of decent football per game the team has fallen into the habit of playing this season.

Respectfully, these changes appear to be half-hearted measures. But I’m sure Coach Helton believes they are major shakeups. Not in my view or in the view of many. I professionally traffic in distressed business turnarounds which are usually very difficult and sometimes desperate situations. If there was ever a need for a wholesale turnaround, it’s the USC football program. Brand “USC” is in real trouble.

The Trojan family, former players, coaches and the well-informed fan will not buy these changes as substantive…because they’re not. These cautious moves change exactly what? Are the root cause issues of the collapse of what has been for generations a pre-eminent and dominant football program addressed in a meaningful way? Hardly.

Will Coach Drevno change the starting O-line? Maybe, I sure hope so. As there are only four games remaining on the schedule, how much coaching-up can we reasonably expect that leads to improved outcomes? Not much unless really the best players play on game day. Will we continue to start a RT that holds with impunity penalty after penalty and is a run blocking liability? Or a center that struggles, well, centering? And frankly, Drevno was coaching the backs and the run game before so he hasn’t been exactly unaccountable for the lack of run production. Tight ends are missing in action…where’s Kerry Colbert? Why is this so difficult to see?

Furthermore, what will Helton do differently as the play caller compared to Tee Martin? Just last week Coach Helton was reaffirming his confidence and support for Coach Martin. So, what changed? A sudden reassessment maybe? I find that hard to believe. Was there an “intervention”? Don’t know. What I do know is that unless and until the practices create the same urgency and intensity as a game day we will not succeed at turning this team or program around. And even that is no guarantee. Without a real commitment to a power football team to include power running and line of scrimmage dominance, we will not turn this failing program around. You want to have high energy practices and lots of fun? Then grind your opponent into the ground and enjoy the win. Because that’s exactly what he wants to do.

Also, none of these announced changes address any issues that plague our defense one bit and they need an intervention too. And while we are failing, we just see Pac-12 Championship and National title contention fade away…and our reputation.

The fact that our troubled swan-diving football program garners almost no national media attention is an indictment on many people at the University. But most definitely, this benign neglect underscores the point that if we don’t win nobody cares but us, and nobody is surprised about it but us.