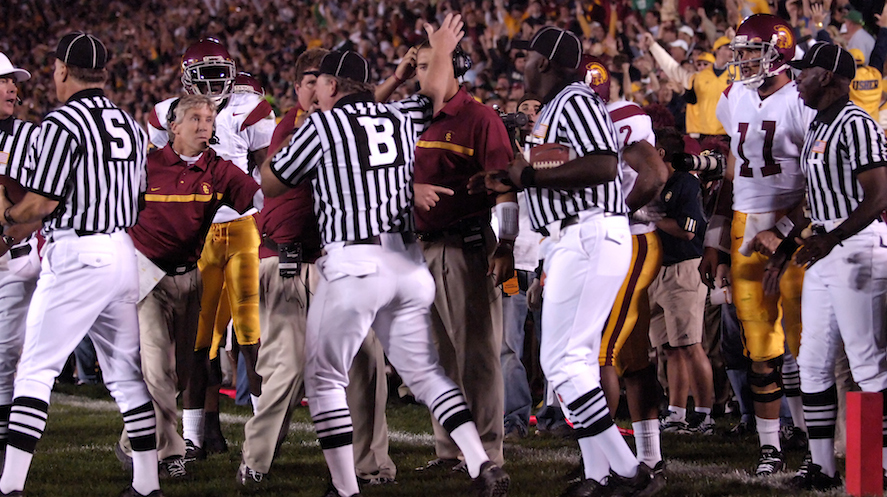 “What is the key to victory against Notre Dame?”

Bonus: Give one thing from SC-ND rivalry that stands out. It can be a play, a moment, a game, anything.

Turnovers. There’s no better example of how turnovers can impact the Trojan offense than the difference in the first half (3 turnovers) and the second half (no turnovers) of last week’s game against Utah. USC players and coaches insist that nothing special was said at halftime by the coaches, it was more a case of “clean up those mistakes and we’ll be fine” and that ended up being the case. Notre Dame is greatly improved in that area this year, they rank #7 in the nation with 14 turnovers for their defense, after only getting 14 all of last year. The biggest factor in not turning the ball over will start with Sam Darnold, and I think Sam is ready. When he talked after practice yesterday about playing in South Bend there was a real gleam in his eye as he recalled his first visit as a young fan to watch the Trojans play in Notre Dame Stadium, the memories clearly meant something to him. There is always talk about wondering if the current players have an understanding of the rivalry and the tradition, Sam Darnold does. He truly grew up an SC fan and he knows what this one means.

The key for USC is to come out and play physical football from the very first play, particularly up front on defense. Notre Dame possesses a prolific ground attack that averages 6.9 yards per carry – the No. 3 mark in the FBS. The Trojans need to commit to shutting down running back Josh Adams and the rest of the Irish ball carriers, and the way to do that is to out-physical the Notre Dame offensive line. On the other side of the ball, the Trojans offensive line has to come out and play with the aggression and physicality that they put on display in the fourth quarter last weekend, but right from the get-go this time around. If the Trojans can get Ronald Jones II rolling early, the passing game should open up.

Aside from obviously the Trojans being extremely physical on both sides of the line of scrimmage, especially defending the run, which won’t be easy since this Irish offense has gotten better and better with athletic sophomore quarterback Brandon Wimbush and junior running back Josh Adams, a future pro. I am still going to say the key to victory is the Trojans’ ability to handle the Notre Dame Stadium environment and mystique. Take into consideration that when Notre Dame is playing a huge home game – and the Trojans are at the top of the 2017 list – the stadium is both intimidating and almost mystical. Playing at night is almost a religious experience. Remember, that Trojans QB Sam Darnold has never played in Notre Dame Stadium and his inexperienced receivers will get the ultimate test. If ND gets up early, the stadium can be a very unforgiving place, and there is and will not be any team remaining on the Trojans road schedule that remotely comes close to what they’ll be experiencing on Saturday evening. Believe me, if the Men of Troy can maintain their poise – and it will be severely tested – they can win the game.

It has been awhile since the greatest cross-sectional rivalry in college football, USC versus Notre Dame, had college football playoff or possible national championship ramifications for both teams. But this year’s games represents just that for the Trojans and the Irish. The keys for a Trojan victory are these – 1) SC’s defense must control the Irish running game. It will be difficult with key personnel missing on the defensive line, such as NT Josh Fatu, but stopping RB Josh Adams and QB Brandon Wimbush is job #1. 2) SC’s offense must score the football. QB Sam Darnold and the offense must be efficient and score touchdowns, not field goals, to help take the Irish out of their game plan to run the ball, and make them pass the ball to keep up. 3) The Trojans need to protect the football on offense. SC got away with (3) early turnovers at home against Utah, but turnovers on the road will lead to a loss.

* Excellent 1st down defense. Hold the quick slants, hitch routes and various quick and bubble screens to a minimum. Force ND to run on 2nd down and long. This is a LOS (line of scrimmage) tactic. Most people would expect ND to pound the ball and, while true, they will early in the game try to allow their QB to make some simple 1st down throws to gain confidence and to slow down our front. So, dime and nickel package in the 1st quarter on 1st down. Counter-intuitive but I would plan for it.

* Make QB Brandon Wimbush uncomfortable reading the defense and throwing the ball. Make him default to running which he is much more comfortable doing. Make him one dimensional and devolve the game into a street fight on defense. Like to see Iosefa on the field at Will unless it is a dime package.

* Win turnover battle. This takes a tough defensive approach to stripping ball carriers and tight coverages and linemen with hands up. The offense needs to not turn the ball over…please. ​

* Biggie…let’s do it. Come on man! Play the way you can really play. ND is made for you as the receivers are not world class and we need your stout tackling too. Time to bring your A game. And Langley get ready to play some CB.

* Must control the cross (X) blocks inside and kickouts on the OLB/DE. Squeeze down the gap & keep outside arm free. You have to fight to do this right.

One USC vs ND moment that stands out

GP: I’m going to go with the 2005 game but it’s not the Bush Push or 4th and 9. The memory that always makes me smile is the Notre Dame fans coming onto the field after Leinart had fumbled the ball out of bounds (photo above) and the clock went to zero. They stormed down in premature celebration, only to be told to get back to their seats, and Leinart promptly went over the goal line for the victory. The stunned looks on their faces was priceless, as were the “1000-yard stares” as they exited the stadium.

JC: The Bush Push. Sure, it’s the easiest and most obvious choice, but it’s hard to think of a more lasting memory to come out of this series – in recent years at least. The vision of Reggie Bush making sure that Matt Leinart found his way into the end zone in South Bend, and the resulting celebration is undoubtedly forever etched in the mind of every Trojan and Fighting Irish fan alive today.

GK: Having attended the legendary 1974 “Comeback” game in the Coliseum when the Trojans roared back in the second half to defeat the Irish 55- 24 (yes, you can still smile broadly, Kevin Bruce), I thought nothing could top that. However, I have to admit, attending the 2005 “Bush Push” 34-31 Trojans’ late comeback victory in an insane Notre Dame Stadium ain’t far behind, especially given all that was on the line.

HT: My fondest memory of the USC – Notre Dame rivalry was traveling to the 2005 game and witnessing Reggie Bush’s great performance, the 4th and 9 play from Leinart to Jarrett, and of course, the Trojans scoring at the end of the game to win it. After the game, the stadium finally emptied after the Trojan band and fans’ celebration. I went down to the field intending to take a piece of the turf back to Los Angeles with me. But a security guard tried to run me off the premises. All I could do was bend down and kiss the stadium grass, and pay my respects to a great rivalry game and Trojan victory .

KB: As an 18 year old sophomore Coach McKay instructed us to make sure our helmets were on so the debris wouldn’t hit us on the head as we exited the locker room in South Bend. As we came thru the short tunnel​ I heard some guy quite a ways up screaming, cursing and carrying on though I could tell he was drunk by his slurred speech. As I was looking up and moving slowly toward the field and half heard then fully felt this guy puke all over my right shoulder, neck and arm. Seriously gross plus I smelled like a drunk for the first half. The trainers dosed me in water to get the flotsam off my white jersey but the damage was done. So welcome to South Bend and my first experience there. OR…
The next year in the Coliseum in the first half and we’re behind 24-0 and we are just stinking the place up. What I can see clearly to this very day is Mike Garrett prowling on the sideline (he was with the SDG Chargers then) loudly exhorting us to “play hard, we’re going to win this game. Just play hard and never quit.” We did play harder and better with a final score of 55 – 24. Great day to be a Trojan. I was exhausted, spent, happy and sore.