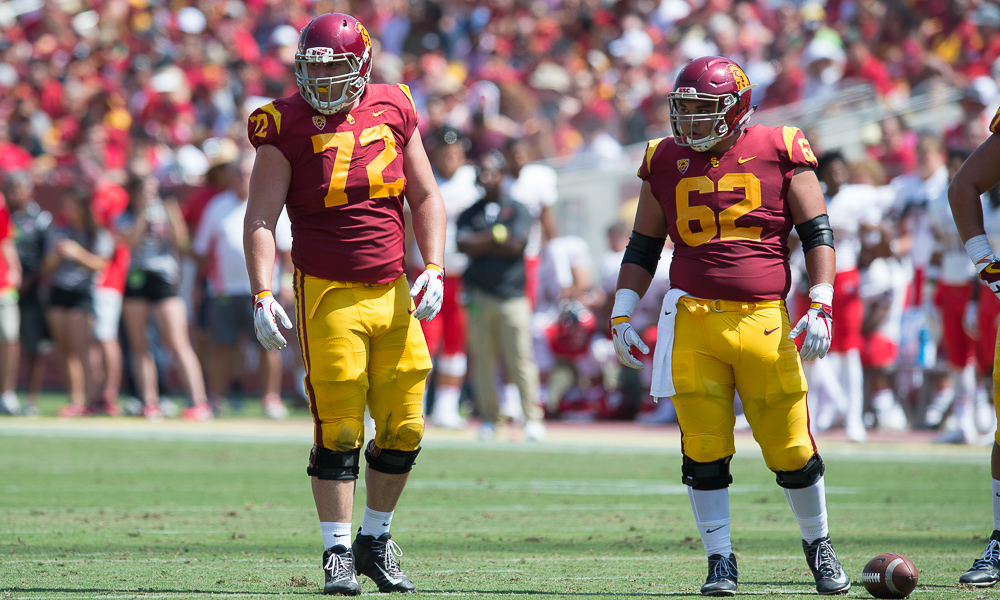 Q: When talking offensive schemes, is one really better than any other, or is it just about matching personnel to what that scheme is asking of it? SC’s decision to abandon the “Power” pro-style in favor of a wide-gap Air Raid, is this basically an admission that there’s no faith in the OL? Was it also a repudiation of Ellis’ lack of QB development to get JT where he needed to be to pick the correct option, quickly?”

I have a hard time with this change of direction. Not because of the “gimmicky” argument, but becuase we plucked many of these players from perennial SoCal powerhouses with the intention to run pro-style. Now we’re asking them to reduce their tools down to more basic tasks and relieving them of certain responsibilities (pass-pro for extended times). Will this hurt their NFL aspirations?

This wreaks of Les Miles desperation, grasping at anything to bolster offensive output and call it “progress”. Am I overthinking it? Too overemotional about days of yore?

A: I conservatively count six questions in there, so I’ll try to hit them all. As for one offensive scheme being better than another, it’s all about how you as a coach and your players can perform in the system. It’s a little bit like language. It doesn’t matter if I think Elvish is the best language. Since I can’t speak it, that’s not going to be a good one for me to try to use. Two teams can run the exact same offense and have wildly different results because of the different degrees to which the players and coach can communicate, understand, and physically carry out the plays.

As for abandoning the “Power” pro-style offense, I think it’s again something where the language sounds great, but not enough people could speak it. We’re still talking about the first Stanford game in 2017 being the benchmark for a recent USC “Power” offense, and outside of that it was mostly about not being able to convert third-and-shorts on the ground. But describing an offense in one word can be a little unfair as well. I think everyone would consider 47 carries for 346 yards and five touchdowns in a game to be the result of a “Power” offense, and that’s what North Texas did last year (against an admittedly outmatched opponent, but the ability to showcase that kind of offense is there with Harrell). I think there’s actually reason to be excited about the starters along the offensive line this year, and they’ll still be asked to run and pass block. Moving to the Air Raid doesn’t excuse them from performing at a high level.

Naming Bryan Ellis as quarterbacks coach to mentor a new starter (and what turned out to be a true freshman) was one of those decisions that just didn’t work out, and was a head scratcher at the time. I don’t think it’s fair to lump all the blame on Ellis, as true freshmen aren’t expected to look like three-year starters, and there have been admissions that the offense as a whole simply wasn’t running smoothly.

As far as changing offenses hurting USC players’ NFL aspirations, so many NFL teams run Air Raid schemes as part of their offenses that it definitely won’t hurt them. Guys are still asked to run, block, and catch, just like in any offense. Washington State offensive tackle Andre Dillard is being projected as a first or second round pick in the upcoming NFL Draft, and he played in a true Air Raid system.

I’m combining the last two questions. I do think there’s going to be a connection between USC fans and the Trojan offenses of the past that is going to be extremely difficult to sever until they see this new thing work. It’s tough to find a lot of people who speak that language, and what’s more important is that those people who do aren’t coaching USC right now. If Clay Helton is confident that moving to this system is the best way for USC’s offense to get some footing and make some noise, then I’m glad he’s gone all the way in by bringing in Harrell, rather than trying to slowly incorporate elements of it, where translations can get funky and nobody understands what’s being said.

Q: How many people work on USC’s recruiting staff? (Please Include marketing, advertising, any scouts, recruiters or anyone involved in the process).

How does this compare to other programs like Alabama or Oregon?

A: I don’t think it’s possible to know that exact number, because there are a number of interns not listed on the football staff roster, those kinds of jobs turn over so quickly, and there are people whose jobs straddle lines between some team stuff and some recruiting stuff. I do know that USC has made more of an effort recently to bulk up their staff, and at the same time, they still lag well behind the Alabamas of the world in sheer number of people. Lane Kiffin was quoted saying of his time at Alabama, “I was there three years, and I still didn’t learn everybody’s name in that building. There were so many people.”

There is a new Director of On-Campus Recruiting in Kelsea Winkle, who just came from Colorado State. In addition to her, there are three dedicated recruiting operations people, in Eric Ziskin, Gavin Morris, and Trey Johnson. Ryan Miller was hired in the spring of 2017 as Graphic Design and Creative Media Coordinator, and Drew Fox is listed in the coaching guide as Recruiting Graduate Assistant. Graduate Assistants also help out with recruiting, which is where I think recent players like Michael Hutchings, Viane Talamaivao, and Chris Hawkins could also be valuable.

Q: Is there any injury updates on Palo Mao and Hufanga? If I recall, both suffered shoulder injuries, correct?

A: Isaiah Pola-Mao underwent surgery for a dislocated shoulder in September. At the time, it was reported that it would be a six-month recovery, which would put him back in the middle of spring ball. Talanoa Hufanga suffered a broken collarbone in late October, which means he should be able to return for spring ball. But Clay Helton referred to multiple defensive backs undergoing offseason surgeries, though he didn’t name any names. We will certainly get updates on those players when spring ball begins, but Helton was up front about planning to be short on defensive backs and having to get creative in how they practiced with a full team because of those recovery times.

Q: Spring practice dates and times. Thanks and Fight On!!

Q: Erik, what are you hearing about the USC players that are listed on the Transfer Portal? Are the coaches working to try and convince them to stay? Have the changes in the coaching staff helped to sway the players looking to transfer, i.e. Trevon Sidney, Josh Imatorbhebhe, and Ykili Ross?

Also, any word on USC trying to pick-up anyone on the list?

A: There is obviously a spot for Ross in the secondary, and Sidney would seemingly fit well in this new offense, but at this point I would be surprised if they returned to the team. I do think USC will work hard to bring in a couple transfers or grad transfers and I think the portal nationwide could get even busier following spring ball and into summer, when more guys will have graduated, eligible as grad transfers, and have a sense of how spring ball has gone at their school and potential destination schools. No specific names so far, but adding some veteran experience along the offensive line and in the secondary seems like it would be a need for this roster.

Q: Despite the questionable performance last year and significant graduations, our offensive line has some talent. But getting the 5 best players on the field might require position switches, like Neilon or Dedich to OG. Any rumblings that Drevno would lean in that direction?

A: I wouldn’t rule anything out in terms of line movement, especially in the spring. I’d be surprised if Brett Neilon and Justin Dedich don’t get some cross training in at both guard spots, since Helton has talked before about making sure they do that with offensive linemen.

Q: What’s the latest on the search for a strength and conditioning coach/coordinator? Is Thump gonna be the guy or what? Spring ball is coming up fast.

A: Still no answer on a full time strength and conditioning coach. The one thing that has held true of every search Helton has conducted is that he has been thorough and taken his time with it. It wouldn’t surprise me at this point if Keith Belton winds up being the guy.

Q: Who wins QB job?Do either or both of the losers transfer? Has Young been promised the starting job coming in as a freshman like JT if JT fails to improve?

A: At this point I think JT Daniels is your 2019 starter—only because taking the incumbent is the safer pick (for me, not the coaches). I think Fink is the more likely transfer candidate, simply because he could be eligible immediately. I’d be really surprised if Sears left just to sit out somewhere else for his transfer season, especially since he’s already seen that there’s potential playing time as a backup. I don’t believe Young has been promised anything in terms of becoming a true freshman starter.