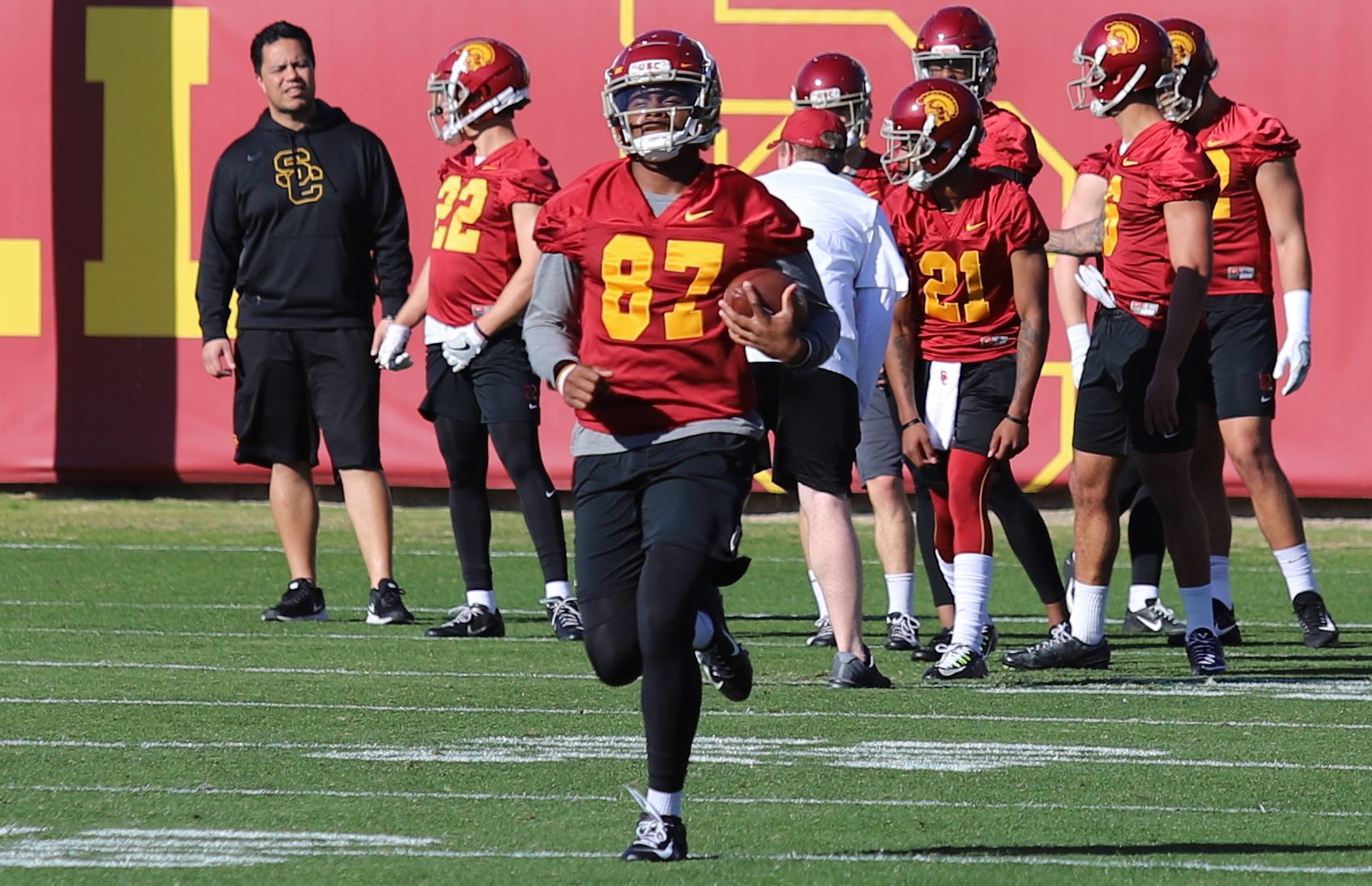 Erik McKinney answers reader questions following the first week of spring ball, about topics ranging from the Transfer Portal, to position changes, to positions of strength.

Q: What are the chances of either Trevon Sidney or Velus returning to play for USC? I believe a university can revoke a scholarship if a player enters the portal. Do you know if USC has done that for any of the players who have entered the transfer portal?

A: I think it spoke volumes that both Velus Jones and Greg Johnson were still listed on the spring roster after entering the transfer portal, whereas guys like Sidney, Josh Imatorbhebhe, Wole Betiku, and Ykili Ross (all players who have entered the portal and not chosen transfer destinations) were not. And that is taking into account the fact that Johnson and Jones made their decisions very close to when the roster was released. We’ve already seen Johnson come back to the team and there are rumblings that Jones is still a possibility. At this point, I’d be surprised if anybody else comes back.

Q: Is Tim Drevno still the “Run Game Coordinator” or has this been passed to the new RB coach? Or maybe this is no longer needed in the Air Raid offense.

Q: Do you consider it a good omen that Brett Neilon put on a snapping clinic on day one?

A: As far as I’ve seen, both Neilon and Dedich have been perfect with their snaps. I can’t recall a bad snap from either. It’s definitely a good start, since getting the ball out quickly in this offense will be greatly helped by good snaps.

Q: Can you give an evaluation of WR John Jackson? Since he didn’t enter with the rest of the recruits there has been almost no information on what he brings to the table, his potential to play early, and how he’ll fit into the new Air Raid offense.

A: I don’t think John Jackson III (photo above) has the physical and athletic gifts of incoming wide receivers Kyle Ford or Drake London, but Jackson is plenty big enough at 6-foot-2, 200 pounds. Maybe there’s a little bit of Chris McFoy in him. He’s shown solid hands and enough speed and agility. I think his best trait is going to be his reliability. In this offense, if you know where to go and can simply catch the ball, you’re going to be an asset. And not only can Jackson do that, but he’s going to have an advantage of taking a ton of reps this spring.

Q: Since you are at every past practices and post reports can you assess or give any knowledge on why these kids want to transfer? My nephew is on the team and he isn’t going anywhere because his degree is goal number one and understands that is a privilege to go to SC. He has mentioned that there are some that have become comfortable and are seeking transfers because they can’t adapt to change. This in regards to new coaches and system more less than what happened in 2018 in general. What are your thoughts from what you hear from around the team?

A: I think there are a couple of reasons for the transfers. One is that these guys have been here for a while and just haven’t played much. When that happens, you can stick around and hope it eventually clicks, or head elsewhere. Nobody really faults those guys for taking a look to see if they can get some playing time somewhere else. There is definitely a desire for a number of players to stay at USC until they can get their degree, but a lot of players (at every school) dream more about playing in the NFL than getting a degree, and the path to the NFL as a career backup is difficult.

Another reason is that I believe Clay Helton is treating this offseason as if USC hired a new head coach. There are new schemes on both sides and he has altered his approach to discipline and competition. Whenever a new coach or coaching style enters a program, players will transfer. Not everybody is going to buy in, and the portal makes it so easy for players to seek transfers.

And a third reason is simply that there was so much negativity being thrown at this program during the offseason, I think it had to be tough for some guys to block out the constant stream of noise that basically told them that staying at USC was going to be detrimental to their careers. It shows how powerful offseason chatter can be, when there are no on-field wins and losses, so a less-than-stellar recruiting class gets treated like a 40-point blowout.

My read now is that the start of spring ball has erased a lot of that negativity swirling around the program. So far, everyone is saying and doing the right things, and I think most guys are just happy to be back to being able to do something on the field.

Q: Hi Erik, do you think the defensive line is the strength of this team going into the new season? They seem to have the bodies, experience and depth but are they ready and improved in your eyes? Do they look bigger and in better shape?

A: If I’m just picking starters, I’m going to have a hard time picking any group over the wide receivers, from what I’ve seen so far. But I think the defensive line is the only group I’d consider taking over the receivers. Defensive line coach Chad Kauha’aha’a raved about this group following Thursday’s practice, saying that it reminds him of the group he had in Utah, which was filled with future NFL players. I think we’ve seen a step forward in performance and confidence from Brandon Pili this spring, and I think Drake Jackson has the kind of drive and talent to help push this entire group forward, even as a true freshman. I liked that Kauha’aha’a spoke at length about the specific things they need to go back and correct, and added that there is a ton of potential for this to be a great group. It made me believe that he knows what’s there, and more importantly, he knows how to fix some of the issues the group had last season.

Q: Considering how slim we are at WR, do you think Matt Fink would consider a move there if he isn’t close in the QB competition?

A: It’s an interesting thought. I honestly don’t know how well Matt Fink can catch. It seems like that would be a significant hurdle to that kind of transition. He’s certainly athletic though, and he would know the scheme and routes well enough where that aspect wouldn’t be much of a challenge. There is obviously a precedent in David Sills, but there is so much to learn in terms of the nuances and technical aspects of the position. That’s why what Sills has done is so impressive. I’d be surprised if that move was made and Fink made a significant contribution at receiver.

Q: I was under the impression that former linebacker Scott would weigh well over 230, how can he carry that weight at safety? Perhaps the staff saw this coming, and told him to get under 220?

A: Scott is listed at 6-foot-2, 230 pounds, but I’d guess he’s maybe a little south of both of those numbers. He does not look completely out of place with the safeties in terms of size, but he’s a middle linebacker being asked to cover wide receivers right now. I will say that he has noticeably improved every practice. My read is that this is more of an experiment to do with numbers than a permanent switch, but I think it’s going to ultimately benefit Scott in terms of position versatility.

Q: Erik, a different question looking back on the winter. Clay Helton has obviously had to change his approaches to coaching. To whom did he turn to get feedback and ideas? Many executives use a coach to help them in their process of development. Did Clay? Given that his situation was similar to Kelly’s at ND (I know there were big differences), did he approach Brian Kelly to see what he learned from a similar process? I think this is very important moving forward, because recognizing that you have problems is the first step to improving; if Clay didn’t go through this process, it doesn’t bode well for any significant improvement this season, no matter what assistant coach changes have been made. On the other hand, if he did get some “coaching,” then I am going to be very curous about how he might progress this year. We are banking on improvement across the coaching board.

A: Helton hasn’t said if he spoke with other coaches. What he has repeated many times is that he believes penalties, discipline, and turnovers led to losing games down the stretch last season, and that is what he is setting out to correct this year. I can’t imagine he didn’t at least talk to a few coaches during the offseason, since that’s a very regular occurrence. At this point, we’ve seen a definite shift in practice energy and time spent on different things, but Helton hasn’t said that it comes from anything other than his desire to focus on fixing those specific issues I mentioned, rather than bringing in a new philosophy from friends in his coaching community.