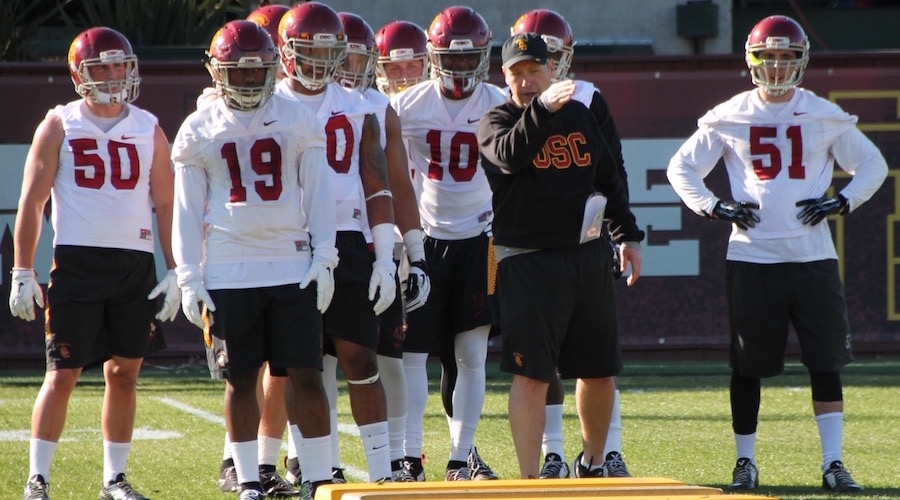 Here’s our weekly WeAreSC mailbag, which focuses this week on the opening day of Trojan spring ball drills.

Give us your early thoughts on how you think our defense looks and what is bringing to the table?

GP: One of the key elements of what Clancy (photo) likes to do is get pressure in the backfield, and I think the signs are there right now in terms of how the personnel is lining up. There’s no doubt an emphasis is going to be made at the defensive end position even though not all the available bodies lined up there on Tuesday. When you’re talking guys like Porter Gustin, Osa Masina, Jabari Ruffin, Uchenna Nwosu and Oluwole Betiku, there is a lot of potential in that group for spring. I’m particularly interested to see Masina lined up opposite Gustin at some point. And that’s not to mention others who could be there in the fall including Scott Felix, John Houston, Don Hill and Connor Murphy. I will add that I really liked the look of the interior starters yesterday in Green, Jefferson and Bigelow.

Is LM3 an impending grad transfer?

GP: I don’t think you can rule that out with the news that he will miss spring practices due to a class scheduling conflict. That’s just not something you hear too often in college football.

I would like to hear if you have a “wish” list for spring ball? Things you want to see or improvements you hope to see etc…

GP: At the top of the list is to watch the identity of the offense develop with the hope that it becomes the physical, run-first offense that Helton has said he wants it to be. I’ll also be watching the offensive line with Neil Callaway because of how important they will be to forming that identity. And I want to enjoy the QB battle because I think Max Browne is ready to shine at a very high level. On defense it’s all about the front 7 for me in spring, particularly that front line. And I can’t wait to watch how Kenechi works as a full-time coach.

Physically, what players seemed to make the most progress/improvement since the bowl game? I’m talking the eyeball test, not necessarily performance-wise.

GP: Kenny Bigelow. Daniel Imatorbhebhe. Chad Wheeler. Porter Gustin. Max Browne. Tyler Petite, Marvell Tell. Those are a few of the returning guys that jumped out to me. Of the new guys, Michael Pittman certainly looks the part of a big receiver who can also move.

Is there a different look to this offense so far in practice? Are we still primarily in the gun?

GP: It’s hard to really judge the look of the offense after only one day. Things were primarily out of the shotgun but Helton said he expects a 70/30 split of shotgun to under center ratio. Let’s revisit this in a couple weeks after we get a chance to see the offense in action a little more. One of the things I want to see is how they are going to incorporate some of the tight ends into a hybrid h-back role to cover some fullback duties.

Will Jake Olson get to short snap this season?

GP: We haven’t heard Helton specifically address Jake but seeing the type of person Helton is as a head coach I’m guessing he would be well aware of trying to get him in a game. Jake was at practice on Tuesday going through drills.

How involved has Coach Pendergast been with the players during practice?

GP: It was primarily an installation day so Clancy was very involved with on-field instruction.

Ced Ware: how is he doing? Will he have a role to play?

GP: Aca’Cedric was with the reserves, as Davis and Jones took the carries with the first unit. I see him as the primary candidate ahead of Dominic Davis for the #3 TB role, and there should be a decent amount of carries although Davis/Jones should get the majority. I still don’t understand why his redshirt year was burned for 12 carries that easily could have gone elsewhere. The good news for Ware is that his style of play should fit the identity Helton wants with the offense.

Excluding Coach Calloway and Coach Baxter – which Coach will make the biggest difference in their respective position group? And in a related topic, do you expect this group to be equal/better/much better in developing these players?

GP: I think it will be Kenechi Udeze. Chris Wilson was not well thought of by players and former players for his teaching of fundamentals, and I can see Udeze coming in and having a dramatic impact because of the emphasis he will place in that area. Not to mention the respect Udeze will command from the players, and the mentor he can be off the field.

Clearly we were a different defense last year when Cam Smith was injured and not on the field. What’s his status and will he get any reps this spring?

The spring media guide said he could be “limited” in spring drills while rehabbing from knee injury, and a shoulder issue. Cam did not do any drills on Tuesday.

Of last year’s red shirts, which players will have the most impact in 2016?

GP: I would put Ykili Ross at the top of that list. He had a real nice pass break-up on Tuesday, and he easily could have played last year if an early season injury hadn’t slowed him. Ykili is another really good option at safety and I think he’ll take advantage with Hawkins and McQuay missing spring drills.