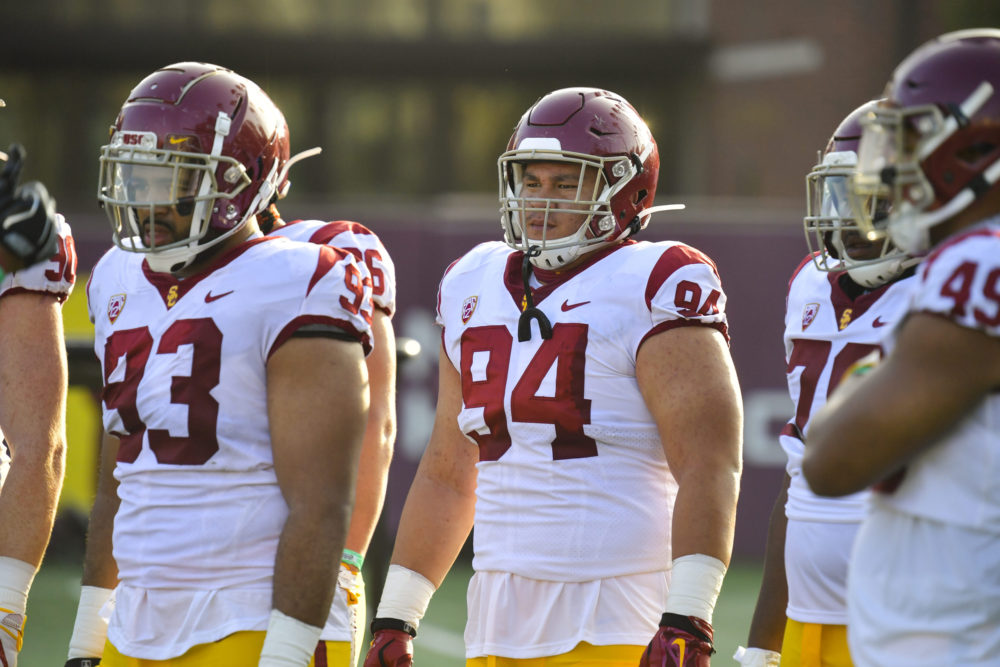 As USC kicks off game week ahead of the 2020 season opener, reader questions for this week’s mailbag dealt with finishing off the 2021 recruiting class, getting started on the 2022 class, whether USC has enough answers on the defensive line and coaches making adjustments through the 2020 season.

A: It definitely adds an interesting dynamic to the start of this 2020 season, but I don’t see it being something that derails the year or anything like that. Munir McClain is well-liked and well-respected, so I don’t want this to be taken the wrong way, but it would be a different situation if it was Kedon Slovis or Amon-Ra St. Brown or a potential team captain where it was affecting a team leader and major contributor. I think they all want McClain to get a fair shake, but the suspension was announced before fall camp began and there don’t seen to have been any issues regarding players giving full effort and getting ready for the 2020 season.

Q: I know practice and scrimmage reports are limited. The info coming from Helton’s weekly conference calls, too. Is it right to assume, the move of AVT, to LT, is going well? Talanoa, is another player I haven’t heard anything about? What about Drake London, McKenzie, and ITS? Is it “business as usual”, or are these players not making headline plays?

A: I don’t think there are many concerns about Alijah Vera-Tucker handling the left tackle spot at this point. Clay Helton had some glowing things to say about Talanoa Hufanga last last week, specifically in that this defense allows him to put his full array of skills on display, seemingly in a way that the previous defense didn’t. Drake London is going to be a huge piece of the USC offense this year and offensive coordinator Graham Harrell said that if the offensive unit is going to be as good as they think they can be this season, London is going to have to play a big part in that.

The coaches have said everything you’d want to hear about an offensive line that has a bunch of veterans on it. It sounds like Justin Dedich and Liam Douglass are performing well, but there aren’t guys legitimately pushing that first group, which includes Jalen McKenzie at right tackle. That can obviously be taken one of two ways — that McKenzie is performing well enough to make any potential challenge a non-starter, or that there isn’t a backup available to realistically challenge him.

Helton and Harrell have both said they like where the offensive line is at right now, but we’ll all find out this Saturday.

It seems as though Isaac Taylor-Stuart will settle in as the third cornerback behind Olaijah Griffin and Chris Steele. Donte Williams said he’s seen flashes from all the corners, but I’m interested to see what Taylor-Stuart looks like this season.

Q: What would your ideal scholarship numbers look like for USC with the style of offense and defense being ran?
Mine personally

A: Tough to argue with those numbers. The only change I’d suggest is in the defensive backfield. Sounds like USC is going to run with two cornerbacks and three safeties (one is the nickel corner from last year). Helton called it a “three spoke” safety look. So technically it’s probably a cornerback body, but he’d be listed as a safety on the roster. Still, I might take one of your running backs and one of your outside linebackers and put those scholarships in the defensive backfield.

As a comparison, here is what the roster looks like right now.

Q: Will SC be a player for Siaki Ika who is decommitting from LSU and is reportedly the brother of longtime SC commit Jay Toia?

A: I would imagine USC would try to jump into the recruiting race for defensive tackle Siaki Ika, who entered the transfer portal when he playing time decreased this season as LSU shifted to a new defense. The connection with Toia would seemingly help USC here (in addition to the fact that USC recruited him hard out of high school). But there will be some challenges, including BYU — Ika was a longtime Cougar commit before ultimately heading to LSU — Oregon and Utah. The Ducks and Utes also recruited Ika hard out of high school.

Q: Erik, how do you see the balance of the Recruiting Class turning out? It seems to be thought that we would have 27-28 spots available. How do you think they are filled?

A: Some good news could come this week, as four-star defensive end Aaron Armitage is set to announce his commitment and has USC among his finalists.

USC is at 22 commitments right now. So if I’m adding six recruits onto that group, I think USC adds Armitage and Josh Simmons along the defensive line, Korey Foreman at defensive end/outside linebacker, Ethan Calvert at inside linebacker, Ceyair Wright at cornerback and Alton McCaskill at running back.

I never like the idea of having to shuffle guys out of the class, but I’m keeping my eyes on guys like linebacker Raesjon Davis, quarterback Jaxson Dart, wide receivers Hal Presley and Joseph Manjack and defensive tackle Tywone Malone.

A: Graham Harrell talked about defenses adjusting to his offense and he brought up the Notre Dame game last season. USC’s first-half possessions went punt, punt, field goal (a 28-yard drive), punt, punt, punt, end of half. Its second-half drives went field goal, touchdown, touchdown, touchdown. Harrell pointed to that as an example of regrouping, making adjustments and finding success. It certainly could be argued that USC took too much time in making those adjustments, as USC lost the game. But the Trojans figured out what was going on and did eventually find success.

As for the defensive coaches this season, it’s still a guess at this point as we haven’t actually seen them have to figure out offenses or make adjustments. I think Orlando’s defense is one that can make adjustments from play to play because of how many different looks it can give offenses. I would be surprised if he’s stubborn enough to keep running something that is constantly being exploited.

Q: The biggest concern I have (Slovis staying healthy excepted of course) from a personnel standpoint is the middle of the defensive line. Do the Trojans have any big men besides Pili and Marlon T. for the interior DL? If so, who are they? Could you see an OL switching to DL? Thanks.

A: It’s a major question mark. USC has a sure thing in Marlon Tuipulotu, but almost nothing proven alongside him. Brandon Pili has shown flashes, but not the consistency you’d want in someone expected to step in and replace Jay Tufele. And then it’s a bunch of really young players behind them, in De’jon Benton, Stanley Ta’ufo’ou and true freshmen Jamar Sekona and Kobe Pepe. USC might be able to slide Caleb Tremblay, Connor Murphy or Nick Figueroa inside if that has to be the answer, but I don’t see it coming from a position switch at this point. I do think we’ll see more than a bit of a couple of those true freshmen this season.

Q: With the huge loss of revenue from both TV and the in-person experience this season do you see the administration changing its approach towards the value of having a highly successful football team (Rose Bowls and NC contention)? More specifically, even if it is merely to increase profitability, would the administration be willing to sign a high-priced head coach if he could increase the bottom line?

A: According to the recent USA Today list of head coaching salaries across college football, only 20 head coaches in the country make more than Clay Helton, so I’d say USC already has a fairly high-priced head coach. But I understand your question to be asking whether USC would go after someone in that Saban/Orgeron/Swinney market of $8-9 million annually. I do think the USC administration understands the value of having a successful football team and I think they’ve done a good job in fortifying the walls this past offseason — the recruiting support staff, the quality control analysts, the social media/graphics/video team and most importantly, the coaching staff. But when it comes to paying a head coach an astronomical amount, I’d argue that USC doesn’t need to start there.

Is Michigan getting $8 million worth of successful football from Jim Harbaugh? Is Texas A&M getting $7.5 million from Jimbo Fisher? I think it’s more about finding the right guy for the right situation or letting him create the right situation for himself. Saban and Swinney have separated themselves, but giving another coach that kind of money feels like a crapshoot at this point, when you might be better off spreading that around to other parts of the program. I think we’ve seen signs that the administration is serious about supporting the football program. It’s a first step and the hope certainly is that it continues when more, and more important, decisions are needed.

Q: Who is the next potential commit on the offensive and defensive sides of the ball? What do you think the final score would be this Saturday vs ASU? Thanks

A: As mentioned above, Aaron Armitage is scheduled to announce his commitment on Tuesday and USC is right in the mix for the four-star defensive end. I’ll go out and guess quarterback Jaxson Dart as the next offensive commitment. He’s a possibility to commit somewhere this month. There would obviously be plenty of intrigue with how the quarterback position would shake out if that were to happen.

As for the score this weekend, I could go against the grain and say something like 14-10 in a season where offenses have absolutely dominated. But I think the trend holds and both teams score points in the Coliseum. I think USC has too much offense even for a defensive-minded coaching staff like Arizona State. I’ll say 41-35 USC (but I also get to seriously claim 14-10 if it goes that way).

Q: Since USC and Notre Dame game is cancelled this year, is there a scenario where you can see the Trojans and Irish meeting in the Rose Bowl?

A: The Rose Bowl is a CFP semifinal game, so that would be the only way the two teams could play in the Rose Bowl. That would be really fun to see though. It would have been a disappointing season for USC to wind up in the Holiday Bowl, but it was scheduled to begin hosting a Pac-12 and ACC team this year, which might have allowed for a USC – Notre Dame meeting in San Diego. But the Holiday Bowl recently announced that it had canceled the 2020 game.

Q: With the 2021 recruiting class left with just a few finishing touches, how is the 2022 class outlook so far? Are we going to see the recruiting momentum continue if we do okay on the field?

But there is some momentum building for a truly great 2022 class and playing well this fall will play a big role in keeping that going. USC is after the best of the best in the 2022 class and that starts with five-star cornerback Domani Jackson (Santa Ana, Calif./Mater Dei).

This staff recruits incredibly well and prospects in the 2021, 2022 and 2023 classes have consistently mentioned how connected they feel to the USC staff. The commitments aren’t there yet in the 2022 class, but the relationships are building and USC will be in a good spot for a lot of talented players.