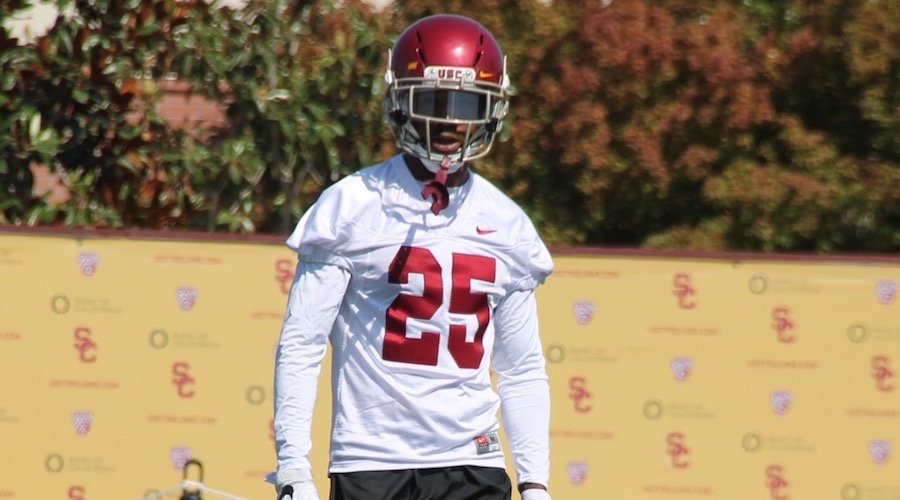 In this edition of the mailbag we look at early freshman impacts, thoughts on the secondary, the quiet confidence of this team and more:

Hello Garry, which freshman will have the biggest impact on the offense and on the defense?

I’ll say Stephen Carr on offense because he will just be too good to redshirt, he will get his touches. On defense, Marlon Tuipulotu has the advantage of having been here in spring and when you look at him now he looks like a veteran. If I had to give an under-the-radar guy for both sides of the ball I would say Erik Krommenhoek on offense and Levi Jones on defense.

Tyler vs Michael , who leads?

Through 10 days of camp I would say Tyler. He’s picked right back up where he left off in spring in terms of consistently catching the ball and making plays. Pittman has had some moments but I wouldn’t say he’s been as consistent so far.

Garry, which defensive linemen do you see earning consistent playing time other than Rasheem this year?

I’ll put Josh Fatu and Marlon Tuipulotu as the next two on that list since I see them as the co-starters right now at nose. Malik Dorton becomes the starter when we run a 3-man front. Christian Rector is a dependable option, and I certainly see Kenny Bigelow in that mix as well assuming he shakes the rust off and is ready to go. I think it’s too early to tell with Jay Tufele and Jacob Lichtenstein, and Liam Jimmons as well.

Hi Garry, This off season we saw reports that Sam was “retooling” his throwing mechanics. Have you noticed a difference in his mechanics since the beginning of fall camp?

It looks like he’s not bringing his arm back as far in his throwing motion, that part appears to have been tightened up a bit, but if you didn’t know to be looking for something you probably wouldn’t notice much difference.

Gary, Multi part question here. Should we be at all concerned that AL is starting to land some elite Poly recruits? Do you see this becoming a trend? Any idea if Solomon T might be giving his verbal anytime soon? Lastly, the more film I watch on Kana’i Mauga, the more I think he could be a real force for USC. Do you feel like his commitment will stick?

1) I think Alabama is one of the schools that’s a legit recruiting opponent for the Trojans whether it is Poly players or not. And while I certainly would have taken recruits such as Tua Tagavailoa and Cameron Latu, I’m feeing pretty good about where the Trojans stand with Viane Talamaivao, Marlon Tuipulotu, Jordan Iosefa, Jay Tufele, Vavae Malepeai, etc. 2) I haven’t heard anything about Solomon committing soon, although I do think he ends up a Trojan 3) Yes, I do think he will stick. And I like his game too.

Garry, Do you see Pili making the lineup against run heavy teams?

I wouldn’t rule that out. You can’t easily replicate 340 pounds, and that’s what Helton says Pili is coming in at these days. Our depth is actually pretty good in the interior so there are other options ahead of Brandon but I can see the coaches finding a time to use the particular skill set he brings to the table.

When does the recruiting dead period end?

It ends on August 31st. Here’s a link to the NCAA recruiting calendar

The blogger for the L.A. Daily News( I will not mention his name) has been implying in his columns that cornerback is a position of concern for USC in 2017, and that it could be a real weakness for the Trojan defense. What is your evaluation of the cornerback group we have? Thanks

I don’t share that level of concern. Don’t get me wrong, I realize you have to replace Adoree’ and that’s no easy task because he was so unique, but there should be enough to fill in. Biggie steps up as the lead guy, he’s entering his 3rd year as a starter and his game has matured to where I think he’s ready for that. Ajene Harris is in the slot and I’m very confident in him there. It will likely be Jackie Jones stepping in for Adoree’ and that’s the biggest difference right now, we’ll see if it rises to a level of concern when the games start because teams will certainly be throwing in his direction. There aren’t too many questions about Jackie’s physical skills, it’s more a question of his knowledge of the defense (and both Helton and Pendergast have praised his maturity in fall camp, a good sign). I like the reserves too with guys like Jamel Cook, Isaiah Langley and Ykili Ross, plus don’t be surprised if freshman Greg Johnson gets some time as well.

What do you think the running back depth chart will be by the end of the season?

I can see RoJo as the clear starter and Carr as the guy who is getting the 2nd most touches. That is absolutely no knock on either Ware or Vavae as I would have no problem with their roles increasing, it’s just that there are only so many reps to go around and I think Carr is that good.

One of the biggest challenges of the year is the lack of a bye week. How was this not avoidable? Seems the season is ending awfully early (Nov 18). When was the last time the season was over before Thanksgiving? How does the scheduling process work, and did SC request a bye somewhere in the schedule? Week 8 at @ ND (coming off a bye week) after a physical Utah game will be a tall order.

The schedule is put together by the conference and I agree that the lack of a bye week is a big challenge (I’m not sure when the last time it happened but it doesn’t happen often). The coaches are certainly paying attention to it and Helton has already talked about being proactive in terms of including more players in the rotation to help combat wear and tear.

Garry, I’m curious about the team’s attitude, and I mean “Winning Attitude.” Do these guys believe that they can beat anybody? The great Yogi once observed, “Ninety percent of this game is mental, the other half is physical.” In the Kiffin and Sark years sometimes I got the feeling they thought they were lucky to get out with a win. I want them KNOWING they’re going to win!

I am really liking the quiet confidence of this team. I look at it as the confidence of the prepared, these guys saw first-hand last year that what the coaches are teaching them will work to produce wins and to make them better, so there is a lot of buy-in. It also helps when you look around and see so much talent, including the best player in the country who sets the tone with his quiet confidence.

There was a lot of noise this spring with Jamel Cook finally healthy. His name hasn’t been mentioned much so far in Fall Camp. I was at the first practice where freshman WR Joseph Lewis caught a deep pass while being covered by Cook. Were fans overly optimistic of J. Cook? Do you think he is more suitable at the safety position now seeing him in Fall Camp?

I think Jamel is making steady progress, especially considering he’s basically at his 3rd position in the last year (safety, slot corner, outside corner). I like the coaches taking a look at him here because he’s a 6-3 athlete who has the potential to be a real weapon defending against opposing tall receivers, and from what we’ve seen so far I think he will be part of the corner rotation this year.

I find JT Daniels commit to be interesting considering that all of Helton’s previous QB commits have been more mobile QB’s. What say you Garry?

I think it’s a fair observation because I would not call JT a dual threat runner. He can move around in the pocket well so it’s not like he can’t move at all but he’s not the runner along the lines of Sam, Fink or Sears. I’m guessing the fact that he is an extremely accurate passer and has a very high football IQ were the traits that overrode any thoughts about mobility.