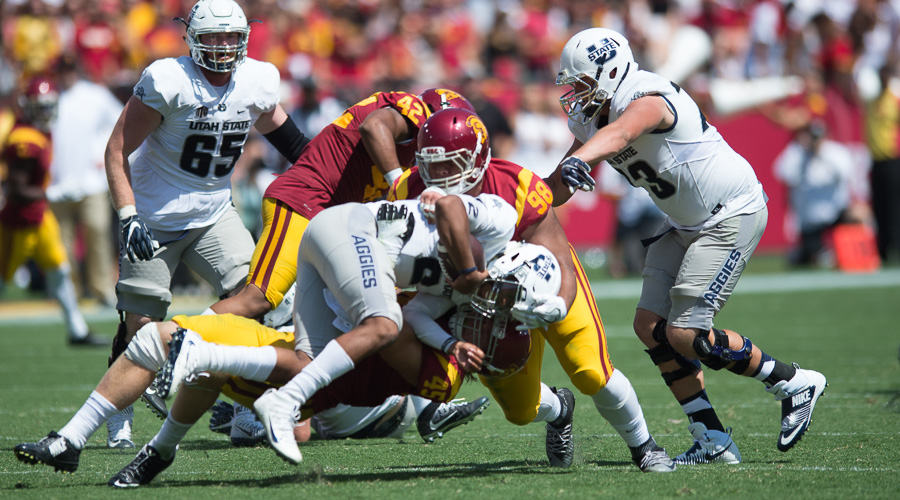 In this week’s edition of the mailbag we discuss the offensive game, going with the hot hand at running back, a lawsuit filed by Lamar Dawson and more.

My question is about Coach Helton’s vision: He has gone on record as saying his plan for SC is to be smash-mouth, run-first football. Yet he doesn’t seem to get that plan on the field. Do you have a feel for Helton’s plan?

I don’t think that vision has been put into play yet and there hasn’t really been a rhythm established yet with Helton and Tee Martin in terms of what they are trying to do. I do think the Utah game was the best-called game yet although you have to wonder how much of that was impacted by the play of Sam Darnold. It will be very interesting to see where the offensive plan goes from here now that Darnold is in place, and if they will stick with a running game that seemed to work so well last week with Justin Davis leading the way. I did like the addition of the unbalanced line last week, would like to see more of that in the future.

What are your views on the development of the DL?

One of the biggest surprises so far this year has been the fact that the Trojans haven’t been able to sustain much in the way of a pass rush. To only have 5 sacks through the first four games is not what was expected when Clancy came back because his defenses have usually been strong in that area. I don’t think it’s solely on the scheme though, at some point we need to see more from guys like Rasheem Green and Uchenna Nwosu. Thank goodness for Stevie T coming in, don’t know where we would be without him.

How spirited are the practices?

It was a different vibe this week in practice, things were more muted than normal and it was because the coaches wanted the players focusing more on what was being taught. The thinking is that there have been missed assignments and busted coverages that involve communication and the coaches want the players paying more attention in practice.

With Masina, Hill, Price, and maybe others no longer a part of the program will we get these scholarships back next year?

To be clear, Price is gone but Masina and Hill are under suspension and it’s still technically possible that they could return. But to answer the question, yes, the Trojans would get the Price scholarship back for the next class, and they would get back the Masina and Hill spots as well if they don’t return. Right now the Trojans don’t have enough available spots to offer a full 25 man class in 2017 so any scholarships that come open could be put to use for this class.

What do you think of former LB Lamar Dawson suing the NCAA and the Pac-12?

I thought it was interesting that he didn’t name USC in the case, only the Pac-12 and NCAA. Not sure of the reasons for that but I’m sure his lawyers did it on purpose. Obviously this isn’t the first time the issue has been raised about student-athletes and how they are classified in terms of employee rights, etc., and so far the courts have ruled in favor of the NCAA in the majority of cases. I don’t think it’s an issue that’s going to go away though, especially as schools continue to sign large apparel deals and television rights contracts. In this particular case, Lamar was focused on the extra time spent on football-related activities, much of which falls under the “voluntary” basis with the expectations to do the work, and I do think there is merit to that part of the case. But I also think it opens up a whole new can of worms if you go down that path and I don’t see any easy solutions.

Do you have any insight as to why JD had no 4th quarter carries despite being dominant in the first 3?

Yes, Helton has addressed it by saying the team had a planned rotation of the backs during the game, and that rotation was impacted by the fact that the Trojans only had three full possessions in the second half. Justin got the work in the first two possessions and then the third possession was scheduled to be the other backs. Helton said “we have as much confidence in Ronald Jones as we do in Justin Davis” and he added that if he had played Davis, he would have had people questioning why RoJo didn’t get a shot. I’ve been told that this issue has been discussed among the coaches and if a similar situation comes up in the future that they will go with the hot hand.