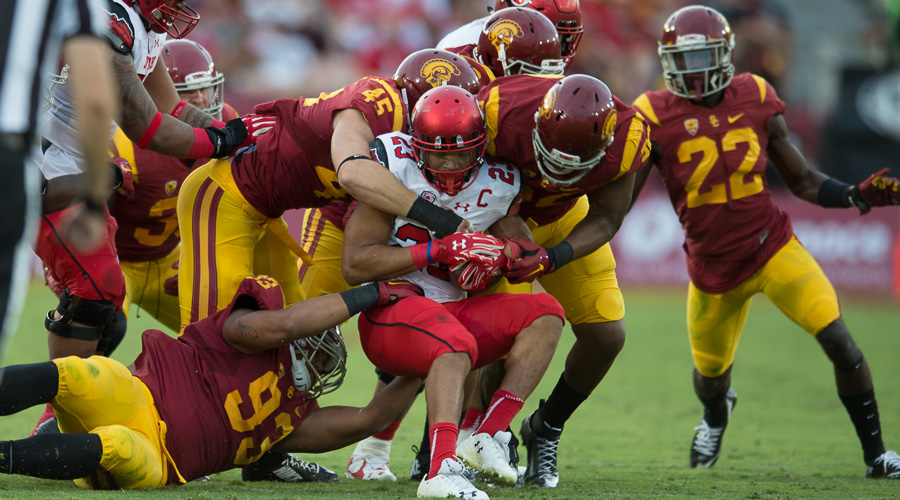 In this week’s edition of the mailbag we answer questions about the USC quarterback switch, the identity of the offense, Lynn Swann and the use (or non-use) of a fullback.

Do you think Max got a fair chance or a raw detail? I just watched the video of Helton’s presser on Monday and he said Sam will play the entire game and there are no plays for Max, yet when Max started, there were plays for Sam, the backup. If he was honest from the beginning and used a two QB system, that would have been a lot different than that what he is doing now. Plus Adoree will play some offense now so Sam will have an extra weapon that Max did not have. Do you think he indirectly setup Max to fail so he could use Sam, who he favored all along?

The primary thing I didn’t like about the switch was the timing and how it reflected on Max. I can sit here and list reasons why Max didn’t get a real shot to see things through, and why it’s certainly not fair to him. But it’s also a reality that college football can be a cold sport at times and it’s hard to watch when it happens to good kids like Max. Because while there are many other reasons for the struggles of the USC offense that go beyond Max, there is also the fact that I can understand why Clay Helton is making this move. It’s because of Sam Darnold. Sam has simply shown so many flashes on the practice field, and enough in his limited action so far, that Helton felt it was time to put him in. How much of that thinking was Helton indirectly favoring Sam all along or just being in a position where he felt this was a card he had to play, that’s a question only Helton could answer.

Garry: I guess whiskey tango foxtrot doesn’t count as a question!! So how about this; can we get the guys in a offensive huddle call the play before the clock runs down to 5 seconds, run a jumbo package put the QB under center and now run the football?? Running the football and eschewing (nice huh) the fundamentals of what works is so bloody frustrating.

Kevin, you know that is what I want to see too. It was great to see glimpses of it working last week (two tight end set to open the game) and so puzzling to go away from it, particularly in the third quarter after scoring on the opening drive. It just seems like that style of play fits the best with the personnel of this offense. Did you listen to Hogue and Lamb thoughts on huddling in the podcast this week? It’s at the 12:44 mark, I found it interesting to hear the two former OL say they were ok with the no-huddle and the reasons they gave for it.

When Lynn Swann goes to a practice, what is he there for? To show support? To evaluate the practice environment? To get some fresh air? It could be anyone or all of these things and more. Point is, I wonder sometimes (when it is noted that he is present) if there is anything more to it.

I would assume the part about evaluating the practice environment is part of the reason because that should be one of the things Lynn brings to the table is his experience with championship football teams. For the most part he stays by himself and watches the action.

What is the status of Noah Jefferson?

Helton addressed it after the Wednesday practice by saying Noah was dealing with personal issues that involved him being back in Las Vegas. There were no details given on the personal issues. Jefferson is expected back on Friday, according to Helton, but will not be at game against Utah that day. This comes after Noah has been dealing with a shoulder issue that has limited him as well.

GarryP; I’ll give you an easy and quick one – as always…

Is something wrong with Ruben Peters? We haven’t seen him and no touches. Or is it simply not in Mr. Martin’s repertoire to use the fullback in football games?

I don’t notice anything wrong with Peters, he’s gotten a little bit of action but certainly not a lot. Not sure how much of that is the coaches not wanting to use a fullback or Peters not being completely ready yet after just making the switch from linebacker. It’s one of many questions about the offense right now. As one former USC player said “it’s hard for me to reconcile your stated desire of having a power run game when you don’t use a fullback”.

When you have a short week, how much schematic or tactical stuff can you add or change on offense or defense? Would these be things that were practiced in spring ball or fall camp and then brought out as needed for the opponent, or would it be new stuff?

A lot of the basic scouting and planning is done of the off-season based on what a team has done before but the actual game week certainly involves the bulk of the work. To lose one day on a short week cuts back a little but it’s only one day so it shouldn’t impact things too much. The biggest variables this week are the fact that Utah has a new defensive coordinator so there are some new wrinkles there, and the fact of the Trojans making a quarterback switch. As Darrell Rideaux noted in a video we did earlier this week, something as big as a QB change is often done in a bye week to have more time to adjust, but that’s not the case for USC making the move to Darnold.

We keep hearing Helton talk about blown coverages and missed assignments in explaining the high number of “explosion” plays against the defense Is this something that’s extremely difficult to correct, since it still seems to persist? Is Clancy’s defense so complex our own players become confused? If so, do they need to simplify? Thanks.

No, I don’t think it’s a matter of being too complex. If anything, one of the traits you hear often about Clancy’s system is that it’s not as complex as others, which Helton has said allows players to play faster. The missed/busted assignments come down to on-field communication, which is something that should be able to get corrected.

Can you elaborate on the rumors of Edoga and EJ Price leaving the program.

Welcome Ed. The Price situation has been cleared up since you posted this, and the news unfortunately was not good as E.J. has left the program. I think this is a real blow since he was showing a ton of potential as a left tackle prospect. Chuma practiced this week so he is still here.

Has Lynn talked with CH & the team?

Lynn was at practice on Tuesday and was spotted talking with Helton afterwards. Don’t know if he has addressed the team or not.

Can you address the rumors of unhappy players (besides Max Browne) looking to possibly transfer out?

Yes, those rumors are out there and we’ve already seen one leave in Price. But to be honest, rumors about guys being frustrated and thinking about leaving are very common and they happen every year, and for the most part the player ends up staying. We’ll see what happens this year. I think some winning would go a long way to settling things down.

With Osa Massina long gone who will fill in for the backup role. Was is John Houston’s current role on the depth chart?

John Houston is backing up Cameron Smith, along with Quinton Powell, and I thought it was great to see John in there on a goal line series against Stanford. Helton mentioned yesterday the progress John is making now that he’s finally healthy after his back issues. Jordan Iosefa is the primary back-up to Michael Hutchings and he might be the biggest pleasant surprise so far in the freshman class.