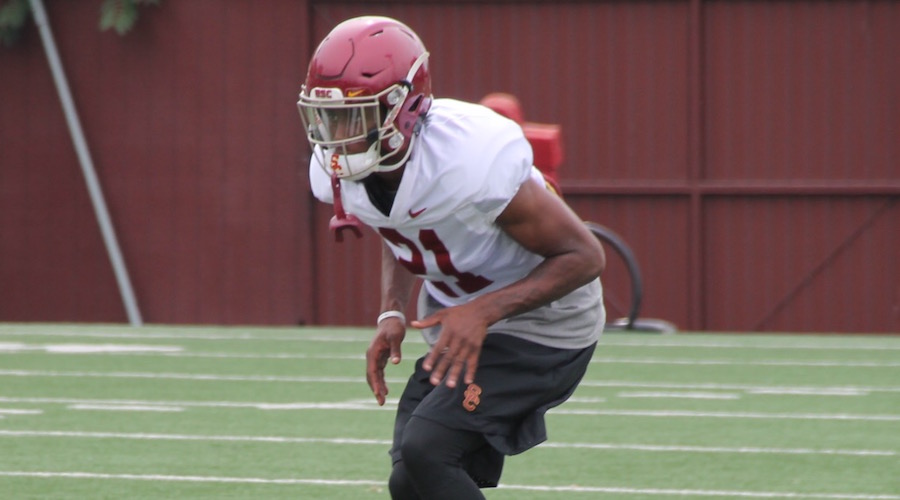 Who do you think will be the go to WRs to replace Juju and Rogers?

It sure is looking like Deontay Burnett will be that go-to guy. We’re seeing Deontay line up both inside and outside at various times and he certainly has that chemistry with Sam. Daniel Imatorbhebhe also figures to be a key guy once he gets back to full health. Of the younger guys, I would put Tyler Vaughns and Michael Pittman as good candidates.

Do you see S Carr as a consistent 3rd down back option given his catching ability? Maybe some wing looks with the 2nd back a speedy guy like Davis or Velus? I am of course assuming Carr has amazing blocking ability

Yes, I could see him in that role. Helton mentioned Stephen and Vavae Malepeai as showing good hands so far, and he also mentioned RoJo as showing improved hands. There was a lot of work done yesterday on throwing to the backs and Helton mentioned it’s something he wants to do more.

There are a lot of high risk games on this schedule. Is there one game that has that appearance of being to close to call?

Right now I’m going to say the Stanford game. The Cardinal have been a legit rival in recent years and that game will be a huge test so early in the season.

Now that JT Daniels is on board. Do we need to take a QB in this class?

I don’t think we NEED to but I think the coaches want to. I like the thought of taking a quarterback every year, we can get a really good one at USC every year and that’s one position you don’t want to get caught short at. Let’s say the coaches pass on taking one this year, and Sam decides to stay for the 2018 season, that would still leave us with only 3 QB’s on the roster in 2019 when JT arrives. Of course, if Sam stays for a 2019 season as well that would eliminate that issue but I would rather take one in 2018 and have an extra body in case someone decides to leave, injury, etc.

To me the single biggest talent level change from last season for any facet of the game will be the loss of Adoree Jackson’s big play ability, more on ST than defense or offense. How do some of the players being looked at compare for kick and punt return and what do each bring to the table (speed, moves, hands…)?

The first guy you have to look at is Jackie Jones. He brings the most similar skill set to Adoree’ in terms of speed and dynamic ability, and he is definitely in the mix to step in for Adoree’. To me the biggest key for Jackie is to gain that maturity with his game, and so far in the early stages of camp we’re seeing that. Helton talked yesterday about how Jackie has matured, how he has listened to the older guys after being in the program for a year, and he credited Jackie for listening. Another option could be Velus Jones with his speed, Jackie Jones said Velus is “blazing”.

How does Jamel Cook look at CB? Can he make a run at starting opposite I. Marshall?

After practice yesterday Clancy Pendergast called Jamel a “work-in-progress” and I think that’s an accurate description. Jamel was a safety last year, moved to slot corner in the spring and now is outside. That’s a lot of movement but the payoff is obvious if it can work. Jamel has the kind of length and wingspan to really cause a lot of problems for opposing receivers but right now he is still learning the footwork and techniques needed. He is lining up behind Iman these days (Jackie Jones and Isaiah Langley on the other side) but I’m not going to limit the possibilities of what Jamel can do in any way, we’re just going to have to wait and see how it plays out.

Malik Dorton started the bulk of our games last year as a DE but I rarely hear him mentioned in practice reports or as a potential impact player for us for the coming season. How has he been developing and what do you think his role will be in 2017. I’d assume that Green, Bigelow or Tuipolotu, and Dorton would be the starting DL heading into the season.

I think Malik has developed into a dependable option along the interior, and I’m fine with that. Is he ever going to be a star like Rasheem or Tuipulotu? Probably not. But he has added bulk and made the transition inside after being a defensive end in high school. We do see Malik in the starting line-up a lot when the Trojans go to a 5-man front, yesterday it was Nwosu, Green, Fatu, Dorton and Gustin as the starters for the first hitting team session of fall camp. But when we go to nickel package, which is most of the time, Dorton is the man out with the slot corner being added.

Any sights of blue shirts….if practicing already any comments?

Jalen McKenzie is here and working along the offensive line. Big boy.

Do you think Austin Jackson was getting a good look at LT? Thought he was with the 2nd team

Austin has been with the 2’s at left tackle quite a bit, especially when Toa is working at center and Clayton Johnston goes with the 1’s at LT. I think Austin’s future is as bright as any, I would compare his frame favorably to what Tyron Smith looked like coming out of high school, and that’s a nice place to start.

Here’s one that’s often been discussed on Pac 12 boards: If SEC teams can schedule two cupcakes every year without it damaging their poll ranking, why haven’t Pac 12 teams begun using the same formula? It seems a no brainer as Pac 12 teams would be guaranteed at least 20 more wins, thus higher rankings each year that would create the “appearance” of a stronger conference. SEC teams have worked the system successfully for decades and the sports writers don’t seem to care.

I wouldn’t say sportswriters don’t seem to care, it’s a pretty consistent talking point whenever the merits of the College Football Playoff are discussed. I do think eventually we’re going to have to find some equal ground on that issue, either everybody plays a 9-game conference schedule or everybody shifts to an 8-game one. I personally like the 9-game version but it’s just not apples to apples if some conferences only play 8 games, which basically allows for an extra “cupcake”.

How do you think not having a bye week will affect us, injury wise, fatigue, down week and overall in general?

It’s an issue, that’s for sure. I don’t really know where it might have an impact, maybe a key injury that would have healed with a bye week, or a tough stretch that would benefit from a mental break more than anything. I thought it was revealing at media day when Sam Darnold said he’s never played a season where he didn’t have a bye. It’s something the coaches and players are very aware of.

Which Freshman do you see as having a chance to win a starting job out of fall camp and why?

I’m happy to say it would surprise me if any freshmen win a starting job out of camp. Maybe I will say Levi Jones at WLB if John Houston doesn’t lock things down, but so far the coaches are talking positively about Houston and his ability to slide out in coverage when needed, they like his athleticism.

Why doesn’t SC do their own version of “Hard Knocks” or “Last Chance U”? I can’t imagine people at the film school haven’t thought of this … No offense to Liev Schreiber, you would be an excellent narrator, Garry.

I always thought that would be a natural addition with the regional Pac-12 Network channels. Shouldn’t each school be producing something like this? USC should for sure with all the amazing production resources available to the students. There was a lot of talk about it at Fox Sports West several years ago after the success of Trojan Rewind but then a Bruin got put in charge and the Rewind shows went away, as did the thought of the Hard Knocks-type show.

Is Clayton Johnston big enough to contribute? Will he?

Yes he’s big enough. Helton mentioned yesterday after practice that Clayton has put on about 20 pounds since last December, and he’s doing a solid job at left tackle. I don’t know if he’s ready to be the guy if needed or if he will get an opportunity, you’ve got Toa ahead of him and Austin Jackson behind him, and I think it’s only a matter of time before Jackson is a legitimate option. But I do give Clayton credit for working to put himself in this position.

Pulling and traps are run plays we haven’t seen much of. Any chance our abilities allow expanding our running game to include these.

Here’s a quote from Helton after practice yesterday talking about this topic: “One of the things that I think right now, when you look at a RoJo, when you look at the athleticism of this back, RoJo is a great outside zone runner, and it takes great athletes when you do run those outside perimeter zone plays whether it’s toss sweep or outside zone, so we’ll be having a lot of pulling in our schemes, a lot of things where guys have to be on the run, and so we’re looking for the 300-pound athletes. Right now, we have a good crop of them – a good, young crop of them.

Seems like at the beginning of Spring, Roy Hemsley had a prominent role going with the ones and twos at Left Tackle, but since then, he’s disappeared. Any explanation? And what happened to Chuma at LT? The reporting before spring and into spring said he really wanted that left tackle spot. But Helton’s comments in today’s practice report said he’s comfortable at RT. That’s a big change.

Roy was working primarily at right tackle in the spring (not left) in competition with Chris Brown, while Chuma was taking the majority of reps at left tackle. With Toa back (likely at left tackle), the coaches have moved Chuma back to right tackle, with Chris Brown and Roy Hemsley taking their competition to left guard, where Brown is currently the starter and Roy is #2. No specific reasons were given, other than the coaches looking to find the best combination of 5 guys.

With Daniel hurt how is Cary & Tyler stepping up, who leads?

Both guys had big plays in the last couple days. Cary went over Bubba Bolden to make a nice catch at the goal line, and Petite had a catch down the middle the other day. Tyler has bulked up in the upper body and looks good so far. I wouldn’t say either guy has gained any kind of “lead” with Daniel being limited. The freshman who has stood out so far is Krommenhoek, he’s making some plays.