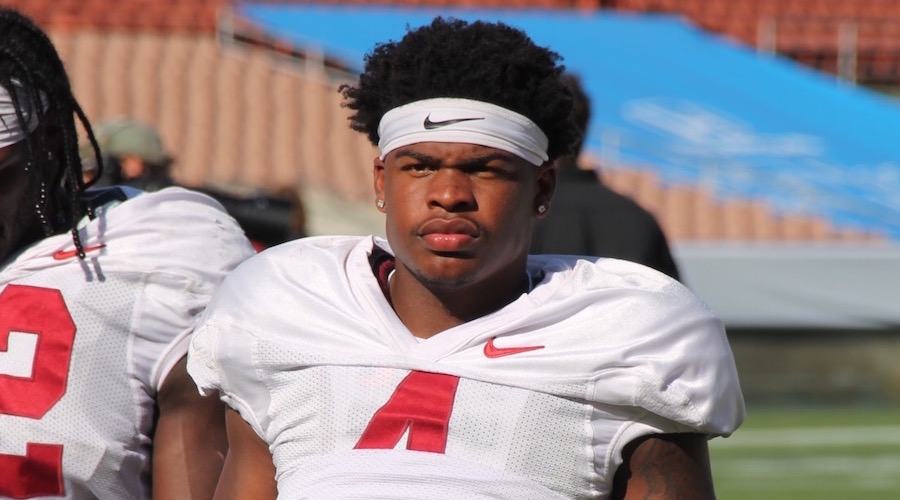 In this week’s edition of the mailbag we discuss a lot of USC vs Alabama topics, the status of Chad Wheeler, the Trojan safety spot, and more.

Do you think Stephen Carr will sign with the Trojans on signing day?

Yes, I do think Stephen will sign with the Trojans and he’s at the top of my wish list for this class. You just don’t see many running backs like him these days.

Why do you think Stevie didn’t have a more prominent role at Utah and has become our ”savior” of sorts here? I’m glad to have him and by all accounts he’s playing well, but most would assume non-starters from other programs couldn’t crack our starting lineup due to all the ”talent” we have (in most cases).

Is this just an adjustment to the Bigelow injury, or does it show our depth at NT isn’t what we thought it was? I’m sure it’ll take time for Rodgers to come up to speed, but he was a contingency as well.We knew A. Woods was leaving, seems like NT was all riding on Bigelow. Thought Daniels and possibly Scott were further along?

Stevie’s only good for 1 season correct? Hope we get that position more secure next year.

Stevie wasn’t a starter at Utah in part because they had some other pretty good d-line players. It’s not like he didn’t play at all, he had some decent production and based on what he had done I agree that not too many people projected him as a starter for the Trojans when he transferred in. The injury to Bigelow didn’t open the door for Stevie as much as the injury to Jefferson. Kenny was actually playing DT when he got hurt, while Jefferson was penciled in as the starter at nose. And yes, Stevie is only eligible for one year with the Trojans.

Garry, has Helton or staff alluded to any shifts in recruiting philosophies as to the type of players they are targeting – character, toughness, grades, etc? It appears this class is heavier weighted on 3 star, blue collar, lesser know or hyped players than in the past, thanks.

They haven’t discussed any shifts in their recruiting philosophies, although the trend you mention is one notable part of this class because they are filling spots early while there are still an awful lot of big-name recruits on the table. It will be interesting to judge where things are at when signing day rolls around because USC is accustomed to getting our share of those highly-ranked players.

Helton said he will stick with the starting QB and not rotate. But after naming Max the starter, he said he sees some plays where they can use Sam. Is that a slight contradiction? Shouldn’t he use Browne for all plays? Brining in Sam is almost like a rotation and shows he lacks confidence in Max.

As Helton put it regarding using Sam, “The opportunity to get a good athlete in during certain situations is something that can be advantageous to us”. I see it as a coach looking to be creative with his roster rather than any kind of lack of confidence in Max.

Who are the potential RS Candidates? Will Whitney RS or potentially transfer if he has a year to play?

This is all fluid, of course but right now I would see Fink, Malepeai, V. Jones, Sidney, Angeline, N. Smith and Martin as definite redshirts. I could also make a case for Jimmons, Iosefa, Vaughns, J. Imatorbhebhe, Young and Pollard but any of them can end up playing. I see Pittman, Murphy, Betiku, Price, J. Jones and Fatu as guys who will definitely play. Cook is likely to redshirt based on his injury status. We haven’t heard the coaches discuss the option of redshirting Whitney but I think there is merit to the thought.

Does this first game/ weekend feel like a bowl game/weekend? This is the biggest game we have played in since the National Championship game against Texas (in my opinion). If we win this game, it could give a HUGE boost in recruiting. Do you agree or I am I over-hyped for this new season?

I don’t think you are over-hyped at all. I think the build-up for the game is tempered a little from a lot of the national media (i.e. GameDay going to LSU vs Wisconsin) because the Trojans aren’t a top-5 type of team right now, but it does nothing to take away from how I’m feeling about the game either, I love these big early season match-ups and the chance to make a huge statement.

I’ve often felt that it is easier for the defense to play well and stop the offense in fall ball because they go at them all the time and basically know what they are going to do (save for the exceptional run or play here and there). As noted in one of your articles, the D won the day more than the O. So, how much of that is the D’s familiarity w/the O verses the D really being superior at this point?

I would put the biggest reason as the impact of Clancy Pendergast. It shouldn’t be a surprise that he’s seen such immediate improvement with the defense since we’ve seen quick turnarounds from him before but it’s still refreshing to see some of the changes he’s made, and how the players have responded.

Garry, how has the offensive line looked in the last few practices? Wheeler’s injury has me a little spooked – not just due to his availability, but also due to the shuffling around it may require. I really thought that solid OL play would be one of our team’s strengths this season, and we will need it to be to be competitive against Alabama, Stanford, and Utah over the first month of the season.

I don’t think the o-line is where a lot of SC fans thought it would be right now and the Wheeler injury is the primary reason for that. It’s hard to sugarcoat the absence of a left tackle who is entering his fourth year as a starter even though there are quality options available in either Banner or Edoga moving over on what is hopefully a temporary basis. And as you mention, a couple big tests come early so it’s not like there is a grace period for the Trojans to figure it out. Here’s hoping for a Wheeler return sooner rather than later.

What is Wheeler doing for therapy and is there a projected return date?

Helton said Wheeler has been doing “movement” drills with S&C coach Ivan Lewis, and he had an injection last week which is supposed to be a treatment that works in a lot of cases. The hope was for Wheeler to be back this week but that hasn’t happened yet, although Helton was encouraged enough by what he saw yesterday that he called Wheeler’s return for the Alabama game at “50-50”.

With one of the deepest S groups that we have had in awhile, with J.Cook being slowed by an injury, is the plan to get him reps this season or are we going to RS him and allow some bodies in front of him to leave and give him a fresh start in 2017?

I would say redshirt right now since we haven’t seen any sign of him doing the kind of work which would indicate he is close to a return. Can’t wait to see him though, he passes the eyeball test as well as you could hope for a freshman safety.

Garry, Connor Murphy is a big kid. Does he see the field against Bama?

Heard any news about a pep-rally the night before?

Here’s the Alumni Association page with info on the pre-game events https://alumni.usc.edu/weekenders/

Garry, do you think we have reason to hope/expect the safety play will be at least decent this year? If so, why? Thanks.

Yes, I do. And as noted above in other answers, a lot of that optimism is based on Pendergast. Not only are his schemes simplified to allow the players to play fast, but the secondary is one of the units that usually performs well under him. And we do have some decent experience back there with guys like Tell, Hawkins, McQuay and Plattenburg, plus I think Ross has an impact this year.