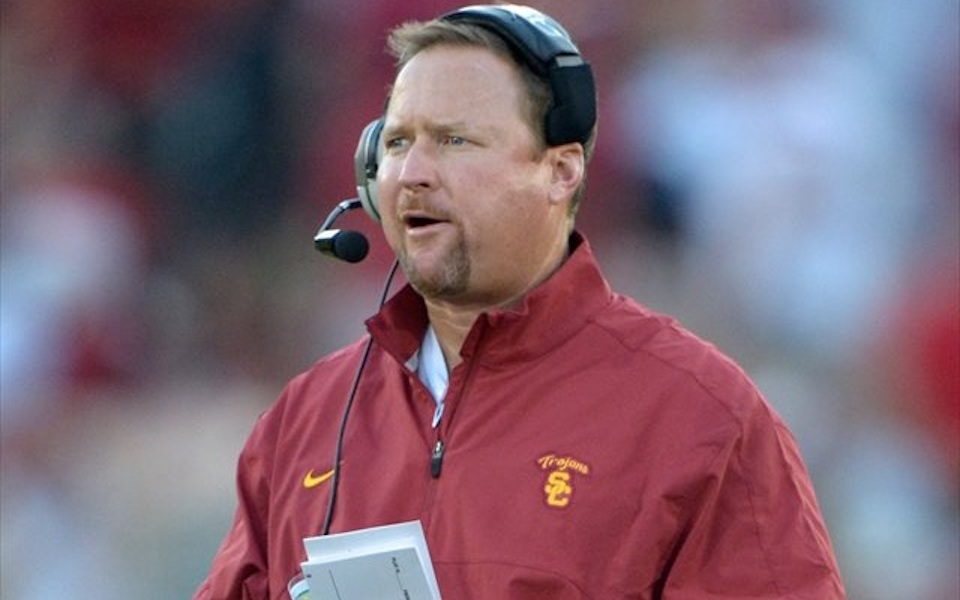 Garry, what is the status of Australian punter Ben Griffiths? Thank you.

There continue to be media signs pointing to him being here for the fall but nothing has been confirmed and he doesn’t appear on the fall camp roster yet. That could easily mean a blueshirt role (in which case he would be added to the roster after the first practice) or a preferred walk-on.

Football is all about matchups and effective football strategy looks to exploit the mismatches. Looking at some of the recent and targeted recruits (mostly at RB, CB, and WR) is there any concern that SC is over-emphasizing size at the expense of straight talent? Speed kills.

No concern here because I think the coaches have done a pretty good job of bringing in guys with different skill sets in order to create those mismatches. Yes, it’s always nice to have the speed of someone like Isaac Taylor-Stuart, who won virtually every 40 at the camps and combines last year, while someone like Amon-Ra may not have pure sprinter speed but he’s got enough straight talent to have 20 touchdown catches last year, in addition to being a terrific punt returner. If you look at the tailback spot I think we’ve got four backs who can do different things but the one thing we don’t have there is pure speed, but you’ve got speedsters like Kenon Christon and Giles Jackson as priorities for this recruiting class.

GP, most of the discussion regarding the return of Drevno has focused on his potential impact on the O line, but he is officially the RB coach.

Yes, Drevno (photo above) is the RB coach but he’s also the run game and pass protection coordinator, and both of those titles involve working hand-in-hand with the o-line.

Please let us know what you think the availability of Carr, Daniel I and Marlon will be when the season starts. Thanks Garry.

Based on what we saw in summer I feel good about Marlon being ready since he was able to do a lot of on-field still work, but obviously with a back injury you never know until he gets into full contact. The same would apply for Carr although I like the fact he was cleared for contact last week. With Daniel we just don’t know as he was limited to one catch in the summer PRP’s. It’s been over a year since he first suffered the injury and we still don’t know what his status will be, frustrating. We will definitely update on all three once we get into camp.

If JT gives us the best chance to beat stanford and texas, do you start him against unlv to get his feet wet, even if he has not clearly beaten out Fink and Sears on the depth chart?

If JT is giving the best chance against Stanford and Texas then that would probably mean he is ahead of Fink and Sears at some level, and if that’s the case I would start him in the opener.

I just saw a tweet saying LB Taylor Katoa is leaving the program and taking his two year LDS mission. If true, is he coming back after the mission? Why did he decide to do this now… etc.Thanks Garry

It is true. The timing of the announcement is a little surprising just days before camp starts but we hadn’t seen Tayler on the field this off-season as he continues to rehab from a knee injury so it’s unclear how much he would have contributed this year anyways. If it makes sense for him to do it now and be able to return for the 2020 season then good for him, and the plan is for him to return to USC after the mission.

How big a difference will Keary Colbert make?

I’m looking forward to seeing him in this role for many reasons. He’s paid his dues, he is respected by those in the program and he’s a Trojan through and through. As a player he was known for doing the little things right and I would imagine that would translate well to working with the tight ends and slot receivers. I’m hoping he has a similar impact on his position group that Kenechi Udeze has had on his.

Garry; just as you mentioned with the rotation at NT, if Carr is not 100% at TB, do you think that Stepp can get some play time to help the rotation there. I am dying to see Carr but also Stepp may open some eyes when he “stepps” up.

Sure. The new redshirt rule would allow you to take a look at Stepp in the rotation without automatically burning his redshirt year so there would be the opportunity to see him in game action, although I don’t know how many touches there would be since there are others like Ware and Vavae who are capable of bigger loads. Markese is as much of a “wild card” as anyone in this class because he was such a late flip that we didn’t follow him in his high school career so we don’t really know what to expect.

How does moving Toa to Center help us? Was he really the best choice? It almost feels like this is a move designed to help position him for the future. But then I think I’ve heard we have better options at Tackle now, so maybe you just have to find a spot for him as you don’t want to lose his leadership and understanding of the system?

On paper there are several ways it makes sense. First it puts Toa at what many people is his best position, and that means you have a veteran player taking over at the important center spot. It wouldn’t make as much sense if you didn’t have anybody to take over for Toa at left tackle but the Trojans do, and it’s someone in Austin Jackson who has a ton of potential (assuming Austin can beat out Clayton Johnston).

It seems like there is a lot of hand wringing going on about the QB situation. Since Carson Palmer’s last season, QB has always been a team strength (with Matt Barkley’s true freshman season being the weakest of those), particularly by the end of the season. Why aren’t more people confident that we’re eventually going to be solid behind center?

I think the key word is eventually because I do think most people are confident that the QB spot will be fine, eventually. It’s just a question of how long is eventually when it comes to this season because the opening part of the schedule offers some legitimate challenges to a new QB, especially the early road games against Stanford and Texas.

Here’s the practice dates but we aren’t given any notice of pads/no pads, full contact, etc.