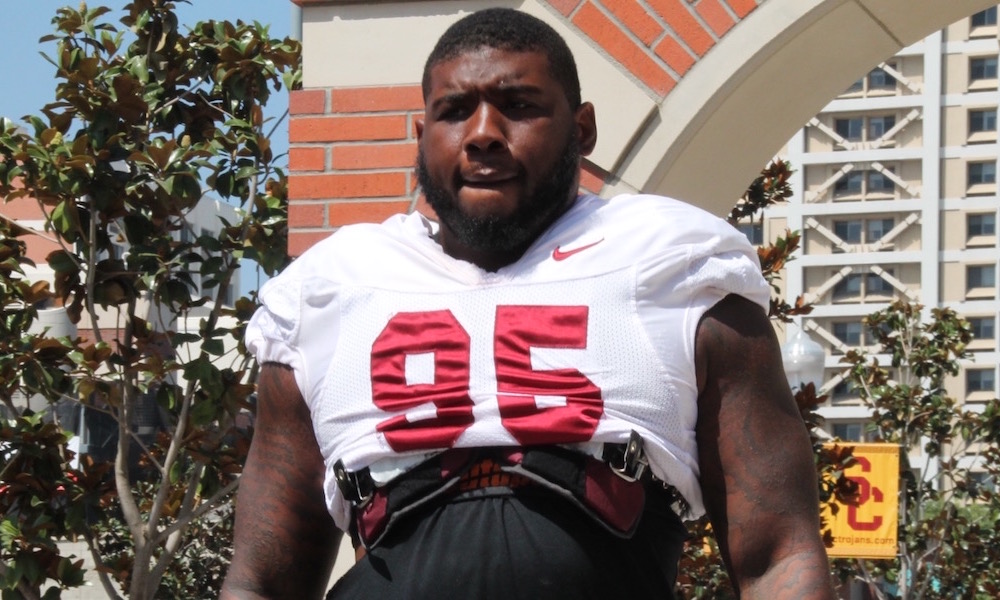 With his skill set and apparent place on the depth chart has Dom Davis been looked at as a kick returner? It seems as though he is willing to explore options to contribute, any info you could pass along?

Yes, Dominic has gotten looks in the return game at various points but right now Helton is saying it looks like it will probably be either Jackie Jones or Velus Jones is those roles, maybe Ajene Harris. Dominic took some extra punt return reps after practice so maybe he’ll take another run at that spot. I’ll say this, he’s only been at corner a few days but I like his aggressiveness, it will be interesting to see if that move turns into something.

Where do you see Kenny Bigelow fitting in with the final picture?

So far Kenny has been admittedly rusty in his football technique but the good news is that he’s been out there every day and had no setbacks. I would be content if Kenny is able to provide a legitimate third option at nose along with Josh Fatu and Marlon Tuipulotu, and if he works his way into more than that it would be great.

With the build-up of Rojo and Carr, my son asked about #5. I had the pleasure of showing him amazing SC highlights and told him about watching him at Helix. He was truly incredible and so much fun to watch. Is there any movement by the university to bring him back into the fold? Or do we need to wait for the McNair lawsuit to run its course? Am I the only one who believes the NCAA punishment for SC was very heavy-handed and did not fit the crime (especially compared to the PSU penalty reduction, Cam Newton whitewashing, Miami, Ole Miss, etc.), and that we can signal that the sanction era is over by welcoming back #5? Lynn Swann — READ THE THURSDAY MAILBAG

I haven’t heard any movement since Pat Haden talked about wanting to see Reggie come back and finish up his degree, but I do think it’s possible that we could see something based upon the McNair case. There are some who think that once the NCAA either loses in court or pays a settlement that it would an opening for USC to get some relief in the form of returning the vacated wins, titles, etc and possibly altering the ban on Reggie being involved with the university.

Biggie has had a quiet camp (INTs in the last few practices). Is it because he has focused more on the fundamentals than making plays on the ball or the QB avoiding his side of the field?

I think we’re seeing a more mature Biggie as a player. Darrell Rideaux was at a practice earlier in camp and he talked about how Biggie seems more comfortable in his coverage and isn’t as “grabby” as he was as a freshman corner. That kind of growth isn’t surprising for a third year player but it’s still nice to see.

Are welcome and appreciated very athletic position changers Daniel and Davis eligible under NCAA rules for redshirt year or is it only available for freshman new arrivals?

Both are still eligible for a redshirt year as they haven’t taken one yet. The redshirt year isn’t limited to freshmen, you can take it at any time.

It appears you have a new person doing interviews. How do you select these people, and how much training, guidance and editing do you do.

P.S. Whatever interview I observed, I thought the young man did a very good job.

Just curious about your staffing process. I have seen quite a few different people do the interviews, but never heard you discuss hiring.

We try to have one student intern per year for various roles. We had Natalie Kalibat for a couple years, she was a USC diver and is now entering her 2nd year on-air at a TV station in West Virginia. This year we welcome Angel Viscarra, a junior at USC who is also looking to become an on-air reporter. As someone who did three internships in my time at USC I’m a big believer in students getting some “real-world” experience, and I think the students these days are so well-prepared with the resources available to them through the Annenberg School.

In your opinion….differences between 2 a day vs the new NCAA rule…….benefits on installing playbook? is your job more difficult (morsels of info now vs more during 2 a days)?…on all your opinion on the new rule.

I would think it’s a huge benefit in terms of installing the playbook. Camp started earlier this year in part because there are no two-a-days, and that means more days with a single practice. That is a little less of a physical grind and more of an opportunity each day to focus on the one practice and what you want to get accomplished. This staff is fairly unique in that way, there isn’t a lot of yelling at practice, they take their share of breaks during practice, but you can’t argue with how it’s working.

How many receivers do you thing will make an impact this year? If you had to chose a top 3 who would they be? Id go Burnett Tyler Vaughns and Velus Jones

My read is that there will be three receivers at the top of the catches list (Deontay Burnett, Tyler Vaughns and Daniel Imatorbhebhe) but there will be a lot of guys in the 20-25 catches range on the year (Steven Mitchell, Velus, Jalen, Petite, Josh Imatorbhebhe, etc).

What will the starting defensive backfield look like? Will Jack Jack start in Adoree’s place and will J. Cook see a lot of playing time?

Can we expect a two-deep at the end of ”fall camp”, and the beginning of game prep? If so, will it be only for Western Michigan, or excepting the Cam Smith situation, can we expect it will be for the first few games?

Yes, Helton has said he will release a depth chart on Saturday. The depth chart is a week-to-week thing during the season and Helton releases one at the beginning of each week.

Is Matt Fink ready for prime time in case Sam goes down for any length of time? Reports have been good.

Ready for prime time? I’m not sure if that’s the case just yet but we’ve definitely seen progress and right now he’s looking clearly like the #2 guy. There’s a lot to like about Matt’s potential as an athletic QB, a guy who can move and who has a strong arm, but the biggest thing for him is consistency of his accuracy.

Is Wole ready to see more minutes this year? He came to SC amid a lot of fanfare, but was apparently a bit raw and didn’t play much as a freshman. I know Gustin and Nwosu are very solid in front him once again; do you think Clancy will find a way (or a reason) to get Betiku some more playing time this year? Haven’t heard much about this physically gifted player.

Is Connor Murphy in the same boat?

I do think Wole and Connor can be viewed in somewhat the same way. Both seem right on the cusp of being players; Wole brings that undeniable physical presence and energy, while Connor is a big, thick guy who brings a lot of raw strength. We haven’t really seen either guy take a huge step up in camp in terms of making plays but I do think we could see more of them in a rotation, particularly with the issue of no bye weeks for the team. They are two who could really help in that area, and hopefully the increased playing time results in making plays.

Edoga and Tell are both back. Falo is not, and I haven’t heard any real timetable for a return. Not sure on Olajuwon status.

Has there ever been any talk of bumping Gustin inside on obvious passing downs and brining Wole or another guy in off the edge? I think Gustin has the strength and could get a push for the inside. This would be similar to what the New York Giants use to do with their “NASCAR” package. It would allow our best pass rushers to be in at the same time.

I haven’t heard any talk of that lately for Gustin. He’s at 258 pounds right now, a big guy on the edge but not so much if you move him inside. Maybe it gets looked at if we start to see Wole bring that extra something as a pass rusher.

How much d-line, lb and secondary rotation do you think CCP will be comfortable with?

I think it will be more than last year. Clancy places a premium on players knowing his playbook, and in his 2nd year I think there are more players who know it, so that is one factor. Also, the no bye week is something the coaches are paying attention to so they will likely be proactive early on in terms of rotating more.