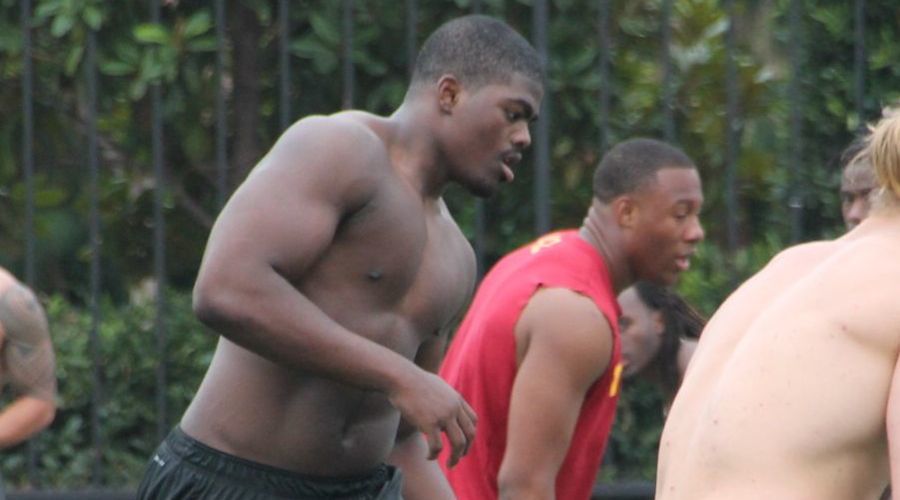 In this edition of the mailbag we discuss the state of the defensive line, potential redshirts, Marvin Wilson visit and more:

Garry was Massina a regular participant in the PRP’s? Do you think that he will play up to the potential that he showed out of high school this season?

Yes, Osa Masina was a regular participant. I don’t know if he’s ready to live up to those expectations, although he certainly came in with every bit the promise of Cameron Smith and Porter Gustin. I was hoping to see him make a move this summer to join those two as foundations of the defense but that hasn’t happened yet. Would love to see it start in fall camp.

With the pads coming on very soon, who do you think will have more decisive victories in practice, offensive line or defensive line? Maybe an even split?

Part 2: of the freshman who redshirted on the line last year & new additions, who do you think will start making noise (Rector, Jimmons spring entrant, Scott, K. Rodgers, etc)

If I have to pick a group right now I’ll go with the offensive line. They are the more experienced and deeper unit. The good news is that we’ll get plenty of opportunities to see them go at each other for real when the pads come on.

We saw flashes from both Rector and Scott in spring so either one of them would be nice. And I’m hopeful that the experience of Stevie Tu’ikolovatu will show right away. My sleeper is still Khaliel Rodgers, it’s a tough transition to make from o-line to d-line but I think he has a chance to make an impact.

Garry, Great teams get contributions from role players. What can we expect in 2016 from these players – Dorton, Hill, Rector?

Dorton is the most critical on that list as he’s going from a reserve without many expectations to a current starter at a key spot. I was encouraged by what we saw from him this spring and would love to see that progress continue in camp. It’s hard to really know what to expect from Hill. He’s got the talent to make plays, but he hasn’t always shown the kind of good decision-making, on or off the field, that Helton preaches about so often. I do take it as a step in the right direction that he was at some summer drills after being absent from spring ball. Rector will get the first shot at being the first reserve behind Rasheem Green and it would surprise me if he doesn’t keep that role.

Gary….a few weeks ago someone stated that Marvin Wilson was visiting USC on the 23th of July unofficially….any news on how that went?

Wilson did make the trip, which coincided with him being in Las Vegas for a basketball tournament. Wilson raved about the visit afterwards, but he is also someone who has raved about pretty much every school he has visited so there is still a long way to go on this one.

What is your take on the oline and dline

If we can’t make it work with this o-line, with this much experience and talent, with this kind of depth, and with a position coach like Neil Callaway, then we have a real issue. I’m not proclaiming them as the top line country like some in the media have done, I’m just saying everything is seemingly there to make it work. And there are few things I would like to see more than for the USC offensive line to return to a style of physical dominance.

I’m taking a wait-and-see attitude on the d-line right now. I recognize the reality of the problems with a lack of depth or experience but it’s not like the cupboard is bare. And I think Kenechi Udeze is the perfect coach for this group because he’s not going to be worrying about any excuses, it’s going to be all about hard work to get them ready.

Recruiting looks very slim this year, will we have problems reaching 20 recruits?

I don’t anticipate a problem. This staff showed last signing day that they know how to close a recruiting class.

Can our RB Coach get the players to pass pro?

We saw several pass protection drills for the running backs in spring ball and coach Robinson was definitely animated. He paid a lot of attention to Ronald Jones. Justin Davis is already a very good pass blocker, no surprise for the senior.

I keep hearing about Q. Powell being a possible starting weak side linebacker. Is this credible and how does he fit in CCP’s defensive scheme? He seems to be a tweener in line with former Trojan Dion Bailey.

I do think there’s a chance QP ends up a starter, primarily if Cameron Smith is not back in time for the early games. I think Hutchings gets the spot next to Smith if Cam can go but Powell is the one we’ve seen the most as the 2nd starter in summer drills. He definitely qualifies as a tweener size-wise but he’s pretty active and Pendergast knows him a little better because Quinton was here the first time Clancy was here.

Where do we stand on the DL in light of the Rogers move, Utah transfer, incoming guys, etc?

The depth and inexperience issues are still there but maybe not as huge as they appeared at the end of spring. The starters should be Rasheem Green, Noah Jefferson and Malik Dorton across the front. Green (photo above) is obviously the linchpin of that group with a chance to he a special player. Jefferson is athletic for his size and just needs to keep developing, and stay healthy. Dorton, as mentioned above, has been a pleasant revelation so far in a much-needed role. As for the reserves, there are some bodies: Rector, Scott, Daniel, Jimmons, Fatu, Tu’ikolovatu and Rodgers.

With summer workouts coming to an end, how would you assess team chemistry? What is the sense among the players? Is it on individual accomplishment and self-promotion or on a cohesive team effort? In my view, this group of players coming together with a consistent unified commitment to passionate team effort would represent a major developmental advancement.

I think team chemistry is one of the better things we’ve seen in summer workouts. Lots of guys being vocal, lots of older guys helping younger guys. It’s one area where the Helton impact can certainly be found. Now it’s just a matter of translating that to the field in the fall.

Garry, of the kids we are recruiting, which 5 would you most like to see end up as Trojans?

Very early in the season, but given your insight and opinion, how many players do you think we redshirt this season?

Guys who will not redshirt: Jackie Jones, Connor Murphy.

Guys where injuries may impact whether they redshirt or not: Oluwole Betiku, Jamel Cook.

I didn’t list any of the three “big” wide receivers, I don’t think we need them this year but we will need them next year so the coaches may want to get their feet wet a little this fall.