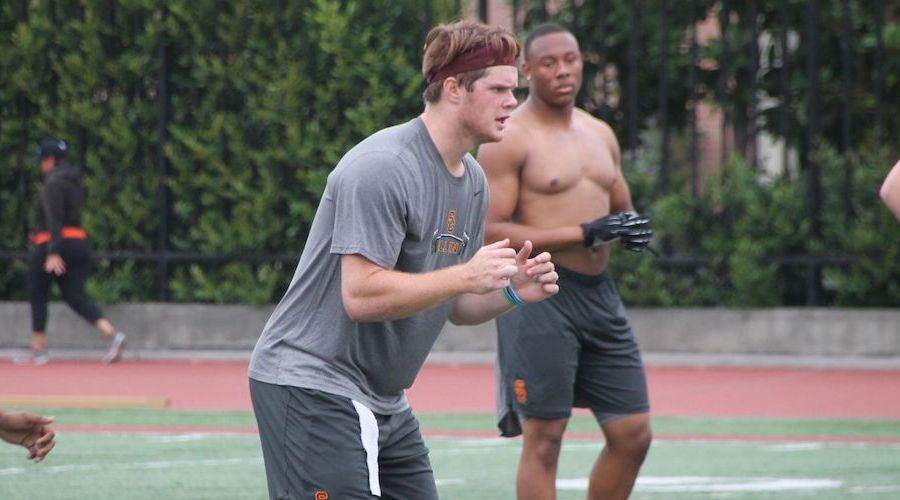 In this week’s edition of the mailbag we discuss Tee Martin, the mobile dimension of Sam Darnold, the strength of the USC cornerback spot and more:

Hello Garry! 2 unrelated questions, please: 1) I haven’t heard or read much about Ronald Jones. How is his off-season preparation progressing? 2) The Big 12 announced it is searching for potential expansion schools. Larry Scott recently talked to Houston (a program that most people outside of U of Houston alumni care about). Are the Big 12 and Pac 12 competing for the same schools?

Ronald has been out there quite a bit but this isn’t the kind of setting where he’s going to make a lot of noise (the biggest splash he made this summer was probably the fact that he shaved his head). If you remember though, he didn’t really make much noise in the summer sessions last year either as a true freshman but once the real games started he was just fine.

As far as Houston and any talks with Scott and the Pac-12, I got the sense with the timing of that “announcement” that it was pretty much a move by Houston to try to show the Big 12 that they were talking with other conferences like the Pac-12. I didn’t get the sense there was any interest from the Pac-12 part.

My question comes out of HCCH’s very affirming comments about Tee Martin at the Media Day — it was absolutely glowing. So given his great respect for Tee and, you would assume, a high degree of trust in his little brother, have you had a chance to observe the chemistry between Ty Helton and Tee Martin? What is their relationship like?

We’ve only seen them on the field for the spring ball sessions so I can’t really comment on Tee/Tyson relationship beyond the fact that they seemed to get along fine on the field. The real test comes this fall when we see how their chemistry works during games because you do get the feeling Tyson is going to have an influence in the game plan and play calling. I agree that those thoughts from Clay on Tee were very interesting, and I can’t wait to see how he does in his first stint as an offensive coordinator.

Viewing the replay of last year’s national championship game, I couldn’t help but notice QB Deshaun Watson’s mobility being a plus against Alabama’s defense. Can you see this variable playing into CCH’s decision on picking the starting QB (obviously favoring Darnold)?

Yes, I do think that will be part of Helton’s overall evaluation process. We’ve seen that dimension on the practice field a few times when Darnold (photo above) breaks free for a run and it’s something he definitely brings to the table.

Do you get the sense that we will be a true uptempo/fast paced team or at least be able to convincingly pull off that characteristic on occasion?

I’m going to go with option B, something that we are able to convincingly pull off on occasion. Helton has talked about there being times in a game where it makes sense to speed it up even though that won’t be the full-time goal.

Any sign of Cam working out on sidelines? My big concern is can he be ready for tide & furd. Should we realistically think Oct?

He doesn’t do any work when he attends the throwing sessions, he stands in the back watching and talking with other players. We can’t speak to how much he may be taking part in the conditioning sessions as we are not allowed in to watch those. I’m remaining hopeful that he’ll be able to do enough in fall camp and be ready to go for the opener.

Talent-wise is the secondary 2-deep as good as it has been in the last 15 years? And will it live up to its billing? it could impact D-Line play in a big way.

I think the corner group has a chance to be as good as any we’ve had in a while, led by a starting duo in Adoree’ and Biggie that could be the best at SC since Daylon McCutcheon and Brian Kelly. The depth was really helped by the move of Ajene Harris, and freshman Jackie Jones has shown in summer workouts that he will be ready to contribute right away. Isaiah Langley and Jonathan Lockett are also options. I think the corners could benefit as much as anyone by the presence of Clancy Pendergast, he’s known for his work with that position. There are a lot of good bodies at safety too. Right now I would project Marvell Tell and Chris Hawkins as the starters, with John Plattenburg, Leon McQuay, Ykili Ross and Matt Lopes in reserve. You also have C.J. Pollard and Jamel Cook as freshmen, although Cook’s status is unclear coming off a foot injury.

Do you expect some shuffling around at ILB once fall camp starts? Body-type wise, I would think Uchenna is a logical fit, but they have invested time in him on the outside. Ruffin seems like a guy that should be outside where Uchenna is slotted. It appears that there are more candidates to play OLB/RE than there for the inside positions. Do you think Clancy likes the smaller, faster ILB’s in his scheme?

I see it more as an indication of the priority Clancy places on the edge rusher. He likes to attack with the two outside guys (Devon Kennard and Morgan Breslin in his first stint at SC) and he’s loading up on bodies right now to make sure he finds the right guys at that spot. We’ve seen Osa Masina and John Houston both move inside after originally being slated for the outside when Clancy first got here so it shows he will take a look and move guys around as needed. Right now, however, it would surprise me if Uchenna moves inside, I think he’s stays outside as the starter opposite Porter Gustin. Ruffin is a reserve on the outside.

Do you think that Ware might see time at fullback or H back this season?

That would surprise me, he’s only worked at tailback and I think that’s where he stays. Vavae Malepeai is a guy who I could eventually see being used as a fullback/h-back type.

2 under the radar guys Jordan Losefa and Liam Jimmons I think we have something here do you agree?

Solid summers for both. I’m still hoping to redshirt both of them as both are moving to new positions where they will need to add more bulk but the early play they have shown is pretty encouraging.