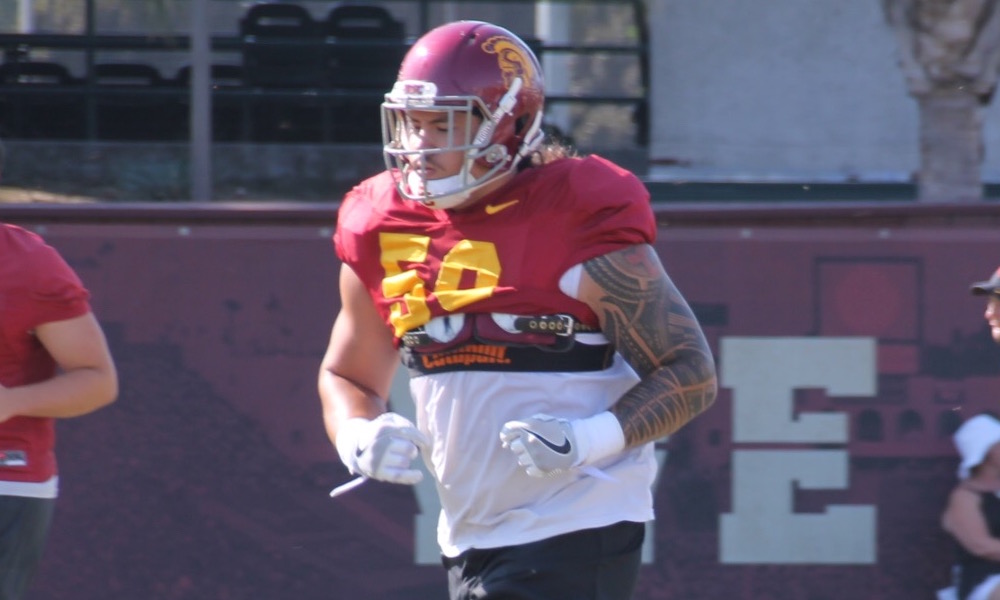 Who would you say is the leader in the DL group. I think the past two years were nice where Stevie T helped lead the young guys in 2016 and Rasheem Green took over that role in 2017 (even if it was just leading by example).

Even though Porter is technically an OLB we see his position work most often with the interior DL, particularly in pass rush drills, so I’ll consider them one group, and he is the leader. One of the things I really liked this spring was seeing how much more vocal Porter was in that leadership role and it seemed natural for where he’s at in his career. I’ll also note Malik Dorton, I think he’s more of a leader for that group than most people would think.

And similar question for the offense. Is Toa the natural leader for this year or do you think it will be figured out once the QB competition is over, or maybe even someone else?

You are correct, it’s Toa. He’s such a respected veteran.

Garry — 2 related questions after watching our NCAA Track and Field success and LeBron’s Decision 3.0 — 1) how much interaction does the 2018 football team have with our other sports programs (is there any overlap)? Do the different programs feed off the success of other SC athletes? and 2) With LeBron at the Lakers, the projected success for both the Rams and Chargers, Dodgers in playoff contention, new LAFC joining the Galaxy — how is the Athletic Department handling this congested sports market — unlike other “blue blood” locations where college football dominates the sports landscape? Thanks as always for taking our questions.

1. Plenty of interaction. These are college kids who train together at the McKay Center, have tutoring together, classes and social lives together. After the PRP the other day one of the national champion women’s track members was walking by as the football players were headed to the locker room and there were a lot of congratulations given.

2. It’s a realistic issue for the business side of the department when you’re competing in a crowded space for sponsors, donors and ticket sales. And now you’ve got a brand new state of the art NFL stadium coming as well and competing for events like the Olympics and the College Football Playoff. The best thing that the football team can do is win, there is no substitute for that, but I’d also like to see more ancillary media work done to help with the marketing side. Under Carroll we had TV shows like Trojan Rewind and the USC Coaches Show, and on radio we had the Trojan Roundtable and Trojan Brunch shows. Would love to see programs like that return.

GarryP-how much can former players like Matt and Ryan Kalil
be involved with the player run practices while working out on campus?

We’ve seen former players stop by, maybe hop in a few plays and give some tips, but that’s about it. I don’t know that there are any rules preventing more than that.

Is this the deepest quality of depth on defense since the Pete C days?

Without a doubt. Of course, those pesky sanctions were a big blow to the depth factor in that time period but when you look on the defensive side of the ball now you see the kind of depth we were used to in those days. And it sure is good to see.

This is a question about how an O-line operates and if it compares at all to other sports.

In basketball, generally speaking, a team can defend either zone or man to man. Also, a team will often switch between the two or even between different zone looks.

It seems that if a QB is under center with an O-line that knows the snap count coupled with a physical advantage (strength or at least bulk) USC could be more successful in short yardage conversions, especially against smaller or weaker teams.

Sure, man-on-man blocking in those short yardage situations is simplistic yet effective, and I definitely think it works better when the QB is under center. It’s a physical mindset that has won many a battle for Trojan football over the years and one that the program took great pride in (Marv Goux called it Big Man on Big Man). There is no better example of the shift that we’ve seen in recent years than the Washington State game last year after the Nwosu interception at the two-yard line when we came out in the shotgun and threw the ball.

I might be way off on this and you might have already commented but doesn’t it seem like this year’s summer participation in PRPs is way down compared to other years? If so do you think there will be an early lag in Fall camp?

Yeah, I think the participation has been a little down from the past but most of it is injured guys sitting out the sessions. The actual attendance at the sessions is still pretty good, especially when they follow a team conditioning run.

GP,
How do you expect the relationship between Callaway and Drevno to work? And is your expectation that Callaway will retire after this season and Drevno will then take over as o-line coach? Thanks.

That rumor is definitely out there about Callaway possibly retiring at the end of the year and I think it would make a smooth transition with Drevno already on staff if that’s the case.

Who is standing out at RB?

With Carr out of action we’re still seeing a good dose of Aca’Cedric Ware and Vavae Malepeai, and I think both of them have looked real good. Ware is the senior who waited his turn and he’s ready, while Vavae is just a load of a back who can run and catch. I can’t wait to see Carr back on the field but the other two offer solid options to either complement Carr or be the primary guys until he gets back.

There are rumors that certain team leaders, including Porter Gustin, went to the coaching staff over the off-season with concerns about (1) the strength and conditioning program and the nutrition program, and (2) the lack of physicality in practices. Is there any merit to those rumors?

Coincidentally, there was an article on Jimbo Fisher and his plan to resurrect A&M. He sounds like some of the dinosaurs on this board who have expressed frustration with USC’s inability to stand up physically, especially against the top programs.

Yes, we heard the rumor last Friday after the PRP about players going to Helton to talk about weight training and other issues. It will be interesting to hear Helton talk about what was discussed, he didn’t hesitate to provide details of his meeting with Chris Hawkins in the middle of last season.

Call your shot now – who starts under center on September 1st? JT, Fink, or Sears?

As we sit here before fall camp my guess would be JT but I look forward to seeing how things are once the three of them are actually on the field in pads in camp.

What do you think should be done with #55 on defense?
Give it to a promising freshman linebacker? Or only give it to a player that’s deemed to have earned it.

I’m fine either way but if you’re going to give it to an incoming freshman it needs to be the right kind of guy. The most recent #55 (Lamar Dawson) was a choice that didn’t work largely because of Lamar, not that he was a bad kid but it was just too much added pressure to live up to and it’s not something he asked for. Kiffin gave it to him as an enticement to sign and I don’t think it did Lamar any favors. The safer bet is to wait and see who emerges as a candidate, I think there are two in this class with Palaie and Solomon although I also like Solomon in #58 with memories of Rey Maualuga.

You mention PRPs are winding down. It seems like hardly any were held this summer compared to recent summers. Are my perceptions correct and, if so, is there a reason for this?

It was the same general number of sessions in June and July. I think one of the biggest differences (perception-wise) is the fact that we’re not allowed to shoot the full sessions so we don’t get to post highlights like in the past. When you were able to watch three minutes of field-level highlights twice a week from the PRP’s you got a real sense of what was going on but now all you basically get to see is warm-up footage shot from the vantage point of the track stadium while the action is on Brian Kennedy-Howard Jones Field. I think that changes the perception of how much work took place because you didn’t get to see it.