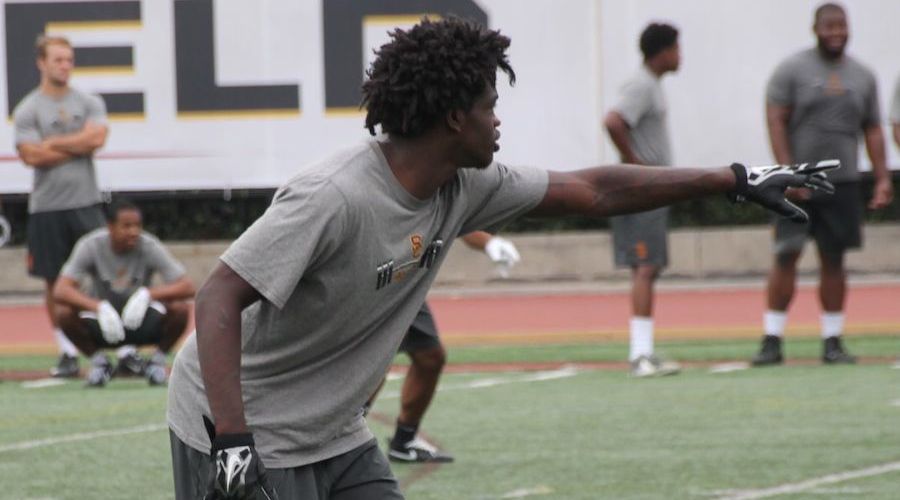 In this edition of the mailbag we talk Porter Gustin, Adoree’ Jackson, what we can learn from voluntary workouts and how Keyshawn Young got the nickname Pie:

How does Porter Gustin look compared to past but recent USC past rushers like JR Tavai, Morgan Breslin, maybe even Devon Kennard? Do you think he can win his pass rush battle against the OT consistantly?

He’s well on his way to being at that level, and the guy he reminds me of is Brian Cushing in terms of body type. And yes, I do think he can consistently win his battle against the OT’s he will face, although he will face a tough one in the opener with Cam Robinson.

Gary, while covering the Opening, how would you gauge the recruits feelings and impressions of this new coaching staff? I get the sense many are taking a wait and see approach to this staff.

I do think a lot are taking a “wait-and-see” and that’s fine. The good news is I think there are quite a few who are taking that view who may not have been taking it before, and that’s because this staff is doing a good job in building relationships with guys like Najee Harris, Darnay Holmes and Marvin Wilson. If/when the staff shows they can win, the recruiting results that follow should be impressive.

Garry, how much playing time do you think senior Leon McQuay will have this season? He did well as a freshman in Pendergasts one season and I hope has another as a fine send off year.

Leon is solidly in the mix of a nice safety rotation. I don’t see him as a starter right now but I do think he gets plenty of time at safety and on special teams. He really looks good physically this summer.

Far as the opening, why is there no home and away with Bama?

Kenny does not go through any of the player run practices but he is always there being a coach making sure things are being done right on the DL. He hasn’t been wearing any kind of knee brace recently if that is any sign of his progress.

I never heard of it being a “home-and-home” with Bama, this was always a single-time neutral site game on the schedule.

Hi Garry, have you seen Davonte Nunnery play? I recall he was a pretty good HS player and could have gone to a smaller school and started. Any chance he contends? Can he hold his own?

Davonte was definitely a pretty good high school player and he has some skills but I don’t see him cracking the corner rotation right now if everyone is healthy. We’ve got some pretty good depth heading into the season at corner and can go three deep if needed.

Garry, Adoree has missed alot of practice time due to track and Its very likely this will be his last year with the team. Does he need to have a big season to get drafted in the first round?

It would certainly help his quest for first round status to have that signature season, and it wouldn’t surprise me at all to see him have it under Pendergast. Clancy’s system is known for producing good corner play, and I think the overall improvement in coaching/scheme will help benefit Adoree’, particularly to showcase his man coverage skills. And I like the fact that Adoree’ announced at media day that he would focus primarily on defense this year.

Can USC afford to overlook recruiting a QB this next recruiting cycle?

I would take one, especially if Jalen Greene is going to be moved back to receiver full-time, which it looks like based on summer workouts. That’s just one spot where you don’t want to get caught short due to injuries or transfers, and right now the Trojans only have 3 QB’s on the roster (most coaches will tell you 4 is the comfort level). But you also don’t want to take a player just to take one, and it sounds at this point as if the targets are either Jack Sears or flipping Tua Tagovailoa.

From what you saw in spring practice and now summer sessions who are you’re starting 4 DB’S and the nickel back? For nickel do you go young CB or experienced Safety?

Adoree’ and Biggie would be my starting corners, with Hawkins and Tell as my safeties. I would go Ajene Harris as my nickel corner.

Gary- could name two players on offense and defense, whose role you believe will greatly increase this year, compared to 2015?

On offense I will say Chris Brown and the tight end spot as a group. On defense, Porter Gustin and Uchenna Nwosu.

Garry, this is probably a dumb one, but I’m curious – what can you learn from watching the voluntary workouts? There are the obvious things like how the QBs throw the ball, which receivers hold onto it, and who shows up, but what else can you glean from watching these workouts?

I think you can learn a lot from the workouts. You can see which guys have really improved in the weight room in the off-season, who seems ready for bigger roles, who are the leaders, what kind of work ethic and focus is being shown when the coaches aren’t there, etc. Last summer was a great example with the leadership role shown by JuJu, and it was a huge sign of the leap he took as a player in the fall. This year, to name a few, I’m noticing Zach Banner taking a major leadership role, I’m seeing Porter Gustin and Kenny Bigelow taking younger DL under their wings, and I’m seeing Max Browne organizing things as if he was already the starter.

Gary…have you heard any info on Isaiah Wilson’s interest in USC. Legit or just a trip to the west coast? Thanks.

Isaiah has been very proactive early in the process about expressing his interest in USC. It remains to be seen how legit it is but he is sure talking the talk.

Has there been a change in approach in athletic endeavors with the change in AD’s? What I’m getting at is there were times in which the perspective of the athletic program moved let’s say toward equality in gender sports and a de-emphasis on the major male orientated sports.

Lynn has been on the job two weeks so there hasn’t been any changes so far. I was on campus this week and asked an athletic department staffer what he has seen from Lynn and he said “he’s doing a lot of listening”. Swann has been meeting with people to get to know them and their roles, and that is something he talked about doing on the day he was hired so he’s following through on that.

Waiting until Feb of each year to confirm commits is a pain in the ass while at the same time being a time honored tradition. Do you think there will ever be a time when early commit signings are possible?

It can be a pain for the fans but it’s also the practical date when it comes to allowing recruits the chance to make official visits for one of the most important decisions of their lives. I think the only way you can do an early commit period is to allow official visits in spring of their junior year. The main issue I see with doing that, however, is the reality that comes with coaching departures, and do you hold kids to an early commit if the coach leaves after the season. I am in favor of the early signing period but I don’t think there are easy answers for questions like that.

According to one of the Miami websites, his grandmother gave Keyshawn (photo above) the nickname because it stood for “perfect in everything”

Which DL recruits show real interest in SC & what a ideal Feb class of DL would be?

Right now I think there are four primary interior targets in Greg Rogers, Marvin Wilson, Jay Tufele and Martin Andrus. My guess is the Trojans will take three in the middle and I would be thrilled if all came from that group.

The CB battle is an interesting one with a lot of inexperienced faces.

Assuming Adoree/Biggie are our starters, it is safe to assume Jackie Jones is our Nickel CB?

Or will someone like Harris/Langley/Lockett/Young or another DB not mentioned snag that spot?

I wouldn’t assume that, although my guess right now would be either Jackie or Ajene Harris. The only other option would be Langley but I would put those other two as more likely.