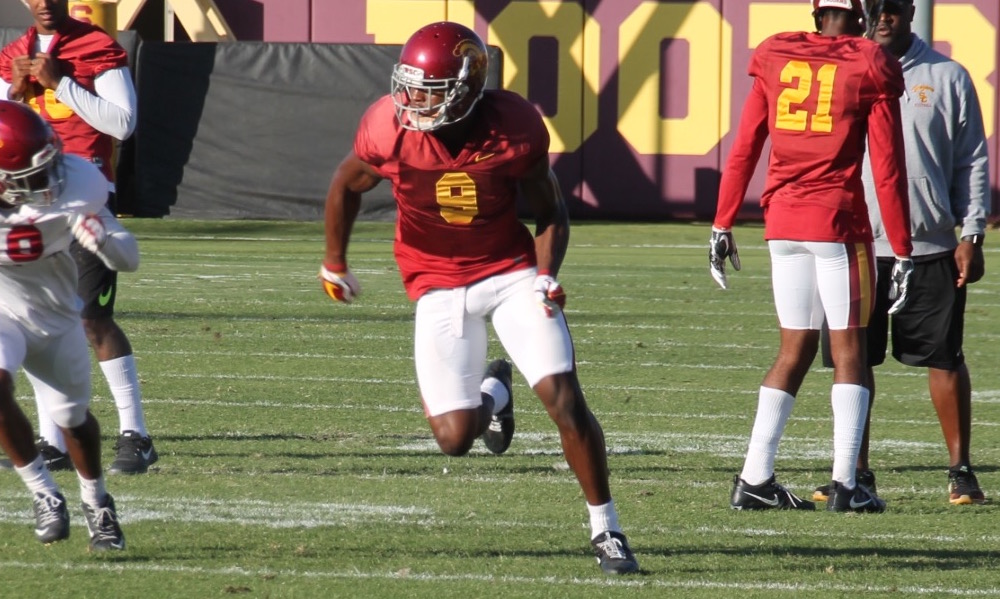 Can you provide any updates on defensive line recruiting? Specifically the NT position (Ika, Tuitele, Pola Mao, anyone else). It seems like they need some big bodies up front with the potential of Pili, Marlon, and/or Tufele able to leave after the 2019 season.

No doubt it’s a priority and I can easily see them taking four bodies on the line, if not five. Fortunately there are some good ones out there, particularly on the west coast. Some of the top local names are Kayvon Thibodeaux, Stephon Wright and Drake Jackson. Thibodeaux is a top national name and he backed that up at The Opening while making some SC fans nervous by saying he hasn’t been in recent contact with the Trojan coaches. Kayvon still listed SC in his recent top 5. I think Wright and Jackson are kind of under-the-radar and I’d be happy with either player, or both, in this class, and I can see that happening. Siaki Ika is a huge nose tackle from Utah who had a good official visit to USC but Alabama looms large for him as well. Northern California is represented by Laiatu Latu and Joshua Pokula (both of whom were on the official visit with Ika and came back with rave reviews) and there is also Jacob Bandes, who won the DL MVP award at The Opening but has yet to receive an SC offer. Pola-Mao is coming off an injury and hasn’t taken part in camps, it will be key to see how he plays once he gets back on the field. And, of course, there is Faatui Tuitele from Hawaii, who once seemed destined for USC but his most recent list didn’t include the Trojans.

I also haven’t seen much about the following incoming freshman – Devon Williams, Abdul Malik-McClain, Eli’jah Winston, Liam Douglass, and Isaac Taylor-Stuart. Could you provide anything you’ve seen from these guys? Do they look ready to contribute this year, do they look better than expected/during their HS senior year, or do they all need a redshirt year to get bigger or more prepared for the college level?

Devon Williams: He passes the eyeball test but clearly raw in routes from what we’ve seen, which is expected as he’s never been a full-time receiver. Maybe there is a limited role to fit his strengths (red zone option) but I would hope to see a redshirt year for him, and he’s a perfect guy who could benefit under the new rule to allow for four games of participation.
Abdul-Malik McClain and Eli’Jah Winston: I’m impressed with the size of both of these guys but haven’t seen them really do anything in PRP’s other than warm-ups.
Liam Douglass: Redshirt if at all possible. He’s been working as the 3rd team RT so unless there is an injury bug we shouldn’t need him to play. He’s added some bulk since last fall, which he needed to do.
Isaac Taylor-Stuart: It says something about the depth at corner in the PRP’s that we haven’t seen many reps for ITS. His athletic skills may warrant some special teams work early on but he’s another one that I would hope could redshirt, especially with so many bodies at corner now.

It says something about what Andy Enfield has done that this question could even be asked. I’ll admit it’s nice to look at the top of the basketball recruiting rankings and see the Trojans, and to know what kind of talent is coming to build off what has already been accomplished, but I’m not ready to say they will be moving ahead of football just yet. One of things about the USC football program is that they take everybody’s best shot every week while annually playing one of the toughest schedules in the country, that is part of their measuring stick. Basketball has shown flashes over the years of hoping to enter a more elite level but it hasn’t happened yet, it does feel right now like the chances are as good as they’ve been in a while.

Garry, it looks like the Trojans are stockpiling an incredible amount of talent on defense. Formerly thin areas like CB and LB suddenly have numerous potential starters with more coming in 2019’s class.

My question is this: I think we can expect the defense to be better in 2018. But is this the year or is it sometime in the near future? There will be a lot of DBs graduating and Gustin and Cam are seniors. It seems to me though that the talent coming up will be superior and deeper. But the defense might be fairly young next year especially in the secondary. So if it’s not 2018, what about 2019 or 2020 when all this young talent has a chance to mature.

Out of the next three years, when do you expect all the talent to be at a maximum so the Trojans can field the most dominant defense? Any reasons why? Thanks Garry.

The thing I will say about 2018 is that you don’t often have so many seniors who have played a lot, and with several of them bypassing the chance to enter the NFL draft. When you’re talking guys like Gustin, Smith, Marshall and Tell, any of the four of them could have left and it wouldn’t have been a huge surprise. To have them back leading the defense, along with other seniors like Ajene and Dorton, that’s a lot of leadership that knows Clancy’s system.

What I like about 2019 is the experience that we’ll see on the all-important defensive line with guys like Brandon Pili, Christian Rector and Marlon Tuipulotu leading the way. That’s not to mention Jay Tufele, Caleb Tremblay, Trevor Trout, Jacob Lichtenstein and Connor Murphy providing depth.

For 2020, the thought of Palaie Gaoteote and Solomon Tuliaupupu as veterans wreaking havoc at linebacker is enough to think we should be strong on defense, not to mention all the talent they will have around them at that point.

With all that being said, if we have Pili, Marlon and Tufele staying for their senior seasons in 2020 along with that linebacker crew and a guy like Talanoa Hufanga behind them I would be very excited to see what could be accomplished.

Hi Garry, wasn’t Drevno hired as not only as the RB coach, but also the run-game coordinator? That would mean input on blocking schemes, i.e. O line. Has there been any change on the way the O line is lining up, blocking, pulling, etc., that would show his influence? Or, is that something that would show more during fall camp?

Yes, he carries those titles and I think there’s a lot of hope from those Trojan fans who want to see more of a power run game influence that he will have an impact on the scheme that’s being run. Only Clay Helton knows for certain how much influence that will be but Helton talked in spring about things that we saw like more of the QB under center, more two-back sets, as being items that Drevno helped to bring. I look forward to seeing where that goes in fall camp and into the season.

GarryP, with all the interest in recruiting.
How long have the coaches been aware of and recruiting the top players before it is known to us keyboard qb’s?

It depends on the recruit but one thing I would say is that it’s a lot harder these days to keep things quiet on a recruit from a coaches perspective. There are too many camps, too many people covering recruiting, for a good player to stay under-the-radar for long.

OL: Jackson will head into fall camp with first shot at the starting LT role in competition with Clayton Johnston. Alijah Vera-Tucker will likely be the 2nd unit RG behind Andrew Vorhees.
TE: We haven’t seen much from Josh this summer but the expectations are there for him to continue to develop into a real pass-catching threat. I really like his potential.

WR: His spring was limited in part due to the birth of his son, and he hasn’t taken part in any summer drills. There is a lot of opportunity at the receiver spot, let’s see if he can take advantage.

DL: That trio is the foundation of our inside line group and I can’t wait to see how they progress this year. Pili has been as impressive as anybody this summer, Marlon has been able to do a lot of bag and sled work as he returns from a back injury and Tufele can see time at both nose and defensive tackle.

DE: Jacob has noticeably bulked up, which he needed to do. Echols is lining up behind Gustin.

LB: Levi is ready to get more of a role but I don’t know where it will come from. It could be WLB behind Houston or OLB behind Iosefa. Falaniko is also in the mix behind Jordan.

CB: Greg is one of my picks for a guy to really step up this year even in a crowded corner rotation. He plays with a real physical style.

S: Bubba has been alternating (along with Ykili Ross) as the starter opposite Marvell Tell in the PRP’s, while Isaiah has been primarily behind Tell. I’m guessing there will be some mixing and matching in fall camp to find the best combination. It will be good to see Pola-Mao in action after not seeing him since he got hurt in fall camp.

IMG vs Mater Dei will be played on the same night as USC’s dreaded Friday night game against Wazzu. I for one will be skipping the Friday DTLA traffic mess and opt for this epic high school matchup.

My question:
Would you be surprised to see a USC Coach or Analyst at the high school game considering the recruiting talent on the field to evaluate in person? Or is it all hands on deck for Wazzu?

Boo Larry Scott. One of the things I really don’t like about college games on Friday night is the impact on local high school games, and the Mater Dei-IMG game is a perfect example. But I wouldn’t expect to see any USC staffers at that game, they will have business at the Coliseum giving every effort to avenge last year’s loss to the Cougs.

Hey Garry do you happen to know if there are any plans to replace the outdated stadium lighting for the Coliseum? It seems light that would be a major necessary improvement.

The Coliseum renovation site says they will have improved stadium and field lighting, it doesn’t say anything about replacing the lights.

Garry-which incoming freshman from Mater Dei (if any) will be the first to crack the starting lineup in 2018 (excluding ST)?

I’m going to say Amon-Ra. He looks so polished in the PRP’s.

And will they ever upgrade the (Coliseum) wi-fi?

Yes, improved wi-fi is one of the key elements they have been promoting.