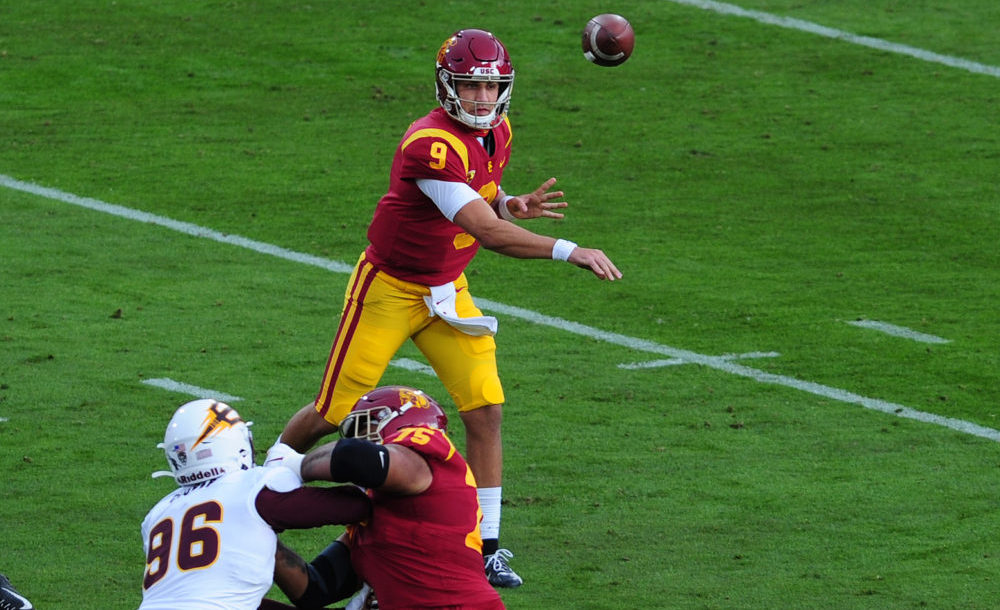 This week for the WeAreSC Mailbag, readers had plenty of questions about what they saw during USC’s season-opener against Arizona State, including running quarterbacks, offensive adjustments and how much success this team can have moving forward.

Q: What’s up with Katoa? Does it look like he’ll getting any playing time?

A: Clay Helton said that Tayler Katoa was working his way back from a hamstring issue during the end of camp but that he would be available this season. He did not play against Arizona State. I think he’d be a welcomed addition in providing depth at the linebacker spot, but Helton didn’t make it sound like they’d be counting on him for meaningful minutes early on this season as he works himself all the way back from his mission.

Q: Erik, why is it year after year we see DE’s and LB’s sucking in on the ball fake and either the RB’s or QB’s have easy runs around the D line for 10-20 yard gains? Do you see it as a coaching issue, or players that just can’t seem to hold the edge? I am totally fahklempt.

A: I would imagine that it’s tough to train yourself to see it at full speed when you aren’t used to seeing it full speed anywhere outside of that game. USC doesn’t run that, so the defenders aren’t getting a look at it outside of scout team work. It’s not like USC defenders are the only guys falling for that fake, as quarterbacks consistently burn defenses with it all over the country. It would seem to be just a discipline issue where guys are trying to do too much and not staying with their assignment. It’s definitely a frustrating thing to watch happen over and over again.

Q: Erik, two defensive things of note. I am so tired of seeing CB’s in particular with great position on the receiver grab unnecessarily and get a PI, and, I don’t understand how time and time again, especially vs. a running QB, why they don’t tell the end to forget about trying to run inside, trailing a back who may have the ball to make a play he can’t make instead of not even reading the play, staying home, playing the QB the whole way and protecting the edge? Take the guesswork out of all those option and/or RPO’s. It’s 2020 afterall.

A: I didn’t have a problem with the cornerback play in this game. Both Olaijah Griffin and Chris Steele got flagged in that Arizona State game, but I think they were penalties you live with considering how the officials were letting corners and receivers go at it during that game. You’re right in that it’s been a trend in the past and it’s worth watching to see if it continues in the Arizona game this weekend.

As for the question about the defensive ends and diving inside on fakes, you obviously aren’t the only one seeing that, as it’s the second time it’s been brought up. There were a couple notable instances in that Arizona State game where Jayden Daniels was allowed to escape easily around the end when every USC defender crashed down on a running back who didn’t wind up with the ball. That can’t continue to happen over and over, although Daniels might be the most talented runner the Trojans face this season at the quarterback position. I think a little bit of the issue is that when it’s played well by the defense, you don’t really notice it, because the quarterback hands it off and it just looks like a generic running play that goes for however many yards. But the second that end gets himself out of position for one play, it’s magnified in a big way because that quarterback can spot it immediately and take advantage.

Staying disciplined in every aspect is going to be huge for USC this weekend as Arizona will throw a number of wrinkles at the USC defense to make sure they’re assignment-sound.

Q: Erik, offense now. Every offensive scheme has its strengths and weaknesses. But, GH has to know that after last season he is going to see more of those 8 guys dropping back. Why is he not sending a couple of guys deep to clear out the seam routes downfield, in addition to the fact that he could then probably also have the option of going over the first line of the zone defense for bigger gains? Also, why so little pre-snap motion? Don’t we want the defense to have to think about jet sweeps, change of direction, having to change coverages, etc., etc.?

A: The USC offense is the USC offense right now and Harrell is pretty clear in saying that he wants them to run the plays they’re comfortable running. I take that to mean that he’s not looking to add a bunch of different things to combat what is coming on a week-to-week basis. But your point is a good one in that it’s probably time to understand that you’re going to be seeing the same looks from teams where it probably looks more like that BYU/Notre Dame film than anything that team has done before. At this point, it seems like getting a little bit from the running game and using the running backs in the passing game as checkdowns will suffice in keeping the ball moving forward. I don’t see Harrell looking to inject a bunch of new looks or wrinkles in an offense that is pretty simple and relies on repping the same plays over and over until they can be run against any coverage.

Q: Erik, do you think even when it’s obvious to us fans that it needs to be done, will Harrell and Helton swallow their pride and put in a short yardage package with the QB under center?

A: I’ll never say never on anything like this, but when a team takes a shotgun snap in the victory formation, I’d be shocked to see that team under center in any situation.

Q: Please put the weight back on Drake Jackson plant him on the DL and let him pass rush?

[No question just another one of my epic rants]

A: A lot of eyes will be on Jackson this weekend to see how he performs in the second game at this outside linebacker position. I think he has some potential there, but ultimately he probably needs to be rushing the passer on most downs.

Q: Hi Erik, considering the hype around the offense being in the second year, bunch of experience on both sides of the line coming back, and all the new hires, how surprised were you by the way this team performed last week against ASU? Do you believe this team and the coaching staff have what it takes to get to PAC championship and beat a team like Oregon based on the way each performed last weekend? Thanks.

A: I was surprised at the number of turnovers. Those were some careless fumbles by some veteran guys. And there were some poor decisions/performances on some short-yardage plays that led to turning the ball over on downs. Ultimately though, this USC offense put up 550+ yards against a defense that is being praised for shutting them down. I think there are a lot of things to clean up and I’m not totally buying yet that this offensive line is a step forward from last year, but it’s not like they struggled to throw for 200 yards or were held under 100 yards rushing. If you include the turnovers, that USC team this past weekend won’t make it to the Pac-12 championship game. If you assume the turnovers get cut down dramatically and USC wins a few turnover margins this season, I think the Trojans will cruise to the Pac-12 championship game. Once there though, it’s a different discussion if they line up across from Oregon. I don’t believe that performance, even if you eliminate the turnovers, would beat Oregon. I think this team has it in them to get to a point where they’re playing at the necessary level to do that, but I don’t know if we’ll truly know for another couple of weeks.